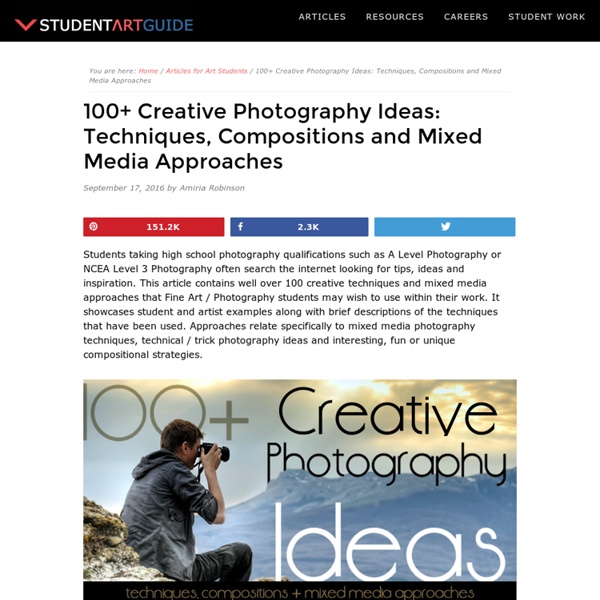 Students taking high school photography qualifications such as A Level Photography or NCEA Level 3 Photography often search the internet looking for tips, ideas and inspiration. This article contains well over 100 creative techniques and mixed media approaches that Fine Art / Photography students may wish to use within their work. It showcases student and artist examples along with brief descriptions of the techniques that have been used. Approaches relate specifically to mixed media photography techniques, technical / trick photography ideas and interesting, fun or unique compositional strategies. Note: The creative photography ideas listed in this article should not be explored haphazardly within a Photography course, but rather selected purposefully, if appropriate for your topic or theme. These approaches may or may not be relevant for your own photography project and should be chosen only in conjunction with advice from your teacher. Stitch photographs together, like Lisa Kokin:

How to Make and Use a Pinhole Camera You can load the camera either with film or fast photographic paper. Your choice of film or paper may depend in part on the exposure times. Paper, because it is less sensitive to light than film, will probably require an exposure of about 2 minutes for sunlit subjects. Top 10 Collage Artists: Hannah Höch to Man Ray From its roots in European Dadaism in the early years of the twentieth century, shadowing modernism and tracing its way through photography, collage is a medium as diverse as it is politically charged. Emerging as a reaction to the First World War, collage allowed artists to interact with existing materials – anything from newsprint and magazines to maps, tickets and propaganda and photographs – to rip them apart and then reassemble them, creating visually dynamic hybrids. Coined by Georges Braque and Pablo Picasso, the term ‘collage’ points towards a medium simultaneously serious and tongue-in-cheek; a technique that is deeply referential of the political world in which the works were produced. Via the assemblage of different objects and images, collage interrogates the fundamental concept of what it is to create art, whilst offering a prismatic reflection of the social change and upheaval of the twentieth century.

PHOTOGRAPHIC RESOURCE CENTER at boston university Please see below for a complete list of consulted sources. (This page was created on the occasion of the 2005 Awards) 1758 Johann Rudolf Geigy-Gemuseus (by 1901, becomes a company, J.R. 25 Minimal Photos In this series we showcase minimalistic type of photography. Producing a minimalistic photo is all about perspective, looking at things differently and choosing a specific amount of area to fill the frame. You can also check out the previous episode here – Minimal Photography #27

The Dreaded Peer-Teaching Observation - Advice By Bernard Schweizer On the scale of most anxiety-producing moments in teaching, few things top the dreaded peer observation. True, there are plenty of other sources of teaching angst, but none of them quite match the intense butterflies that develop in the stomach of a teacher about to be observed in the classroom by a peer. 3 Lesson Plans for High School Photography Classes Have you ever tried teaching a teenager science, math or technology? If you have, you know it can be a lesson in frustration. Let’s face it. Science, math and even technology are pretty dry subjects, and it’s hard to find ways for students to learn about them, without having to read thick textbooks, memorize equations and perform the same experiments over and over again. Right now we spend so much time teaching the science of exposure, focus and, yes, even composition, we forget the reason we picked up photography in the first place was to create art. Being a huge proponent of the “Learn by Doing” school of thought, I’ve come up with three captivating lessons you can use to teach a teenager, or even a whole classroom of teenagers, the ART of photography.

Art Propelled: MEND, MENDING, MENDED Brunivo Buttarelli. (Rock mended with metal) See website here. Mend: to make (something broken, worn, torn, or otherwise damaged) whole, sound, or usable by repairing ....Looking at these images I could add .... Mend: to beautify and to create art. "When the Japanese mend broken objects, they aggrandize the damage by filling the cracks with gold.

A History of Photography in Which the Camera Is Absent Wilhelm Röntgen, “Hand with Rings,” a print of one of the first X-ray photographs (shows the left hand of Röntgen’s wife, Anna Bertha Ludwig) (December 22, 1895), albumen photograph (courtesy Röntgen Museum, all images via Prestel) Joseph Nicéphore Niépce’s 1826 or ’27 view from his window in France is the earliest known photograph taken with a camera, but it wasn’t even his first photograph. Collaborating with his brother Claude, he started experimenting with photography in 1816, exposing images on paper soaked in silver chloride. Yet this earlier work, and much of the 19th century’s cameraless photography, remains a footnote to the history of the medium. Cover of ‘Emanations: The Art of the Cameraless Photograph’ (courtesy Prestel) (click to enlarge) Emanations: The Art of the Cameraless Photograph, recently published by Prestel/Delmonico Books, coincides with an exhibition of the same name at the Govett-Brewster Art Gallery in New Plymouth, New Zealand.

deanna templeton captures the perfect pleasure of skinny dipping The previous owner of artists Deanna and Ed Templeton's house in Huntington Beach, California was an elderly lady. As a result, their swimming pool is just the right size for someone a little over five feet tall to accomplish small laps in. "It's shallow, not that long, and shaped like a peanut," says Deanna. In her new book, The Swimming Pool (due for release through Um Yeah Arts in June), Deanna captures eight summers worth of visiting skinny dippers — friends, and later, friends of friends — suspended in the pool's turquoise water.

Art Propelled: CARNIVAL OF WHITE Noire et blanc . Mixed media on canvas by Amadea Bailey Yes, I'm still on my white hobbyhorse. Auto Mechanics Hilariously Recreate Renaissance Paintings US-based photographer Freddy Fabris had always wanted to pay homage to the Renaissance masters with his photos in some way, but he wasn’t sure how until he stumbled upon an auto-mechanic shop in the Midwest. This led to a brilliant series of portraits with auto mechanics reenacting famous Renaissance paintings. “Translating painting into photography was a challenge I looked forward to,” Fabris wrote on Huffpost. “I wanted to respect the look and feel of the originals, but needed to come up with a conceptual twist that would create a new layer to the original.”

40 Exemples de photos abstraites I just love the creativity we see in abstract photography. I love it when a photographer takes an otherwise ordinary shot and shoots it at just the right angle or focus to create a masterpiece of colors, patterns and textures. With abstract photography there is only one rule and that rule is there are no rules. Rules for composition and proper focus don’t really apply. Here are some great examples of abstract photography to inspire you to go out and create your next work of art.

The Crutch- Art Blog: Danielle Ezzo Danielle Ezzo is a Brooklyn based artist who’s hands have been in nearly every aspect of the art world. An accomplished photographer, her work oscillates between intimate, traditionally presented photographs exploring the relationships of her life and explorative prints incorporating drawing and painting processes. Ezzo’s work has been widely exhibited in New York from alternatives spaces to the ISE Cultural Foundation NY. Her work with Anagnorisis Fine Art, a curatorial organization that represents and exhibits emerging and established artists, gives Ezzo a unique perspective on the relationship between the studio artist and the commercial art market.

A Complete History of the Camera Phone Cameras in phones are ubiquitous. Few of us see the need to carry a dedicated device for taking photos or videos anymore, and digital camera sales have slumped. But how did we get here? Let’s take a look at the history of the camera phone. Samsung Sharp built the first camera phone The first cell phone with a built-in camera was manufactured by Samsung and released in South Korea in June of 2000.