Paintings That Will Make You Question Everything Wrong in This World 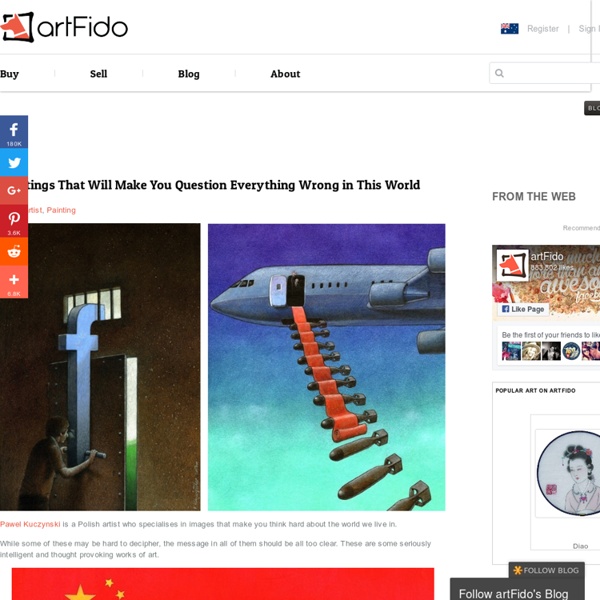 Pawel Kuczynski is a Polish artist who specialises in images that make you think hard about the world we live in. While some of these may be hard to decipher, the message in all of them should be all too clear. These are some seriously intelligent and thought provoking works of art. And to mix it up a bit, here’s something a little less depressing (but equally amazing)… the Blood Moon Lunar Eclipse which occurred the other night: And don’t forget, if you’re looking for a piece of original art to hang on your walls, check out artFido HERE!

Video: Watch hilarious Scottish independence referendum music medley by Sky News HAVE you had enough of all of this independence referendum chat? Wouldn't it just be better if the leaders in Scotland's debate took some time out from all the seriousness and did something completely different - like a night out at karaoke? Well now your wildest dreams have come true with Sky News' hilarious Scotland Megamix. The video begins with Alex Salmond belting out Queen's hit I Want to Break Free, before Better Together's Alistair Darling breaks into Rick Astley's internet sensation Never Gonna Give You Up. The First Minister then returns, lending his dulcet tones to Englebert Humberdinck's classic Please Release Me.

Emotions - How To Understand, Identify and Release Your Emotions - M.K. Projects What Are Emotions – Feelings? Different people define emotions in different ways. Some make a distinction between emotions and feelings saying that a feeling is the response part of the emotion and that an emotion includes the situation or experience, the interpretation, the perception, and the response or feeling related to the experience of a particular situation. For the purposes of this article, I use the terms interchangeably. Artist Photographs Women From 37 Countries To Show That Beauty is Everywhere Mihaela Noroc is a photographer from Romania that quit her job and started a new life. Two years ago she took her backpack and camera, and began to travel around the globe, photographing hundreds of natural women surrounded by their culture. Her project is called “The Atlas Of Beauty”, which is about our planet’s diversity shown through the portraits of women.

Experimental Game Turns Players into Poets and Writers What do British Romantic Era poets and video games have in common? The answer is Elegy for a Dead World, an unlikely game that leaves the players with “no game to play,” but to explore three long-dead civilizations, observe, and make notes... or stories — or poems — or songs. The three lost worlds feature beautiful scenery, moving music, and are inspired by Percy Shelley's Ozymandias, Lord Byron's Darkness, and John Keats' When I Have Fears That I May Cease to Be. They create a strong, moody atmosphere that becomes the breeding ground for feelings and ideas. How to use film creatively in class: teaching tips and ideas – live chat Wheeling out the TV and showing a movie has long been the teacher’s secret weapon to calm a distracted class at the end of term. But now many teachers in the UK are using film more creatively in their lessons. Former teacher Adwoa Oforiwa uses the storytelling element of films, such as Oliver Twist, to improve her students’ narrative writing. In a blog for the Guardian, Oforiwa writes: “In the classroom, film is more than just the carrot after the stick of ploughing through a book with young people.

25 maps that explain the English language by Libby Nelson on March 3, 2015 English is the language of Shakespeare and the language of Chaucer. It's spoken in dozens of countries around the world, from the United States to a tiny island named Tristan da Cunha. Meet the people who have volunteered to die on Mars Mars One, an interplanetary travel nonprofit, will soon select the next round of wannabe astronauts from the nearly 700 current finalists. While making a short movie about the competition for The Guardian, we at Stateless Media had a chance to speak to a few people vying for one of the coveted seats on a Mars One Spaceship. I learned the following: they are all really smart, incredibly brave, and a little bit crazy. Actually, they're a lot of bit crazy.

Use Popular Music to Improve Reading and Inspire Writing Teaching would be the easiest job in the world if following mandated curriculum and reading from your latest teacher’s edition meant all of your students would listen and learn. But we know that teaching involves lighting a spark in students that motivates, inspires, and makes them want to learn and achieve. We also know that what ignites a student’s passion for learning varies from student to student — there is no one-size-fits-all approach. Over the years, I’ve discovered that one way to engage almost every student, even those who are reluctant readers and writers, is through song. This week I’ll share with you some of the ways I use music to inspire, motivate, and teach reading and writing (along with life skills!)

Woman Draws a Self-Portrait Before And After the Use of LSD According to some users, it’s hard to exactly put into words what drugs do to your body and brain. Therefore, a reddit user placed drawings of herself on the site, made ​​before, during and after the use of LSD — while a friend talked her through it. The difference is shocking to say the least. Bonfire Night - Guy Fawkes'Day In each set there are a number of resources for whole class work, small groups and independent workers. There are symbol - supported stories, text onlystories, information sheets, recipes, crosswords, word searches and many more."

CYMATICS: Science Vs. Music If the world is made of vibrations then the power of those vibrations can literally change the world around us. To demonstrate this idea we want to share with you one of the best sound experiments ever filmed before. Check out this mind blowing video made by Nigel Stanford! Vibrations hold the world together. Isn’t it incredible to see with our eyes the power that sound has in the physical world on the macro level? No wonder music can literally change the vibration of what we are feeling. 6 Free Sites for Creating Your Own Comics In the days of cold, hard newsprint, only people who could draw were successful comic strip authors. In some cases, this resulted in comic strips that had very nice pictures, but weren't all that funny (cough, Blondie). Thankfully, the Internet has taught us not to accept an inferior form of comic artistry, but a more flexible one. Comic strip enthusiasts who want funny but don't care about pretty drawing can have their strips, those who want artistry have theirs, and even those with very specific tastes can find something just right. The best part about these developments is that they allow you, regardless of any talent as an artist or comedian, to create your very own comic strip. Depending on what you're going for, you can use one of these six sites to help you do it.

8 Fun and Effective Lesson Closures - Teach Starter Blog It’s happened to all of us, the intention is there but just as you’re thinking “I still have ten minutes…” the bell rings and the lesson ends with a frantic collection of work! Closing a lesson is just as important as the warm up, teaching instruction and independent work. A good closure will create a lasting impression and will have students reflecting on their own learning. It will also make a lesson more meaningful and relevant to the students and create a connection to previous knowledge. In an effective closure, the teacher will review and summarise a lesson, consolidate key information, create a link to new ideas and build anticipation for the next lesson. During a good closure, the students will be given an opportunity to express any concerns, ask questions and clarify their own understandings.

The Size Of Space As Depicted Here Is Truly Mind-Blowing Author: Jesse Herman of PowerfulPrimates The common understanding of physics, the universe, space travel and telescopes is not good. For people like us, there are pictures that illustrate how minuscule our world is compared to the vastness of infinite possibilites.