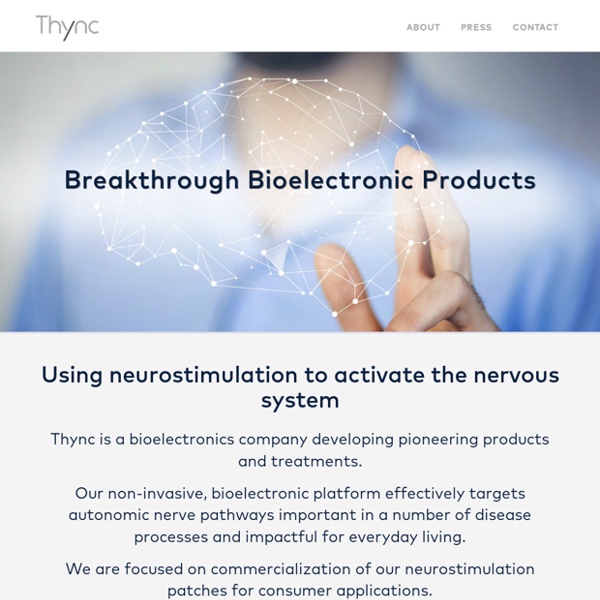 Wearable for state-of-mind shift set for 2015 How will neuroscience impact daily life? A more topical question might be, how will neuroscience play a role in the business of electronic-device vendors of headsets and other wearables? One entry to this niche is Thync, which is in the business of neurosignaling products. Their motto is "Forward thinking in every sense." They have a device that enables the person to shift the state of mind. Cleaning the oceans one marina at a time A simple solution to our oceans pollution We are excited to introduce our new invention helping to solve, educate and prevent our oceans pollution problems. The Seabin is a revolution in ocean cleaning technology. It will help create cleaner oceans with healthier marine life.

The Octave of Visible Light: A Meditation Nightclub — LIA CHAVEZ How do we achieve higher levels of awareness of what we’re experiencing without compromising the experience itself? — Lia Chavez Presented in partnership with Art Production Fund at The Cosmopolitan of Las Vegas in early 2015, The Octave of Visible Light: A Meditation Nightclub is a pop-up nightclub through which Chavez envisaged a futuristic discotheque that comes alive through the phenomenon of biofeedback. The Shadow Commander Last February, some of Iran’s most influential leaders gathered at the Amir al-Momenin Mosque, in northeast Tehran, inside a gated community reserved for officers of the Revolutionary Guard. They had come to pay their last respects to a fallen comrade. Hassan Shateri, a veteran of Iran’s covert wars throughout the Middle East and South Asia, was a senior commander in a powerful, élite branch of the Revolutionary Guard called the Quds Force. The force is the sharp instrument of Iranian foreign policy, roughly analogous to a combined C.I.A. and Special Forces; its name comes from the Persian word for Jerusalem, which its fighters have promised to liberate.

Alien Abduction or “Accidental Awareness”? “So then they roll me over on my back, and the examiner has a long needle in his hand. And I see the needle. And it’s bigger than any needle that I’ve ever seen.” Wahanda Rebrands To Treatwell, Eyes Up U.S. Entry Wahanda, the European hair and beauty marketplace that Japan’s Recruit Holdings majority acquired last year for $117 million (at a $240 million pre-money valuation), is getting a makeover of its own. Today the company has rebranded to Treatwell. The name comes from an acquisition made in June 2015 to expand its services in Holland, Germany and Belgium. The name change and brand refresh — led by the same team that worked on Airbnb’s last overhaul — comes as the company continues to eye up how best to expand to the U.S..

Thailand Health spa resorts Koh Phangan, health detox retreats The Sanctuary is located on the small, beautiful tropical island of Koh Phangan in the Gulf of Thailand, a sister island to Koh Samui. We are nestled into the corner of Had Tien Bay and are most easily accessed via Had Rin Town – normally by boat, or by car when the waves are too high for sea travel. The Sanctuary Thailand is “…quite magical.” – The Times UK – February 2008 Getting to Paradise 20 Thoughts To Help Relieve Anxiety and Depression “Our greatness lies not so much in being able to remake the world as being able to remake ourselves.” ~Gandhi For a majority of my life, I struggled with depression and anxiety. I’d sometimes go for weeks without leaving my house or communicating with friends and family. Like most people, my mind would race a mile a minute with depressive and anxious thoughts:

Is This the Most Misleading Image in Neuroscience? by Neurobonkers The CT scans above purport to show the difference between two three-year-old children, one that was loved by its mother and another that suffered neglect. The image has been used to support the claim that children's brains are "irrevocably hardwired" in the first few years of life, and to justify early intervention programmes and investment in early years education.

PolicyGenius Raises $15 Million For Its Online Price Comparison Insurance Brokerage Brooklyn-based PolicyGenius has raised $15 million in a new round of funding to expand its price comparison insurance brokerage service. Increasingly, old line industries are coming online, and insurance, one of the last holdouts, is no different. Founded by a former McKinsey consultant who worked with the insurance industry in 2014, PolicyGenius provides users with price comparison information on life insurance, long-term disability insurance, renters insurance and pet insurance. Offering content and advice, online quotes for policies, and an easy application process for consumers to get insurance, PolicyGenius has already reached 800,000 users by the end of 2015, according to chief executive Jennifer Fitzgerald. Fitzgerald would not comment on how many of those users are policyholders or acquired policies through PolicyGenius. “It’s a $2 trillion dollar industry and it really hasn’t changed that much,” says Case.