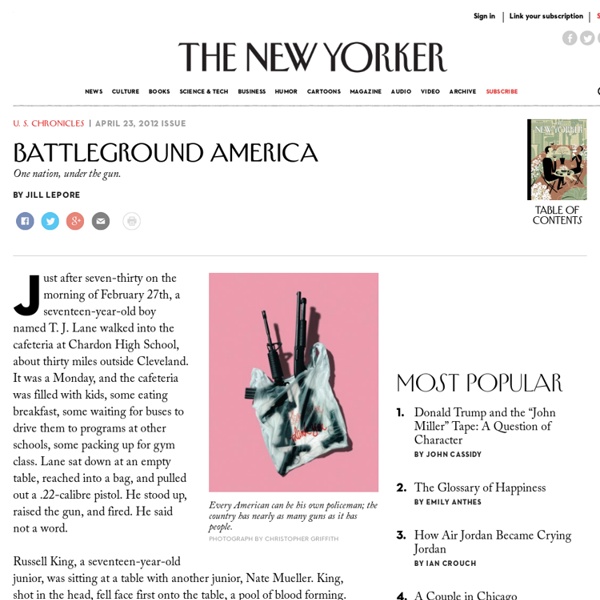 Just after seven-thirty on the morning of February 27th, a seventeen-year-old boy named T. J. Lane walked into the cafeteria at Chardon High School, about thirty miles outside Cleveland. It was a Monday, and the cafeteria was filled with kids, some eating breakfast, some waiting for buses to drive them to programs at other schools, some packing up for gym class. Lane sat down at an empty table, reached into a bag, and pulled out a .22-calibre pistol. He stood up, raised the gun, and fired. Russell King, a seventeen-year-old junior, was sitting at a table with another junior, Nate Mueller. Ever since the shootings at Columbine High School, in a Denver suburb, in 1999, American schools have been preparing for gunmen. At Chardon High School, kids ran through the halls screaming “Lockdown!” From the cafeteria, Frank Hall, the assistant football coach, chased Lane out of the building, and he ran off into the woods. Moments later, four ambulances arrived. Danny Parmertor died that afternoon.

Twelve facts about guns and mass shootings in the United States When we first collected much of this data, it was after the Aurora, Colo. shootings, and the air was thick with calls to avoid "politicizing" the tragedy. That is code, essentially, for "don't talk about reforming our gun control laws." Let's be clear: That is a form of politicization. When political actors construct a political argument that threatens political consequences if other political actors pursue a certain political outcome, that is, almost by definition, a politicization of the issue. It's just a form of politicization favoring those who prefer the status quo to stricter gun control laws.

Federal Court Rules Videotaping Police Is A First Amendment Right The Federal Appeals Court has ruled that video recording the police in a public place is a constitutional right for all U.S. citizens. This is a great win for the freedom movement. Public officials need to be held accountable for their actions.

Gun Control and Mass Shootings in the U.S. Mass shooters, although almost always male, in many other ways grimly echo the diversity of American life. Dylann Roof in Charleston is white. Elliott Rodgers at UC-Santa Barbara was of mixed English-Chinese origins. Major Nidal Malik Hasan of Fort Hood is of Palestinian descent.

How Elon Musk exposed billions in questionable Pentagon spending Elon Musk’s SpaceX had to sue before it got access to the Pentagon — but now, as it promises to deliver cargo into space at less than half the cost of the military’s favored contractor, it has pulled back the curtain on tens of billions in potentially unnecessary military spending. The entrenched contractor, a joint operation of Boeing and Lockheed Martin called the United Launch Alliance, has conducted 106 space launches all but flawlessly, but the cost for each is more than $350 million, according to the Government Accountability Office. SpaceX promises launches for less than $100 million. Story Continued Below

Refuting Anti-Gun Control Arguments © Josh Sager – January 2012 The recent rash of mass shootings in the United States is simply part of a long-term trend of gun violence unique to our country. The Sandy Hook school shooting is tragic—it caused the death of 20 children—but the true tragedy is that such a shooting is only the tip of the iceberg of our country’s gun problem. According to FBI statistics, 46,313 Americans were murdered with firearms during the time period of 2007 to 2011. 40 Years in Solitary Confinement: US 'Pushing Boundaries of Cruel, Inhuman, Degrading Treatment' Today marks the dark anniversary of 40 years of solitary confinement of Albert Woodfox and Herman Wallace at Angola Prison in Louisiana. Herman Wallace, left, and Albert Woodfox in Angola prison in Louisiana. Amnesty International will hand over a 65,000-signature petition to Louisiana Governor Jindal today demanding an end to Woodfox and Wallace's solitary confinement. The 40-year isolated incarceration of Albert Woodfox and Herman Wallace "pushes the boundaries of cruel, inhuman and degrading treatment, and flies in the face of international standards to which the US is a party,” stated Everette Harvey Thompson, Southern Office Regional Director of Amnesty International USA. Describing the cell he's lived in for 40 years, Herman Wallace says, "I can make about four steps forward before I touch the door."

Libertarian Party Why Libertarians Support Equal Rights for America's Gun Owners Libertarians, like other Americans, want to be able to walk city streets safely and be secure in their homes. We also want our Constitutional rights protected, to guard against the erosion of our civil liberties. In particular, Libertarians want to see all people treated equally under the law, as our Constitution requires. America's millions of gun owners are people too. What Can Stop Kids From Dropping Out A decade ago, Georgia State University — racially segregated until the 1960s and a stone’s throw from the Rev. Dr. Martin Luther King Jr.’s birthplace — was a poor-performing, big urban institution with low graduation rates and yawningly wide racial gaps. But even as the student body has become poorer and more ethnically and racially diverse, the overall graduation rate has climbed to 56 percent from 41 percent. Even more remarkably, minority students, first-generation students and low-income students with federal Pell grants are earning degrees at a higher rate than their white peers.

NRA: full statement by Wayne LaPierre in response to Newtown shootings The National Rifle Association's 4 million mothers, fathers, sons and daughters join the nation in horror, outrage, grief and earnest prayer for the families of Newtown, Connecticut ... who suffered such incomprehensible loss as a result of this unspeakable crime. Out of respect for those grieving families, and until the facts are known, the NRA has refrained from comment. While some have tried to exploit tragedy for political gain, we have remained respectfully silent. Now, we must speak ... for the safety of our nation's children.

The Second Amendment, Firearm Safety, Banning Machine Guns, Hunting Rights, Assault Weapons and the History of Gun Ownership Laws The early explorers and settlers of the United States took full advantage of the abundant game to be found in the new lands they were beginning to inhabit. The ability to hunt wild animals for food not only offered a means for survival, but also allowed settlers to expand their territories farther west. It was taken for granted that every man, starting in his teenage years, would know how to shoot a rifle. The Second Amendment to the U.S. Constitution was ratified in 1791, as a direct result of the Revolutionary War; without access to weapons, the colonists would not have been able to defeat the British troops.

The “Cadillac Tax”: Driving Firms to Change Their Plans?   Liberty Street Economics Jason Bram, Nicole Dussault and Maxim Pinkovskiy Since the 1940s, employers that provide health insurance for their employees can deduct the cost as a business expense, but the government does not treat the value of that coverage as taxable income. This exclusion of employer-provided health insurance from taxable income—$248 billion in 2013, according to the Congressional Budget Office—is a huge subsidy for health spending. Many economists cite the distortionary effects of this tax subsidy as an important reason for why U.S. health care spending accounts for such a large share of the economy and why spending historically has grown so rapidly. In this blog post, we focus on a provision of the Affordable Care Act (ACA) that is intended to chip away at this tax subsidy, the colloquially labelled “Cadillac Tax” on the priciest employer-provided health insurance plans.

Americans are becoming numb to gun violence. For teachers, it's all too real As a teacher, I expected to return to my classroom after the holidays refreshed and ready for the second half of the year. That's happened to a certain extent, but I can't ignore the ongoing violence in America's schools. On 14 January, a 12-year-old boy in New Mexico came to school with a sawed-off, 20-gauge shotgun and opened fire, wounding two students before a teacher was able to persuade him to put the gun down. On 17 January, two high school students were injured at a charter school in Philadelphia when another teen opened fire. On 20 January, a student sitting in the parking lot of Widener University in Chester, Pennsylvania was injured by an unknown gunman. On 21 January, a teaching assistant was killed by a gunman at Purdue University in West Lafayette, Indiana.

Firearms: Ownership, laws & and the case for community mobilization Abstract The United States (U.S.) currently ranks number one in the world in both the quantity of privately owned guns and the rate of private gun ownership. These privately owned firearms, which include rifles, shotguns and handguns, are predominantly owned by middle-aged, 35-54, white men, but the gaps have been steadily closing over the years, especially depending on the type of firearm, in all areas including gender, age, race, education level, political affiliation and geographic location.