The Art of Conversation: Timeless, Timely Do's and Don'ts from 1866 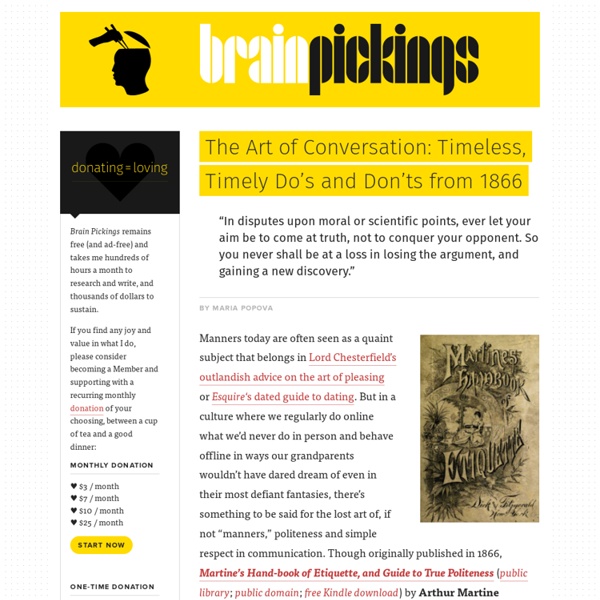 By Maria Popova Manners today are often seen as a quaint subject that belongs in Lord Chesterfield’s outlandish advice on the art of pleasing or Esquire‘s dated guide to dating. But in a culture where we regularly do online what we’d never do in person and behave offline in ways our grandparents wouldn’t have dared dream of even in their most defiant fantasies, there’s something to be said for the lost art of, if not “manners,” politeness and simple respect in communication. Martine contextualizes his mission: Politeness has been defined as an “artificial good-nature;” but it would be better said that good-nature is natural politeness. But he offers an important disclaimer: [Politeness] must be cultivated, for the promptings of nature are eminently selfish, and courtesy and good-breeding are only attainable by effort and discipline. Among Martine’s most timeless advice are his guidelines on the art of conversation, to which an entire section of the book is dedicated. Be selective.

Why the Art of Conversation Is Key to Sharing When Jason Simon graduated college, he had little tolerance for others’ beliefs. In hindsight, he pointedly observes, “I was inexperienced and lacked confidence. I thought I knew what truth was – what was in the best interest of humanity – and was resistant to other points of view.” Simon wasn’t aware of his close-mindedness or the effect it had on people until a close buddy told him, “Even your friends are intimidated. They’re afraid to be honest with you, afraid you’ll judge them.” To his credit, Simon did something about it. Jason Simon of Caffeinated Conversations. And today, at 30, he’s made a career out of it. Simon is right: conversation is everything. Conversation is the basic unit of human sharing. Conversation is the engine that drives relationships. Two women enjoying a bit of sun, conversation, and coffee at Madame Rourkes Coffee Shop. Conversations tell us who we are. At its best, conversation is a non-zero-sum game. Two boys talking.

What Tumblr Is and How To Use It: A Practical Guide You may have noticed a lot of people on Twitter grumbling about Tumblr’s outages, the latest of which started on Saturday and have continued, in sometimes day-long chunks, through today. The social network’s problems come at a time when their userbase is growing rapidly, along with their pageviews, though this stumble threatens to curtail that. “﻿﻿﻿…keeping up with growth has presented more work than our small team was prepared for,” says the staff blog. “But we are determined and focused on bringing our infrastructure well ahead of capacity as quickly as possible.” If you’re not one of Tumblr’s 7.5 million users, you might not even know what the heck it is or why there’s such a fuss. Tumblr is a microblogging site that sits somewhere between Twitter and a traditional blog. Depending on the type of post, Tumblr serves up a different template. Just as with Twitter, users must Follow a Tumblr blog to keep up with it. Tumblr makes link-blogging easy. Tumblr Tips 9 11 Google +6 4

The Art of Conversation By Laine Bergeson and Courtney Helgoe / July/August 2012 On a sunny day last fall, Taylor Baldry set up a card table and three folding chairs on a well-traveled street corner in Minneapolis. He stationed a sandwich board nearby that announced “Free Conversations.” Almost immediately, a couple joined him, and they spent the next 20 minutes discussing ghost stories, a topic they selected from Baldry’s menu of conversation options, which on this day ranged from the weather and dinosaurs to “things you can do with an egg.” When the couple left, others sat down, and Baldry spent the afternoon chatting amiably with a steady stream of strangers, doing his part to restore the practice of in-person conversation. Since that October afternoon, Baldry, a performance artist, has taken his Conversationalist project to parks, theaters and other venues in the city, and has learned something about his fellow citizens: People are starved for authentic interactions. How to Start a Conversation Phone-gazing.

The strength of ‘weak signals’ As information thunders through the digital economy, it’s easy to miss valuable “weak signals” often hidden amid the noise. Arising primarily from social media, they represent snippets—not streams—of information and can help companies to figure out what customers want and to spot looming industry and market disruptions before competitors do. Sometimes, companies notice them during data-analytics number-crunching exercises. Or employees who apply methods more akin to art than to science might spot them and then do some further number crunching to test anomalies they’re seeing or hypotheses the signals suggest. Engaging at the top For starters, given the fluid nature of the insights that surface, it’s often useful to get senior leaders actively involved with the social-media sources that give rise to weak signals. To find out, the executive commissioned research to quantify what had started out as a qualitative hunch. Listening and mapping Spotting visual clues Crossing functions

The Seven Deadly Sins of Expat Networking : Blog Wednesday 16th May 2012 Quite often the success of an expatriate assignment can hinge on the speed at which you meet like-minded people with whom you can form friendships and who can help you to settle into life away from home. In order to do this it is often extremely important that you start to network with fellow expatriates and locals alike and many expats are all too aware of the need to get out there and socialize. However, many expats make the same mistakes that impact their ability to meet new friends. Here is our lowdown of seven mistakes that expats should avoid when meeting new people. 1) Judging on First Impressions Do you ever find yourself meeting new people and instantly making a decision as to whether they are a potential suitable friend for you or not? 2) Failing to Follow Up When you are new to a country you will meet a lot of new people and you will find yourself with a large number of cards and contact numbers. 3) Not Listening 4) Talking About Yourself Too Much

the art of conversation The Debunking Handbook: now freely available for download Posted on 27 November 2011 by John Cook The Debunking Handbook, a guide to debunking misinformation, is now freely available to download. Although there is a great deal of psychological research on misinformation, there's no summary of the literature that offers practical guidelines on the most effective ways of reducing the influence of myths. The Debunking Handbook boils the research down into a short, simple summary, intended as a guide for communicators in all areas (not just climate) who encounter misinformation. The Handbook explores the surprising fact that debunking myths can sometimes reinforce the myth in peoples' minds. It also looks at a key element to successful debunking: providing an alternative explanation. The Authors: John Cook is the Climate Change Communication Fellow for the Global Change Institute at the University of Queensland. Professor Lewandowsky is an Australian Professorial Fellow and a cognitive scientist at the University of Western Australia.

The Art of Conversation: Evening Talk | Wisconsin Institute for Discovery Good conversation lies at the heart of many collaborations and discoveries. But it’s not always easy to translate ideas to written and spoken words. At the Art of Conversation , WID’s Distinguished Scholars are bringing in national journalists, bloggers and successful scientists to lead engaging workshops and an evening talk to share tips on how to confidently and expertly portray science and ideas. Whether it’s making an elevator pitch, translating a research finding or experimenting with a science blog, participants will gain real-world skills they may not normally be exposed to in their professional training. Follow The Art of Conversation on our website or on Twitter #WIDArtConvo . Award-winning journalists reveal behind-the-scenes stories of how conversation leads to discovery. When: April 16, 2013, 7 p.m. Where: The H.F. Free and open to the public Featuring Peter Greenberg , distinguished scholar and travel editor, CBS News Jennifer Ashton , senior medical contributor, ABC News Dr.

The 7 Greatest Communication Successes Of 2011 Welcome to Part 2 of my annual list of who’s been naughty and who's been nice as a speaker or communicator. This week, the winners. Occupy Wall Street: "We are the 99%" is a brilliant use of language to tell an important story. The OWS group has channeled the anger of citizens toward the businesses and business leaders they believe have benefited at their expense. Like other successful slogans, the statement at once connects the dots for supporters: There are heroes, villains, and an emotional component that is plaintive yet strong. I believe this rallying cry is here to stay and demands for attention and redress will grow. Chad "Ochocinco" Johnson: We can quibble over the nature of this pro-football player’s public "sharing," but what we should agree on is the skill with which he has managed his enormously successful personal brand. Steve Jobs: Jobs was the greatest CEO presenter of all time. As with the failures, I'm sure I left someone out. Happy New Year!

The Art of Conversation | Johan Lundh Johan Lundh: When I asked you if I could interview you about the ‘art of conversation’, you mentioned that you had noticed a kind of fetish for the term ‘conversation’ in the mass media, which is partly perhaps why there is so much interest in the subject these days within the art world as well. Could you elaborate on this? Monika Szewczyk: I’m not sure if art has followed the mass media so directly in this case – that is if, in the art world, we (and I don’t want to take myself out of this equation) fetishize conversation for the same reason mass media do. I think, in the media, the fetish has a lot to do with some notion of interactivity and democratic participation. And with the telecom boom, calling back, emailing or posting to a television or radio station is increasingly easy and increasingly part of the ritual. If I’m starting to sound judgmental, it is on purpose. Johan Lundh: In a world infatuated with the concept of conversation, you seem rather skeptic about the idea itself.