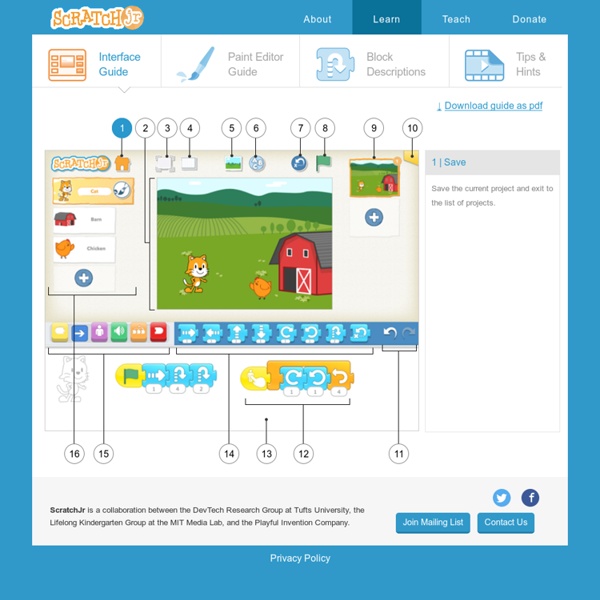 Tips & Hints Tips and hints that you might find useful as you explore ScratchJr. For answers to more general questions about ScratchJr, see the Frequently Asked Questions. Learn how to make a new project, rename an existing project, and delete a project. Watch video Make a simple script by connecting blocks together. Learn how to add characters to your project. Use trigger blocks to specify when a script should run. You can share projects by email. The Sample Projects library is a collection of eight pre-made projects that use a range of blocks and features to show you the variety of projects you can make with ScratchJr. Character List Scrolling If there's a scroll bar in the Character List on the left of the Stage it means you that you have more characters in your project than fit in the list on the screen. Copying Characters To copy a character and its scripts, you can drag the character from the list of characters on the left over to the list of pages on the right. Moving Backwards

Helping Young Children Experiment, Explore, and Express Themselves with Code — Scratch Foundation Blog Helping Young Children Experiment, Explore, and Express Themselves with Code Below is an excerpt from The Official ScratchJr Book: Help Your Kids Learn to Code, an easy-to-use, hands-on guide for parents and educators. Written by the creators of ScratchJr, Marina Umaschi Bers (Professor at the Eliot-Pearson Department of Child Study and Human Development at Tufts University) and Mitchel Resnick (Professor of Learning Research at the MIT Media Lab), The Official ScratchJr Book is the perfect companion to the ScratchJr app. With ScratchJr, young children can bring their stories and ideas to life by connecting blocks of code to make characters move, jump, dance, and sing. Each chapter includes several activities that build on one another, culminating in a fun final project.

Scratch Programming Resources, Tutorials, and Books In this clip, Cameron gives us the quick introduction to what’s different in the PBS Kids ScratchJr app that was released today. You can find it in your app store. Some below the fold tech stuff: Despite a recent post promoting the Andy Android Emulator, I had to install a different emulator (Bluestacks) to get the PBS version of Scratch to run. Andy runs Android 4.2 and the PBS Kids ScratchJr app requires Android 4.4.

ScratchJr The current ScratchJr logo. The first prototype of the program. ScratchJr is a mobile application released on July 30, 2014 for the iPad. It is developed by Tufts University, with grants from the National Science Foundation, to allow young kids (the target is age 5 to age 7) to easily learn programming with a system based on Scratch. The goal of ScratchJr is to "develop and study the next generation of innovative technologies and curricular materials to support integrated STEM learning in early childhood education Teachers Using Trello: How To Foster Genius In The Classroom D’aww… the feeling is mutual, guys. Are you smarter than a fifth grader? Surely not these Geniuses, because they’re using Trello to answer the tough questions. The concept of Genius Hour has become a popular mechanism for educators to encourage their students to explore their interests. To avoid gaps in learning, much of the US curriculum is standardized. The Genius Hour movement, however, is a great way to inject open ended exploration into different aspects of our world.

Making things... Learning Things [Note: Updated, April 22, 2015] App Name – ScratchJrCost – FreeWebsite – Tablets – iOS and AndroidDeveloped by – Massachusetts Institute of Technology and Tufts UniversityiOS Download – Download – What is ScratchJr? Scratch Scratch Jr History[edit] Supported devices/OSs[edit] It was launched in July 2014 for iPad ; an Android version was released in March 2015.[3] It should be followed by a web-based version later in 2015.[4] User interface[edit] ScratchJr App Review reviewed by Steve Bambury CONCEPT: The acclaimed Scratch coding system comes to the iPad, tweaked to suit even younger students. DELIVERY: Scratch. 7 Characteristics Of Teachers Who Effectively Use Technology 7 Characteristics Of Teachers Who Effectively Use Technology by TeachThought Staff Ed note: This post has been updated with an updated visual from Sylvia Duckworth, who took our graphic from alwaysprepped.com (now getalma) post and created the above visual.