23 Tools and Resources to Create Images for Social Media 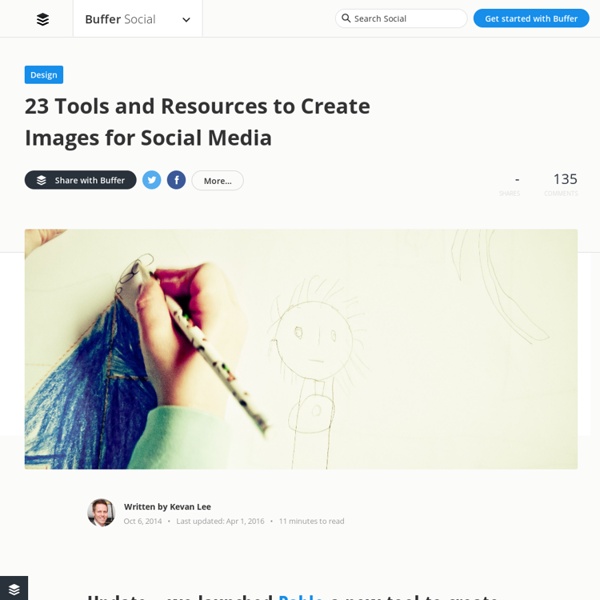 Update – we launched Pablo a new tool to create beautiful images for your social media posts in under 30 seconds You can use Pablo right from the get-go, no need to login or create an account. Just quickly create amazing images super fast. You can try out the first version of Pablo right now – no login required. Just head to and give it a try! We’d love to hear your thoughts about Pablo on Twitter, just hit us up @buffer and hope it makes creating images for your social media posts much easier for you. Ok, back to the blogpost! Through experimentation and iteration, we’ve found that including images when sharing to social media increases engagement across the board—more clicks, reshares, replies, and favorites. Using images in social media posts is well worth trying with your profiles. As a small business owner or a one-person marketing team, is this something you can pull off by yourself? Got a favorite image creation tool? How to Create Images for Social Media – Tools 1. 2. 3. 4. 5. 7. 8.

Social media stats: end-of-year state of play As we barrel towards the end of 2014, let’s round-up how all the major players in the social web currently stand. Has the mighty Facebook finally been usurped by a hipper, younger network? Has Snapchat brought a rain of fire down on its instant messaging competition? Has Ello caused enough of a stir to worry the more marketing filled platforms? When was the last time someone added you to their Google+ circles? Let’s see if we can answer at least three of these questions… C# - The New and Improved C# 6.0 Although C# 6.0 isn’t yet complete, it’s at a point now where the features are close to being finalized. There have been a number of changes and improvements made to C# 6.0 in the CTP3 release of the next version of Visual Studio, code-named “14,” since the May 2014 article, “A C# 6.0 Language Preview” (msdn.microsoft.com/magazine/dn683793.aspx). In this article, I’ll introduce the new features and provide an update on the features discussed back in May. I’ll also maintain a comprehensive up-to-date blog describing updates to each C# 6.0 feature.

How to Choose Social Media Images Are you one of Instagram’s over 300 million users? Are you behind any of the 30 billion images that have been pinned on Pinterest? Have you watched some of the over 1 billion Facebook videos viewed on the social network every day? I’ve yet to come across someone arguing that images don’t work on social media. We all love visuals, and the statistical evidence is there to back it up. Online business presentation software to create free, cool, animated, powerpoint video alternatives Sign up to Powtoon Already have an account? Log In Or Sign up with Google Sign up with Facebook more Create Texting Fiction to Keep Your Teens Engaged Texting fiction is a new emergent genre of fiction writing that is becoming very popular among teens and I have to say when I started reading a few of these creations I can see why. Basically the narrative is structured as a phone based text conversation and can include images and videos as well as text and audio messages. The reader taps their way through the messages as a kind of voyeur, following the interaction between the two people to build their understanding of the story. The most popular platforms at present for marketing this type of genre are: These apps are freemium and allow you to download and read through the narrative, but if you are on a free version you may have to wait a few hours for the next part of the story or in some cases you don't get some of the rich media elements of the story. This is a great format for language learning as the texts are very similar to spoken conversations and the chunks are short and easy for students to read.

Why You Should Pay More Attention to Google+ and LinkedIn Google+ and LinkedIn get a bad rep among social media marketers. Granted, they’re not established and recognized beasts like Facebook and Twitter, but maybe that’s a good thing. In a recent study by Shareaholic, researchers focused on social media post-click engagement across nearly all the major social media networks. Why Games May Become the Education of the Future Parents and teachers are often wary of letting kids spend time playing video games, and would rather they spend time playing outside or reading. But a number of game developers are introducing exciting mods of popular games like Minecraft and SimCity into the classroom and re-imagining how video games can support traditional educational objectives, like , math, and physics. Why Video Games? It may seem obvious to some, but there are plenty of people out there who are wondering why we would even consider video games as a learning tool in the first place.

Collaborative Story Writing for the BYOD Classroom Pages Wednesday, 6 September 2017 Collaborative Story Writing for the BYOD Classroom What's the Best Use of Your Time on Social Media? 2.6K Flares Filament.io 2.6K Flares × Social media management can be a full-time job, and even for those who do social along with any number of other tasks, social media marketing can still take 10 or more hours every week. So what would you do if you only had 30 minutes to spend on social media?