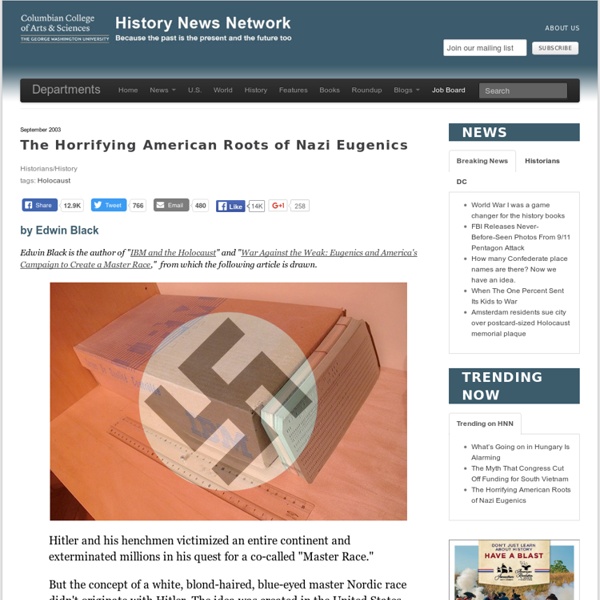 Hitler and his henchmen victimized an entire continent and exterminated millions in his quest for a co-called "Master Race." But the concept of a white, blond-haired, blue-eyed master Nordic race didn't originate with Hitler. The idea was created in the United States, and cultivated in California, decades before Hitler came to power. California eugenicists played an important, although little known, role in the American eugenics movement's campaign for ethnic cleansing. Eugenics was the racist pseudoscience determined to wipe away all human beings deemed "unfit," preserving only those who conformed to a Nordic stereotype. Elements of the philosophy were enshrined as national policy by forced sterilization and segregation laws, as well as marriage restrictions, enacted in twenty-seven states. California was considered an epicenter of the American eugenics movement. Eugenics was born as a scientific curiosity in the Victorian age. How? Hitler studied American eugenics laws.

A Science Odyssey: People and Discoveries: Eugenics movement reaches its height Eugenics movement reaches its height1923 Photo: This family was awarded Honorable Mention, Large Family Class, as part of a eugenics exhibit at a Kansas fair in 1923. The term eugenics comes from the Greek roots for "good" and "generation" or "origin" and was first used to refer to the "science" of heredity and good breeding in about 1883. Within 20 years, the word was widely used by scientists who had rediscovered the work of Gregor Mendel. Mendel had meticulously recorded the results of cross-breeding pea plants, and found a very regular statistical pattern for features like height and color. Eugenics While eugenic principles have been practiced as far back in world history as Ancient Greece, the modern history of eugenics began in the early 20th century when a popular eugenics movement emerged in Britain[8] and spread to many countries, including the United States and most European countries. In this period, eugenic ideas were espoused across the political spectrum. Consequently, many countries adopted eugenic policies meant to improve the genetic stock of their countries. Such programs often included both "positive" measures, such as encouraging individuals deemed particularly "fit" to reproduce, and "negative" measures such as marriage prohibitions and forced sterilization of people deemed unfit for reproduction. People deemed unfit to reproduce often included people with mental or physical disabilities, people who scored in the low ranges of different IQ tests, criminals and deviants, and members of disfavored minority groups. History[edit]

Teaching the Vietnam War With Primary Sources From The New York Times - The New York Times “Images of the Vietnam War That Defined an Era” (15 photographs) “Vietnam War Photos That Made a Difference” (10 photographs) Half a century after the nation’s fateful early missteps into the quagmire, what are Americans likely to remember about the Vietnam War? Albigensian Crusade The Albigensian Crusade or Cathar Crusade (1209–1229) was a 20-year military campaign initiated by Pope Innocent III to eliminate Catharism in Languedoc, in the south of France. The Crusade was prosecuted primarily by the French crown and promptly took on a political flavour, resulting in not only a significant reduction in the number of practising Cathars, but also a realignment of the County of Toulouse, bringing it into the sphere of the French crown and diminishing the distinct regional culture and high level of influence of the Counts of Barcelona. The medieval Christian radical sect of the Cathars, against whom the crusade was directed, originated from an anti-materialist reform movement within the Bogomil churches of Dalmatia and Bulgaria calling for a return to the Christian message of perfection, poverty and preaching, combined with a rejection of the physical to the point of starvation. Origin[edit]

Sterilization Abuse in State Prisons: Time to Break With California's Long Eugenic Patterns  This post was co-authored with Tony Platt The recent revelation that 148 female prisoners in two California institutions were sterilized between 2006 and 2010 is another example of the state's long history of reproductive injustice and the ongoing legacy of eugenics. The abuse took place in violation of state and federal laws, and with startling disregard for patient autonomy and established protocols of informed consent. In the past, sterilization of vulnerable populations in the name of "human betterment" was carried out with legal authority and the backing of political elites.

The plot to create Britain’s super race Among them was five-year-old Juliet Phelps Brown, now Juliet Hopkins, whose parents were convinced that Britain was about “to become a province of Germany” and who could not countenance living in such a place: “How could academics live with people who burned books?” Now 77 and herself an accomplished academic still teaching in her specialist area of child psychotherapy, Hopkins remembers standing on the deck as the ship pulled out into the Mersey, holding the hand of a three-year-old girl who needed consoling after she had dropped her teddy bear over the side. “It was a dreadful voyage,” she says.

What is McCarthyism? And how did it happen? - Ellen Schrecker Interested in learning more about McCarthyism? Start with the educator, Ellen Schrecker. She is the author of: Many Are the Crimes: McCarthyism in America and The Age of McCarthyism: A Brief History with Documents. What was the House Un-American Activities Committee? Read about it here. Top 10 Most Overlooked Mysteries in History Mysteries Over the last few months we have gone through 30 of the worlds greatest mysteries but what we haven’t covered are ancient mysteries. This list aims to put that right! Here are ten great unsolved mysteries of science. Do you have a theory that might solve one of these mysteries? The House of Lords is full of sycophants, failed MPs, and political donors. Sack them all Defenders of the House of Lords admit to its absurdities, but like to pretend that it still performs a valuable role in our constitution. “If it ain’t broke, don’t fix it,” is one of their favourite mantras. But the Lords is broken, and should be abolished as soon as possible. Every argument used to justify its existence is wrong.

5 Good Resources for Teaching and Learning About World War II This morning I went to the World War II museum in New Orleans. It is a fantastic museum. The museum does a masterful job of mixing artifacts and oral histories into the greater context of World War II. Anne Boleyn – The Rise (Guest Post) Guest Article By P. Deegan Part 1: The Rise – Mainly Katherine vs Anne This article was going to be about the downfall of Anne Boleyn. However I believe her downfall must be seen within the context of their whole relationship so this article now covers her rise as well as her fall.

S.E: History News Network is a helpful source when looking at specific movements from a historical perspective, particularly Eugenics in this case. This article explores the social context and the ethical issues that may arise revolving around eugenics. by sc215 Apr 23

EM: History News Network is located at George Mason University. It was formed to help address current events with historical perspective. This article would be useful to anyone who is interested in eugenics or genetic discrimination. by sc215 Apr 14