The ULTIMATE gag gift - SWEET revenge at its finest 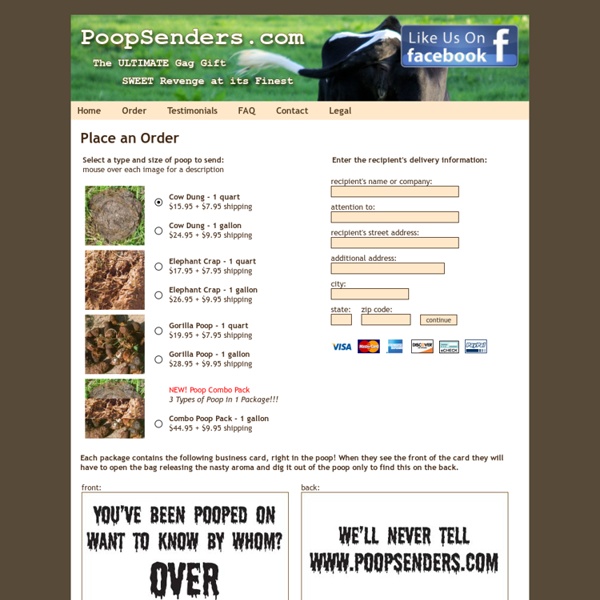 Bruiser: A street sweeper's tales. 25 Hilarious YouTube Comments to Tickle Your Funny Bone YouTube is one of the largest video-sharing websites, which was created by three former Paypal employees in February 2005, on which users can upload, view and share videos. We can safely assume that most of you are frequent visitors of the famed video site, and the greater majority of you may have noticed and participted in the discussion at comment section. As most of you will notice, the majority of users who comment on these videos either get into heated debates amongst themselves over the video in question, or end up bantering one another over topics which do not even involve the video itself. Here at Fungagz we conducted a quest and explored several YouTube videos with their slew of outrageous comments, and collected these “25 Hilarious YouTube video Comments” that will definitely tickle your funny bone and make you laugh with wonder at the type of feedback users tend to post on the famed vid-site. Enjoy 1. 2. 3. 4. 5. 6. 7. 8. 9. 10. 11. 12. 13. 14. 15. 16. 17. 18. 19. 20. 21. 22.

page corner bookmarks | I Could Make That This project comes to you at the request of Twitterer @GCcapitalM. I used to believe that a person could never have too many books, or too many bookmarks. Then I moved into an apartment slightly larger than some people’s closets (and much smaller than many people’s garages) and all these beliefs got turned on their naïeve little heads. But what a person can always look for more of is really cool unique bookmarks. Page corner bookmarks are cute, practical and deeply under-represented in the world.* They’re easy to make, easy to customize, and will set you apart from all those same-same flat rectangular bookmarks. If you like this tutorial, here are a couple others that might be up your alley. If you’re loving the toothy monster vibe, check out these simple monster heating bags, filled with rice or wheat and entirely microwavable, to keep toes or fingers or tummies warm during the chilly winter months. What you’ll need: Putting it all together: 1) Follow steps 2 and 3 from above.

20 Badass Famous Last Words - StumbleUpon Some of the grandest, most controversial men in history have ended their lives with a poignant, biting farewell. Some laugh at death, others laugh at their killers, still others offer a culminating statement of wisdom. These colorful individuals ensured their fateful last words eloquently summarized their existences. 1. Caesar Augustus was the first ruler of the Roman Empire, leading Rome for 41 years. “Have I played the part well? 2. The author of The Communist Manifesto, Karl Marx’s ideas, words, and writings would go on to influence generations. “Go on – get out. 3. Up to his dying moment, Che Guevara proved his legacy as being worthy of gracing so many t-shirts. “I know you’ve come to kill me. 4. Tom Ketchum was a hole-in-the-wall gang member and notorious train robber. “I’ll be in hell before you start breakfast – let her rip!” 5. Television reporter Christine Chubbuck was frustrated with her job. 6. “I wish I’d drunk more champagne.” 7. “Hurrah for anarchy! 8. “More weight!” 9. 10.

The Dyson Technology Experience and the Dyson Air... It has been a strange spring and summer around here in the Midwest. First it seemed like winter was just never going to end and the days of jackets and hats dragged on forever. Then, in the span of what felt like two days, we are now stuck with 90°+ temperatures that make you feel as though you are going to melt into a puddle on the sidewalk the moment you step outside. So, other than hide out inside in the air conditioning, how are we keeping cool? With none other than the most innovative fan around: the Dyson Air Multiplier. Before having the opportunity to try out the Dyson Air Multiplier in our home, we were able to get a sneak peek in the form of the Dyson Technology Experience, a tour that Dyson is taking around the country to cool off the United States. This touring exhibit allows people to get hands-on with Dyson machines and really see how amazing these bladeless fans are - both in terms of safety as well as ease of cleaning. The answer? Okay, yuck.

I forgot to send in my U.S. Census form. Am I in trouble I'm afraid if you fail to file your Census form, you will not be counted amongst the general public. Since you're not counted, you don't exist. FEMA Exterminators are usually sent within 30 days of lack of filing of the Census forms and unless you're ready for Guantanamo listen carefully. This will take courage and initiative so be ready. 30 days is the minimum wait period but since Obama's been in office FEMA's been busy...they won't publicly say what but whatever the case may be, that'll probably delay your FEMA Directive 84F Title 2 file from being filed for at least 60 days. Go to the nearest Post Office (avoid looking at cameras) and purchase the slowest possible A4 size envelope available. Get hold of a Census form and fill it out completely. Now you need to get mobile. Get a cab or take a bus to the nearest Internet Cafe. Now use the Spanish-English dictionary to translate and transcribe words, this time with the pen, onto the Census. Take the keys and enter the facility. Eat.

80 Healthy Recipe Substitutions Here at Greatist, we're always looking for ways to make our favorite foods healthier without sacrificing flavor. So we compiled a list of our best substitutions and discovered some new ones along the way. Below are our 83 (!) top picks, guaranteed to make that next meal a delicious, healthier hit. Baking hacks 1. Swapping out flour for a can of black beans (drained and rinsed, of course) in brownies is a great way to cut out the gluten and fit in an extra dose of protein, Plus, they taste great. 2. In virtually any baked good, replacing white flour with whole wheat can add a whole new dimension of nutrients, flavor, and texture. 3. Using applesauce in place of sugar can give the necessary sweetness without the extra calories and, well, sugar. 4. Don’t knock this one till you’ve tried it. 5. This gluten-free switch gives any baked good a dose of protein, omega-3s, and a delicious nutty flavor. 6. 7. 8. 9. 10. 11. The creamy, thickening-power of mashed (ripe!) 12. 13. 14. 15. 16. 17. 18.