Google's Eric Schmidt has these 9 rules for emailing 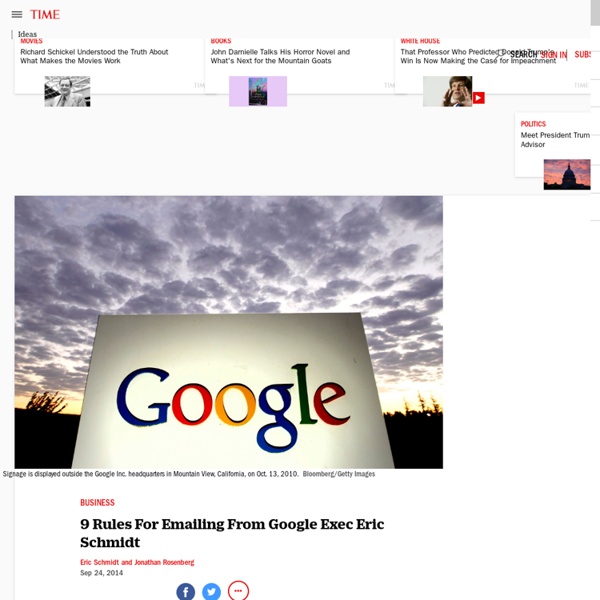 Communication in the Internet Century usually means using email, and email, despite being remarkably useful and powerful, often inspires momentous dread in otherwise optimistic, happy humans. Here are our personal rules for mitigating that sense of foreboding: Cover of 'How Google Works,' by Eric Schmidt and Jonathan Rosenberg How Google Works 1. Respond quickly. There are people who can be relied upon to respond promptly to emails, and those who can’t. 2. 3. When you open a new message, you have a few options: Read enough of it to realize that you don’t need to read it, read it and act right away, read it and act later, or read it later (worth reading but not urgent and too long to read at the moment). If you do this well, then your inbox becomes a to‑do list of only the complex issues, things that require deeper thought (label these emails “take action,” or in Gmail mark them as starred), with a few “to read” items that you can take care of later. 4. 5. 6. 7. 8. 9.

There is No Such Thing as a Great Team, Only Great Habits Sometimes, an investor gets lucky. They invest in a company with an idea that doesn't go anywhere, the company pivots, and you wind up in the next big thing. In hindsight, an investor will tell you that they knew they had backed a great team and that was the key to the investment. It's never luck. I have a lot of trouble with the "great team" scenario, because it just doesn't seem to play out in real life. Is greatness innate? Why don't all the people who have "great" entrepreneurial qualities succeed? It feels like a lot of hocus pocus half the time--where we mistake agressiveness and ambition for qualities of good management in startups. Adam D'Augelli, a very smart investor over at True Ventures, mentioned to me the other day something that rang true--that the best entrepreneurs update their investors with metrics, not stories. The best entrepreneurs I've worked with have great habits and they create great habits in their companies. It's the same with culture.

The product philosophy of Artips Artips co-founders Coline and Jean met at a startup weekend in Paris in fall 2012. They spent 54 hours designing and actually launching their product: a “daily dose of art”, as they pitch it, as it consists of three emails a week with witty anecdotes about arts. Here’s an example featuring Michelangelo’s Last Judgement (sorry non-French readers). Artips’ emails are not delivering exclusive news nor offering discounts or tips. “We give readers a breath of fresh air. “We also break down social barriers. I can’t help comparing Artips to Genius. The comparison also brings the question of the destination website.

designers + engineers + empathy = greatness | uncapitalized designers and engineers need a deeper understanding of each other’s craft to create truly great products. i’m convinced that engineers need to understand the experiences designers aim to create, even as designers need to understand just know how engineers will make those experience come to life. when the two groups interact for the greater good: they build phenomenal products, with minimal time resources. it’s all a matter of empathy — loosely defined as understanding the feelings and thinking of others. during my time leading engineering and design on webOS, and later at Twitter, i’ve learned that empathy is core to a product team’s ability to move quickly from designers’ “what” to engineers’ “how.” said differently, a designer knows what to make, and an engineer knows how to make it. when they overcome the communication barrier that separates the what and the how, good things are certain to come. Like this: Like Loading...

Hackers and Painters May 2003 (This essay is derived from a guest lecture at Harvard, which incorporated an earlier talk at Northeastern.) When I finished grad school in computer science I went to art school to study painting. A lot of people seemed surprised that someone interested in computers would also be interested in painting. Both of these images are wrong. What hackers and painters have in common is that they're both makers. I've never liked the term "computer science." Sometimes what the hackers do is called "software engineering," but this term is just as misleading. What and how should not be kept too separate. Perhaps one day "computer science" will, like Yugoslavia, get broken up into its component parts. Bundling all these different types of work together in one department may be convenient administratively, but it's confusing intellectually. The mathematicians don't seem bothered by this. In the best case, the papers are just a formality. The only external test is time. Writers do this too.