Out in the Open: The Site That Teaches You to Code Well Enough to Get a Job 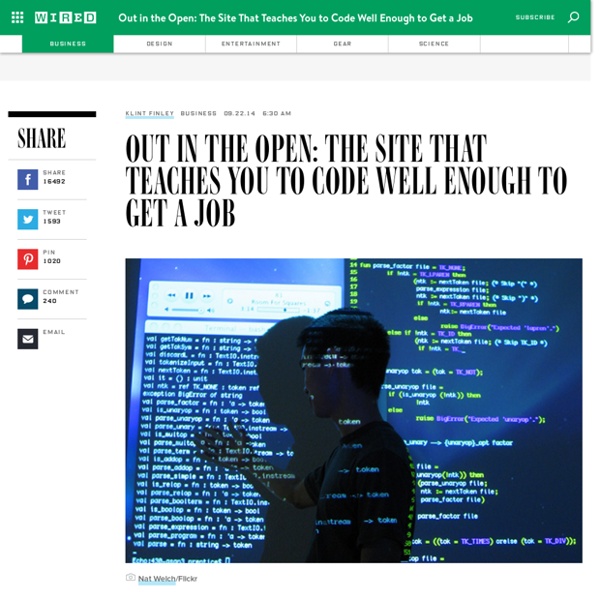 Wanna be a programmer? That shouldn’t be too hard. You can sign-up for an iterative online tutorial at a site like Codecademy or Treehouse. But if want to be a serious programmer, that’s another matter. That’s where a site called Exercism.io is trying to help. It’s a simple idea. Click to Open Overlay Gallery Software developer Katrina Owen created Exercism.io while she was teaching programming at Jumpstart Labs in Denver, Colorado. To solve the problem, she created a site last year that presents the practice problems and prevents students from being able to move on to the next ones without submitting a solution to the previous problem. But it didn’t stop there. Owen, who now works for the Santa Monica, California-based music collaboration startup called Splice says she has no plans to turn the site into a business. Go Back to Top. Related:  Of interest • Py • programing

What is MAT? | Muscle Activation Techniques MAT™ is a technique that helps athletes recover from competitive stress quickly and help them prevent future injuries. MAT™ prepares the body to be more efficient in training and athletic performance. In order to reach optimal performance capabilities, an athlete is forced to train at high intensity levels. Because of this, there is always the risk for injury. Some athletes may be predisposed to an injury, due to muscular contraction inefficiencies that place increased stress on joints and tissues. When training at a high level, the inefficiencies are magnified, and sometimes the body can no longer handle the stress, eventually breaking down. The goal of MAT™ is to address the weakness before an injury occurs. MAT™ not only helps to prevent injuries, but it can also assist a rehabilitation process. “The benefit of MAT™ is that the changes can be immediate” says Greg Roskopf, the founder and developer of MAT.

Lamassu — Bitcoin ATM Machine exercism.io Open CV library | Technological creativity Installing the OpenCV library from You’ll start by importing the OpenCV library into your sketch. This makes all the functionality of the library available for you to use in your sketch. import hypermedia.video. In the setup() function, you need to create an instance of the OpenCV class, using the OpenCV constructor. opencv = new OpenCV( this );opencv.capture( width, height ); Inside the draw() function, we’ll start by using the read() method. opencv.read();opencv.flip( OpenCV.FLIP_HORIZONTAL );image( opencv.image(), 0, 0 ) A New Acoustic Instrument That Creates Sounds like a Digital Synthesizer The Yabahar is a new acoustic instrument designed by Istanbul-based musician Görkem Şen that emits music right out of a retro sci-fi movie, a remarkable feat considering there isn’t a bit of electricity involved. The Yabahar can be played in a variety of different ways using mallets or with a bow, relying on a combination of two drum-like membranes, long springs, and a tall fretted neck to create music. Like any instrument, it’s capable of producing sounds that run the gamut from “beautiful music” to “noise.” Give it a listen! (via The Creators Project) Update: Here’s a video (in Turkish) of Şen giving a TEDx talk earlier this year where he plays a similar bow and spring-type instrument.

Resume writing - Australian Style - find career advice, review employment news and search for jobs at careerone.com.au By Kate Southam, Editor of careerone.com.au. The thought of writing a resume fills many people with dread. However, all you need is a plan that covers both lay out and content. The plan below should help you produce a resume that is easy to read and packed with facts employers want to know. Contact details Centre contact details at the top of the page. Birth date and marital status You are not legally obliged to include either detail. Lay out Again, this is really open to debate but the best advice I've heard is “keep it simple”. Bold for headings is easier to read than bold and underline (overkill). Summarising your strengths upfront You can do this two ways. Key Strengths Based on my conversations with recruitment consultants, a Key Strengths area represented with dot points is the popular option. For example: High level computer skills including Excel, Word and Powerpoint. And you fill in the rest. Career Profile, Career Overview, Career Summary, Career Objective? Career Overview Achievements

wavelets/awesome-python SpaceX Warns Fake Competitors Could Disrupt its Space Internet Plan ​The biggest impediment to SpaceX's plan to create a worldwide, satellite broadband network might not be the sheer technological difficulty of putting 4,000 satellites into space. Instead, outdated international and domestic regulations on satellite communications could stand in the way, according to a ​new Federal Communications Commission filing by the company. In January, SpaceX founder Elon Musk said the company plans to ​launch an array of internet-providing satellites that will orbit roughly 750 miles above the Earth, giving the company something to do with those reusable rockets it's been developing. But, in order to launch and operate any satellite, manufacturers have to reserve communications spectrum with either the FCC or another country's communications body, which then must deal with the International Telecommunication Union. The spectrum-reserving process is also extremely important, from both a business and practical standpoint. Smallsat operator: Seen FCC fee schedule?