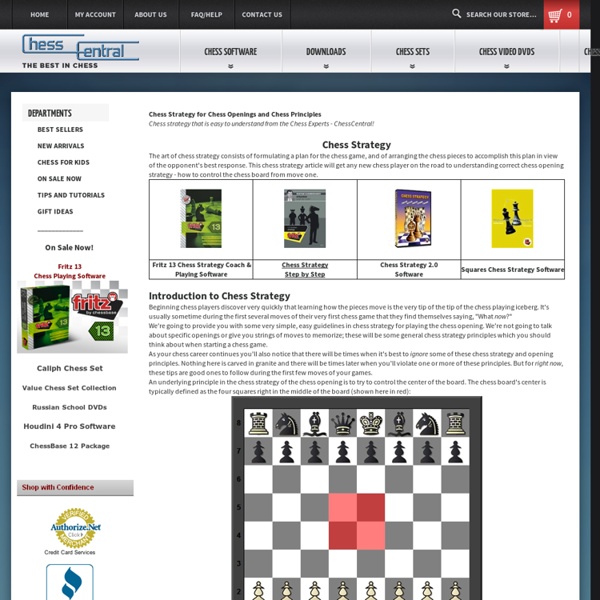 The art of chess strategy consists of formulating a plan for the chess game, and of arranging the chess pieces to accomplish this plan in view of the opponent's best response. This chess strategy article will get any new chess player on the road to understanding correct chess opening strategy - how to control the chess board from move one. Introduction to Chess Strategy Beginning chess players discover very quickly that learning how the pieces move is the very tip of the tip of the chess playing iceberg. It's usually sometime during the first several moves of their very first chess game that they find themselves saying, "What now?" We're going to provide you with some very simple, easy guidelines in chess strategy for playing the chess opening. As your chess career continues you'll also notice that there will be times when it's best to ignore some of these chess strategy and opening principles. The centrally-placed Knight can move to (and control) eight squares. Here's a simple example.

The Immortal Game: Synopsis A surprising, charming, and ever-fascinating history of the seemingly simple game that has had a profound effect on societies the world over. Why has one game, alone among the thousands of games invented and played throughout human history, not only survived but thrived within every culture it has touched? What is it about its thirty-two figurative pieces, moving about its sixty-four black and white squares according to very simple rules, that has captivated people for nearly 1,500 years? Why has it driven some of its greatest players into paranoia and madness, and yet is hailed as a remarkably powerful intellectual tool? Nearly everyone has played chess at some point in their lives. In his wide-ranging and ever-fascinating examination of chess, David Shenk gleefully unearths the hidden history of a game that seems so simple yet contains infinity.

Beginning Chess Lessons: Part 1 : What is Passing in a Chess Game SILMAN CHESS March 2014 If you’re a 1.d4 player, then this book might well be for you A new edition of Dvoretsky’s magnificent work This book, the first of 3, covers the super complex Winawer Variation (sans 7.Qg4) Lakdawala teaches you to play 1.b3, which has been successfully used by Fischer, Larsen, and Nimzowitsch A fine handbook of key positional methods A deep analysis and discussion of Carlsen’s World Championship victory over Anand, in a beautiful hardcover edition. January 2014 Jeremy Silman’s first novel! The first proper translation in English (for iPad, iPhone, and iPod Touch). A simple but effective system for those that want effective but easy-to-learn openings Another instructional masterpiece by Cyrus Lakdawala How Magnus broke Kasparov’s rating record Another magnificent book by grandmaster Ivan Sokolov Aagaard and Ntirlis team up to give you a complete, dynamic answer to 1.e4 November/December 2013 A K-8 educational math learning aid series that teaches you to play chess at the same time! July

Chess History Center - Chess Notes Three Chess Tips that Will Change Your Game for Good! After reading these tips and strategies you will increase your chess win rate and ranking easily. Just by following these simple tips your chess game will be a lot more solid. So without further ado, here we go. 1. Control the center: It is vital that you take control of the center of the board at the beginning of each game you play. 2. Pawn structure is very key to winning in chess. 3. Yes, I know it is common sense. Now if use all three of these simple tips in your game all at the same time, you will notice that most players under 1400 lack these simple tips.

Learn to Play Chess Chess Corner Home Learn Play Games Fun World Champions Ecards Book Store Links Learn to Play Chess Want to play chess? Don't know how? Don't worry. Once you know the fundementals, you will need to practise your skills. Why Chess? Elementary Intermediate Copyright © 1997 - 2017 Chess Corner. Ten Chess Tips Ten Top Tips (updated Jan 2011) by National Master Dan Heisman (610-649-0750)Main Chess Page - Articles Page - Dan's More Top Tips Page! - Lessons - Award-Winning Columns on How to Improve 1.The most important chess guideline: SAFETY: Keep all your pieces safe! (And consider taking opponent’s pieces that are not safe). For piece values, Bishops and Knights as worth about 3¼ pawns, Rooks 5, a Queen about 9.5.Having two Bishops when your opponent does not is called “the Bishop Pair” and is worth about an extra ½ pawn. Winning a Rook for a Bishop or Knight is called winning The Exchange and is worth almost half a piece (Bishop or Knight). 2.The 2nd most important chess guideline: ACTIVITY: Make sure all your pieces are doing something all the time! 3.TAKE YOUR TIME – if world championship players always take several minutes to find a good move, what makes you think that you can find a better one faster? 7.When you are winning, think defense first!! ·Get ALL your pieces into play every game

Chess Training GM Igor Smirnov: chess teacher, chess coach, chess trainer chess variants explained SchemingMind.com does not only support traditional 'Standard' Chess; several chess variants which use the same board and pieces can also be played. Some of these are very similar to Standard Chess (for example with different starting positions), some are different games in their own right, but all are great fun to play! If you want to learn more about chess variants, we can highly recommend two great books (clicking the links will take you to the Amazon pages where you can purchase the books). Another great resource for information about chess variants is the ChessVariants.org web site. Listed below are the chess variants that you can play on SchemingMind.com - many of these are described in more detail by the resources listed above. Chess960 Many chess masters valued the challenge of playing chess with a non-standard setup as a way to break out of the opening play doldrums. More information on Fischer Random Chess is available on ChessVariants.org Alice Chess 1 Alice Chess 2 All Queens Rules