Ray Bradbury on Writing, Emotion vs. Intelligence, and the Core of Creativity 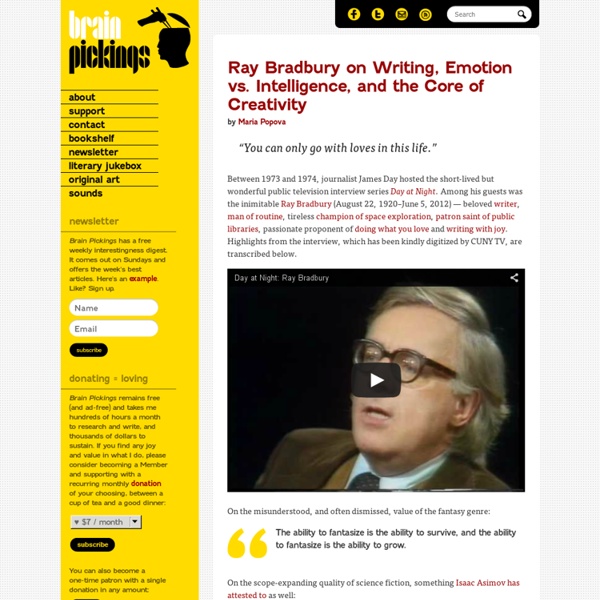 by Maria Popova “You can only go with loves in this life.” Between 1973 and 1974, journalist James Day hosted the short-lived but wonderful public television interview series Day at Night. Among his guests was the inimitable Ray Bradbury (August 22, 1920–June 5, 2012) — beloved writer, man of routine, tireless champion of space exploration, patron saint of public libraries, passionate proponent of doing what you love and writing with joy. Highlights from the interview, which has been kindly digitized by CUNY TV, are transcribed below. On the misunderstood, and often dismissed, value of the fantasy genre: The ability to fantasize is the ability to survive, and the ability to fantasize is the ability to grow. On the scope-expanding quality of science fiction, something Isaac Asimov has attested to as well: The great thing about growing up with science fiction is that you have an interest in everything. On the formative influence of fairy tales and Greek myths A resounding secular “Amen!”

Related:  Creativity • worth waching 3 • Advice from the Experts • Articoli

Networked Knowledge and Combinatorial Creativity by Maria Popova Why creativity is like LEGO, or what Richard Dawkins has to do with Susan Sontag and Gandhi. In May, I had the pleasure of speaking at the wonderful Creative Mornings free lecture series masterminded by my studiomate Tina of Swiss Miss fame. I spoke about Networked Knowledge and Combinatorial Creativity, something at the heart of Brain Pickings and of increasing importance as we face our present information reality. The talk is now available online — full (approximate) transcript below, enhanced with images and links to all materials referenced in the talk.

Being vs. becoming, Wendell Berry on solitude and our creative demons, the best biographies, memoirs, and history books of the year, and more Hey Peggy Fleming! If you missed last week's edition – the best art, design, and photography books of the year, how Rilke can help us befriend our mortality and live more fully, a tender wordless story about how we ennoble each other in friendship, and more – you can catch up right here. And if you're enjoying this, please consider supporting with a modest donation – every little bit helps, and comes hugely appreciated. Pixar Cofounder Ed Catmull on Failure and Why Fostering a Fearless Culture Is the Key to Groundbreaking Creative Work by Maria Popova Why the greatest enemy of creative success is the attempt to fortify against failure. “Make New Mistakes. Make glorious, amazing mistakes. Make mistakes nobody’s ever made before,” Neil Gaiman urged in his commencement-address-turned-manifesto-for-the-creative life. “The chief trick to making good mistakes is not to hide them — especially not from yourself,” philosopher Daniel Dennett asserted in his magnificent meditation on the dignity and art-science of making mistakes.

The Art of Looking: What 11 Experts Teach Us about Seeing Our Familiar City Block with New Eyes by Maria Popova “Attention is an intentional, unapologetic discriminator. It asks what is relevant right now, and gears us up to notice only that.” “How we spend our days,” Annie Dillard wrote in her timelessly beautiful meditation on presence over productivity, “is, of course, how we spend our lives.” And nowhere do we fail at the art of presence most miserably and most tragically than in urban life — in the city, high on the cult of productivity, where we float past each other, past the buildings and trees and the little boy in the purple pants, past life itself, cut off from the breathing of the world by iPhone earbuds and solipsism. Horowitz begins by pointing our attention to the incompleteness of our experience of what we conveniently call “reality”:

Kierkegaard on Anxiety & Creativity by Maria Popova “Because it is possible to create — creating one’s self, willing to be one’s self… — one has anxiety. One would have no anxiety if there were no possibility whatever.” “Anxiety is love’s greatest killer,” Anaïs Nin famously wrote. But what, exactly, is anxiety, that pervasive affliction the nature of which remains as drowning yet as elusive as the substance of a shadow? Debunking the Myth of the 10,000-Hours Rule: What It Actually Takes to Reach Genius-Level Excellence by Maria Popova How top-down attention, feedback loops, and daydreaming play into the science of success. The question of what it takes to excel — to reach genius-level acumen at a chosen endeavor — has occupied psychologists for decades and philosophers for centuries. Groundbreaking research has pointed to “grit” as a better predictor of success than IQ, while psychologists have admonished against the dangers of slipping into autopilot in the quest for skill improvement. In recent years, one of the most persistent pop-psychology claims has been the myth of the “10,000-hour rule” — the idea that this is the amount of time one must invest in practice in order to reach meaningful success in any field. But in Focus: The Hidden Driver of Excellence (public library), celebrated psychologist and journalist Daniel Goleman, best-known for his influential 1995 book Emotional Intelligence, debunks the 10,000-hour mythology to reveal the more complex truth beneath the popular rule of thumb:

How Mind-Wandering and “Positive Constructive Daydreaming” Enhance Creativity and Improve Our Social Skills by Maria Popova The science of why fantasy and imaginative escapism are essential elements of a satisfying mental life. Freud asserted that daydreaming is essential to creative writing — something a number of famous creators and theorists intuited in asserting that unconscious processing is essential to how creativity works, from T. S. Eliot’s notion of “idea incubation” to Alexander Graham Bell’s “unconscious cerebration” to Lewis Carroll’s “mental mastication.” In the 1950s, Yale psychologist Jerome L. An Antidote to the Age of Anxiety: Alan Watts on Happiness and How to Live with Presence by Maria Popova Wisdom on overcoming the greatest human frustration from the pioneer of Eastern philosophy in the West. “How we spend our days is, of course, how we spend our lives,” Annie Dillard wrote in her timeless reflection on presence over productivity — a timely antidote to the central anxiety of our productivity-obsessed age. Indeed, my own New Year’s resolution has been to stop measuring my days by degree of productivity and start experiencing them by degree of presence. But what, exactly, makes that possible?

How to build a life of inspiration in four easy steps Posted January 28th, 2016 by Tanner Christensen “We are influenced by drives to which we have little access, and which we never would have believed had not the statistics laid them bare.” – David Eagleman No matter where you look, you’ll discover that a crucial part of living a creative life involves being inspired in some form or another. Either being inspired to act or being inspired by something. Despite its prevalence in the creative culture, inspiration is a peculiar subject to try and understand.

The Science (and Practice) of Creativity "Creativity isn't about music and art; it is an attitude to life, one that everybody needs," wrote the University of Winchester's Professor Guy Claxton in the lead-up to the 2014 World Innovation Summit for Education (WISE) dedicated to creativity and education. "It is a composite of habits of mind which include curiosity, skepticism, imagination, determination, craftsmanship, collaboration, and self-evaluation." Sounds like the perfect skill set for equipping young people to navigate an increasingly complex and unpredictable world. Encouragingly, there's plenty of evidence -- from both research and practice -- that most of the above can be taught in the classroom.

Mark McGuinness Mark Mark McGuinness I’m a poet, coach and creative entrepreneur, living in London, UK and coaching creatives worldwide via the magic of the internet. Why creativity? I’ve always loved creating. Yes, You Can Teach and Assess Creativity! A recent blog by Grant Wiggins affirmed what I have long believed about creativity: it is a 21st-century skill we can teach and assess. Creativity fosters deeper learning, builds confidence and creates a student ready for college and career. However, many teachers don't know how to implement the teaching and assessment of creativity in their classrooms. While we may have the tools to teach and assess content, creativity is another matter, especially if we want to be intentional about teaching it as a 21st-century skill. In a PBL project, some teachers focus on just one skill, while others focus on many. Here are some strategies educators can use tomorrow to get started teaching and assessing creativity -- just one more highly necessary skill in that 21st-century toolkit.

Ebo-Lie: Man Living In Ghana Confirms Ebola Is A Hoax! By Steven Bancarz| A statement made by a man in Ghana named Nana Kwame has rocked the internet in the last few days. The following information needs to reach people. We need to see Ebola for what it really is.