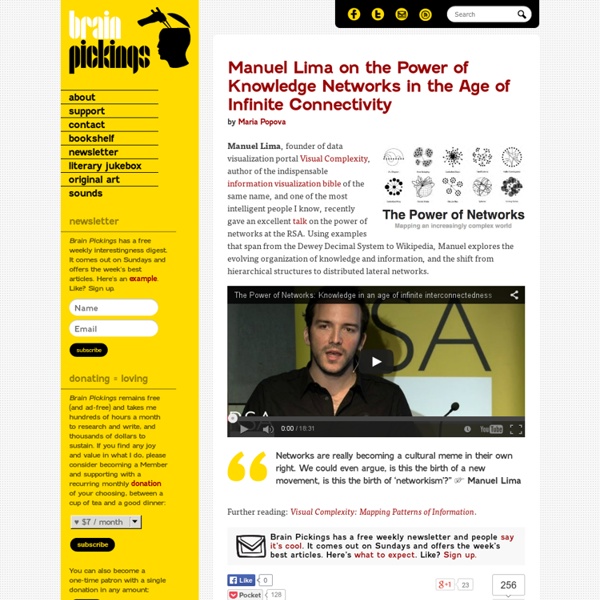 Fascinating New Visualization From Yahoo! A new tool from Yahoo! gives you a glimpse of what’s being read on its homepage, as well as what’s popular from the last 24 hours. It’s actually a gorgeous display that lets you see different breakdowns of who’s viewing what, when, and why. The visualization is a part of its C.O.R.E. project, which Yahoo! The Yahoo! On the backend, Yahoo! According to Yahoo! By changing the time-frame sliders, age demographics, and category of news, you can see what stories are being shown on the Yahoo! While there’s a lot of data to digest here, the visualization makes it pretty easy for any user to interact with it. ➤ Yahoo!

The Problem with the Data-Information-Knowledge-Wisdom Hierarchy - David Weinberger by David Weinberger | 9:00 AM February 2, 2010 The data-information-knowledge-wisdom hierarchy seemed like a really great idea when it was first proposed. But its rapid acceptance was in fact a sign of how worried we were about the real value of the information systems we had built at such great expense. What looks like a logical progression is actually a desperate cry for help. The DIKW hierarchy (as it came to be known) was brought to prominence by Russell Ackoff in his address accepting the presidency of the International Society for General Systems Research in 1989. But the actual first recorded instance of it was in 1934: Where is the Life we have lost in living? Those lines come from the poem “The Rock” by T.S. The DIKW sequence made immediate sense because it extends what every Computer Science 101 class learns: information is a refinement of mere data. But, the info-to-knowledge move is far more problematic than the data-to-info one. So, what is “knowledge” in the DIKW pyramid?

Open-source Weave liberates data for journalists, citizens Data nerds from government and academia gathered Friday at Northeastern University to show off the latest version of Weave, an open-source, web-based platform designed to visualize “any available data by anyone for any purpose.” The software has a lot of potential for journalists. Weave is supported by the Open Indicators Consortium, an unusual partnership of planning agencies and universities who wanted better tools to inform public policy and community decision-making. The groups organized and agreed to share data and code in 2008, well before Gov 2.0 was hot. Think of Weave as more programming language than app. Data is linked, which means you can view the same datapoint from many angles. The software reminds me of SPSS, from my college poli sci days. Georges Grinstein, a professor of computer science at UMass Lowell, develops Weave with a team of some 20 students.

Metacognition: The Gift That Keeps Giving Editor's note: This post is co-authored by Marcus Conyers who, with Donna Wilson, is co-developer of the M.S. and Ed.S. Brain-Based Teaching degree programs at Nova Southeastern University. They have written several books, including Five Big Ideas for Effective Teaching: Connecting Mind, Brain, and Education Research to Classroom Practice. Students who succeed academically often rely on being able to think effectively and independently in order to take charge of their learning. These students have mastered fundamental but crucial skills such as keeping their workspace organized, completing tasks on schedule, making a plan for learning, monitoring their learning path, and recognizing when it might be useful to change course. They do not need to rely on their teacher as much as others who depend on more guidance to initiate learning tasks and monitor their progress. Metacognition in the Brain How to Teach Students to Be More Metacognitive Reference Stephen M. For Further Reading

Tool detects patterns hidden in vast data sets Researchers from the Broad Institute and Harvard University have developed a tool that can tackle large data sets in a way that no other software program can. Part of a suite of statistical tools called MINE, it can tease out multiple patterns hidden in health information from around the globe, statistics amassed from a season of major league baseball, data on the changing bacterial landscape of the gut, and much more. The researchers report their findings in a paper appearing in the December 16 issue of the journal Science. From Facebook to physics to the global economy, the world is filled with data sets that could take a person hundreds of years to analyze by eye. “There are massive data sets that we want to explore, and within them, there may be many relationships that we want to understand,” said Broad Institute associate member Pardis Sabeti, senior author of the paper and an assistant professor at the Center for Systems Biology at Harvard University.

Shapes for Sounds: A Visual History of the Alphabet by Maria Popova What the anatomy of your tongue has to do with ship flags and the evolution of human communication. I’m endlessly fascinated by the intersection of sight and sound and have a well-documented alphabet book fetish. So I absolutely love Shapes for sounds by Timothy Donaldson, exploring one of the most fundamental creations of human communication, the alphabet, through a fascinating journey into “why alphabets look like they do, what has happened to them since printing was invented, why they won’t ever change, and how it might have been.” While the tome is full of beautiful, lavish illustrations and typography — like 26 gorgeous illustrated charts that trace the evolution of spoken languages into written alphabets — it’s no mere eye candy. Donaldson, a typographer, graphic designer and teacher, digs deep into the cultural anthropology of how letters were crystallized from sounds, scripts invented, words formed, and linguistic conventions indoctrinated. Donating = Loving

Data, Information, Knowledge and Wisdom From SystemsWiki by Gene Bellinger, Durval Castro, Anthony Mills There is probably no segment of activity in the world attracting as much attention at present as that of knowledge management. Yet as I entered this arena of activity I quickly found there didn't seem to be a wealth of sources that seemed to make sense in terms of defining what knowledge actually was, and how was it differentiated from data, information, and wisdom. What follows is the current level of understanding I have been able to piece together regarding data, information, knowledge, and wisdom. I figured to understand one of them I had to understand all of them. According to Russell Ackoff [1989], a systems theorist and professor of organizational change, the content of the human mind can be classified into five categories: Ackoff indicates that the first four categories relate to the past; they deal with what has been or what is known. A further elaboration of Ackoff's definitions follows: Data... data is raw. Addendum

Applying Sentiment Analysis to the Bible « OpenBible.info Blog This visualization explores the ups and downs of the Bible narrative, using sentiment analysis to quantify when positive and negative events are happening: Full size download (.png, 4000×4000 pixels). Things start off well with creation, turn negative with Job and the patriarchs, improve again with Moses, dip with the period of the judges, recover with David, and have a mixed record (especially negative when Samaria is around) during the monarchy. The exilic period isn’t as negative as you might expect, nor the return period as positive. In the New Testament, things start off fine with Jesus, then quickly turn negative as opposition to his message grows. The story of the early church, especially in the epistles, is largely positive. Methodology Sentiment analysis involves algorithmically determining if a piece of text is positive (“I like cheese”) or negative (“I hate cheese”). The visualization takes a moving average of the data to provide a coherent story; the raw data is more jittery.

Magic and Mystery, Chaos and Complexity Paradox My dictionary says a paradox is a seemingly absurd or contradictory statement even if it is well founded. In life there are many things that appear absurd and contradictory that are in fact real and true. These paradoxes mean we live in a world of mystery where there is always something new to learn and experience. Every question answered opens up a new question to be solved. Tonight I will talk about some of those paradoxes and how they might help us understand the world we live in. The first paradox is that we have two competing needs in life beyond our needs for mere survival. The second need we have is to be accepted by other people. So, one dancing partner is our need to belong; to feel accepted and connected. There is no unity without sacrifice. The other dancing partner is our need to be a unique individual. Just as dancers need to be balanced with one another. The extremes of only co-operating or only competing do not work. There is no diversity without inequality.