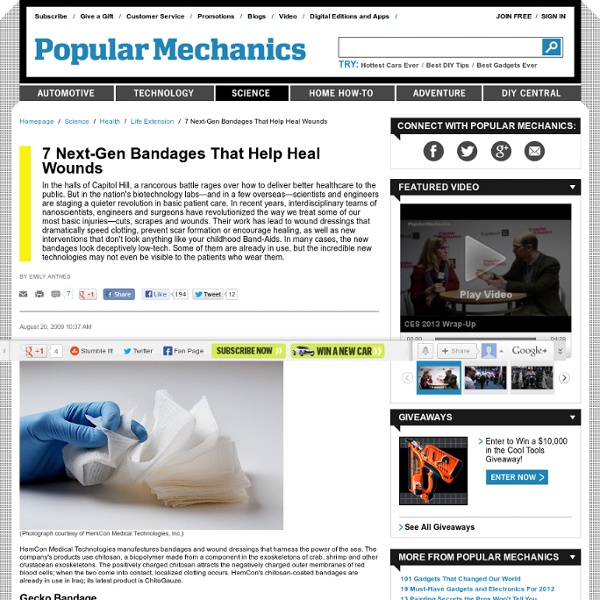 ChitoGauze (Photograph courtesy of HemCon Medical Technologies, Inc.) HemCon Medical Technologies manufactures bandages and wound dressings that harness the power of the sea. The company's products use chitosan, a biopolymer made from a component in the exoskeletons of crab, shrimp and other crustacean exoskeletons. The positively charged chitosan attracts the negatively charged outer membranes of red blood cells; when the two come into contact, localized clotting occurs. HemCon's chitosan-coated bandages are already in use in Iraq; its latest product is ChitoGauze. Gecko Bandage (Photograph by Bob Langer and Jeff Karp, MIT) The ability of geckos to scale vertical surfaces comes from the special topography of their feet: nano-size hairs gives their feet an adhesive property. QuikClot (Photograph courtesy of Z-Medica Corporation) The family of QuikClot products make use of kaolin clay, a natural blood-clotter. Ultrasound Device (Photograph courtesy of George K. Scaffold Bandage Electric Bandage

Can humans regrow fingers?" When a hobby-store owner in Cincinnati sliced off his fingertip in 2005 while showing a customer why the motor on his model plane was dangerous, he went to the emergency room without the missing tip. He couldn't find it anywhere. The doctor bandaged the wound and recommended a skin graft to cover the top of his right-middle stub for cosmetic purposes, since nothing could be done to rebuild the finger. Months later, he had regrown it, tissue, nerves, skin, fingernail and all. This particular hobbyist happened to have a brother in the tissue-regeneration business, who told him to forego the skin graft and instead apply a powdered extract taken from pig's bladder to the raw finger tip. The extract, called extracellular matrix, lays the framework that cells use to generate any given body part.

Blood substitute A blood substitute (also called artificial blood or blood surrogates) is a substance used to mimic and fulfill some functions of biological blood. It aims to provide an alternative to blood transfusion, which is transferring blood or blood-based products from one person into another. Thus far, there are no well-accepted oxygen-carrying blood substitutes, which is the typical objective of a blood (RBC) transfusion; however, there are widely available non-blood volume expanders for cases where only volume restoration is required. These are helping doctors and surgeons avoid the risks of disease transmission and immune suppression, address the chronic blood donor shortage, and address the concerns of Jehovah's Witnesses and others who have religious objections to receiving transfused blood. Oxygen-carrying substitutes[edit]

Two stroke The two stroke engine employs both the crankcase and the cylinder to achieve all the elements of the Otto cycle in only two strokes of the piston. Intake The fuel/air mixture is first drawn into the crankcase by the vacuum that is created during the upward stroke of the piston. The illustrated engine features a poppet intake valve; however, many engines use a rotary value incorporated into the crankshaft. 12 bizarre real-life places that are stranger than science fiction Science fiction is home to some fantastic societies, from Cloud City to Bartertown. But you doesn't have to leave reality for this—our own world has places so abnormal, they make alien societies seem ordinary. Here are 12 remarkable locations in which people once lived (and some still do). 1. Izu Islands Off the coast of Japan lies a series of volcanic islands.

Organ Regrowth: Get a New Pair of Eyes - PCWorld First scientists said, "I wonder if we can print body parts." Then they said, "I wonder if we can grow new blood vessels." Well, that time where scientists say "I wonder if we can do this" has come again: Scientists have, for the first time ever, grown a rudimentary eye in a petri dish. A Japanese team of biomechanical and biochemistry scientists have taken the first step toward building a complete eye, and this same process may some day be used to build a stockpile of "grow sheets" of cells that could be used in transplants. Instead of going blind, getting expensive surgery that may need to be repeated down the road, or getting these expensive adjustable glasses, you'll someday be able to go to the optometrist and get your old eyes swapped for a new pair! Using a culture of embryonic stem cell aggregates, an embryonic-stem-cell-derived retinal epithelium (a layer of tissue) spontaneously formed into a embryonic optic cup (yep, it's complicated).

Nanoengineers invent new biomaterial that more closely mimics human tissue Thursday, May 26, 2011 A new biomaterial designed for repairing damaged human tissue doesn’t wrinkle up when it is stretched. The invention from nanoengineers at the University of California, San Diego marks a significant breakthrough in tissue engineering because it more closely mimics the properties of native human tissue. Pictured: Optical images of polyethylene glycol scaffolds expanding in response to stretching.(Note: green tone added to image.) Smart bandages use tiny electrodes to monitor bacterial growth in flesh wounds Bandages aren’t new or particularly interesting, right? They keep wounds clean and protected from the outside environment. Some bandages are even impregnated with antibacterial agents to kill off rogue pathogens. What if bandages could be used to monitor wounds and detect problems, though? That is the goal of Thaddaeus Webster and Edgar Goluch. In a recently published research paper, they explain how they use minuscule electrodes made of palladium to detect potentially deadly bacteria.

Kitchen of the Future Kitchen of the Future Energy-saving light bulbs will only take us so far. We need to push ourselves to rethink domestic appliances entirely, to rethink how homes consume energy, and how entire communities can pool resources” says Clive van Heerden, Senior Director of Design-led Innovation at Philips Design. Philips believes the solution is likely to come from biological processes, which are less energy-consuming and non-polluting. We need to go back to nature in order to move forward. The Microbial Home is a proposal for an integrated cyclical ecosystem where each function’s output is another’s input.

snsanalytics Public release date: 19-Apr-2011 [ Print | E-mail Share ] [ Close Window ] Contact: David Orensteindavid_orenstein@brown.edu 401-863-1862Brown University PROVIDENCE, R.I. [Brown University] — Researchers at Brown University have found that specific genetic variations can predict how persistently people will believe advice they are given, even when it is contradicted by experience. The story they tell in a paper in the April 20 issue of the Journal of Neuroscience is one of the byplay between two brain regions that have different takes on how incoming information should influence thinking. How Maggots Heal Wounds Yes, maggots are creepy, crawly, and slimy. But that slime is a remarkable healing balm, used by battlefield surgeons for centuries to close wounds. Now, researchers say they've figured out how the fly larvae work their magic: They suppress our immune system. Maggots are efficient consumers of dead tissue. They munch on rotting flesh, leaving healthy tissue practically unscathed. Physicians in Napoleon's army used the larvae to clean wounds.

Graphene-Based Conductive Material Could Revolutionize Wearable Technology Share on Tumblr Email Photo by Shutterstock Hold on to your shorts, boys and girls, because the electronics industry is headed for a revolution. The University of Exeter has developed a material that researchers are hailing the world’s lightest and most flexible electrical conductor.

The 101 Most Useful Websites on the Internet Here are some of the most useful websites on the internet that you may not know about. These web sites, well most of them, solve at least one problem really well and they all have simple web addresses (URLs) that you can memorize thus saving you a trip to Google. And if you find this list useful, also check out the expanded version – The Most Useful Websites – which now offers a collection of 150+ undiscovered and incredibly useful websites to enhance your productivity. ctrlq.org/screenshots – for capturing screenshots of web pages on mobile and desktops. dictation.io – online voice recognition in the browser itself.