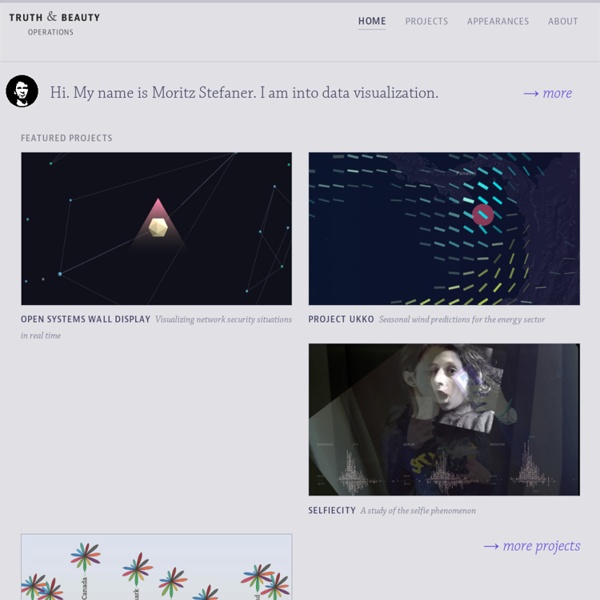 Mapline Blog How to Make an Awesome Data Visualization with Pin Map What is a Pin Map? 1 location = 1 pin Got the idea? Therefore, a pin map contains pins that each represent a geographical location. Beliv06 - 23 May 2006 - Home Page News [Jul'07] BELIV'08, a new edition of the workshop, will be hosted at ACM CHI 2008 in Florence, Italy on 5 Apr 2008. Deadline for submission is 30 Oct 2007. Links to Infographic Sites, Visual Designers and C - Cool Infographics Randy's infographic design consultancy to Visualize Business Intelligence Jacob O'Neal's site focused on designing animated GIF infographics Company that helps visualize business data Rose Zgodzinski's site to help client find visual solutions Consulting, Design and Social + PR Brian Cragin is an infographic designer in San Diego A masterfully constructed infographic campaign can work wonders for your business Dashboard Design: Data Driven helps your clients better understand and act upon your information Dejure Design provides interactive and visual design services to social justice organizations seeking to make their legal work more accessible and engaging. One of the UK’s leading providers of infographics and data visualisation for bloggers and businesses of all sizes An interactive design industry We make important data beautiful and easy to understand We specialize in transmitting messages in a clear, simple and attractive way.

Dieter Rams / Selector for 25/25 - Celebrating 25 Years of Design Dieter Rams Industrial Designer (1932-) Selector for 25/25 - Celebrating 25 Years of Design 29 March - 22 June 2007 As head of design at Braun, the German consumer electronics manufacturer, DIETER RAMS (1932-) emerged as one of the most influential industrial designers of the late 20th century by defining an elegant, legible, yet rigorous visual language for its products. Good design is innovative. Good design makes a product useful.

The Geotagger's World Atlas Every city has something unique about it, whether it’s a memorial statue, a cool coffee shop, a world-renowned museum or a local pizza parlor. These places are visited by hundreds or maybe even thousands of people a year, which translates to dozens of photos, many of which are geotagged to show the location of these popular and special places. So, what would happen if you took all of those photos and created a map, linking the photos to show individual journeys and locations? Well, you would end up a neat sketch-like image of the location, filled with individual travels and popular locations. You’d get the Geotagger’s World Atlas.

Remixing Rosling The Church of London commissioned me to remix two of the famous Gapminder bubble graphics to illustrate an interview with Hans Rosling for Google's "Think Quarterly" Magazine. Fertility and life expectancy This graphics is a condensed, and static version of one of Gapminder's famous animated "worm" graphics. The 36 best tools for data visualization It's often said that data is the new world currency, and the web is the exchange bureau through which it's traded. As consumers, we're positively swimming in data; it's everywhere from labels on food packaging design to World Health Organisation reports. As a result, for the designer it's becoming increasingly difficult to present data in a way that stands out from the mass of competing data streams. One of the best ways to get your message across is to use a visualization to quickly draw attention to the key messages, and by presenting data visually it's also possible to uncover surprising patterns and observations that wouldn't be apparent from looking at stats alone. And nowadays, there's plenty of free graphic design software to help you do just that.

Biononymous.me Dr. Josiah Zayner (yeah I know pretty pretentious right?) received his Ph.D. in Molecular Biophysics from the University of Chicago and currently works as a Research Fellow at NASA where he engineers bacteria for in situ resource utilization and sustainability for long-term space exploration and colonization. He has a number of Scientific publications and awards for his work on protein engineering and is also recipient of Art awards for creating Speculative Science works including the Chromochord, the first ever bioelectronic musical instrument.

Infographic: 50 People Shaping The Future Of Design In our design issue last year, the Co.Design 50 laid out 50 of the most influential designers in America. This year, as a sequel, we took it upon ourselves to highlight 50 people who are shaping the future of design. That sounds like a funny task. But our staff was after people pushing the boundaries of their discipline into promising new directions.

Designing Visualizations for Time-Based Data Most interaction designers understand the concept of timelines and other time-based data. Blogs, calendars, and to-do lists are all examples of time-based data. However, if you are trying to fit 400 data points into a 1024 x 726 screen you’ll quickly see how challenging time-base data can be. Currently, many interaction designers are turning to visualizations to overcome many of the issues associated with this form of data representation.

Apps/Dia Welcome to Dia's new homepage. Dia is a GTK+ based diagram creation program for GNU/Linux, MacOS X, Unix, and Windows, and is released under the GPL license. Dia is roughly inspired by the commercial Windows program 'Visio,' though more geared towards informal diagrams for casual use. It can be used to draw many different kinds of diagrams. World Processor x Geo-Cosmos World Processor is an ongoing project visualizing data on readymade globes altered by the artist. Globes reflect data available and valid at the time of their origin. Currently there are over 400 different globes.Fine Arts1988- A cast aluminum sculpture derived from a virtually modeled form that combines the silhouettes of China and Korea, seen from the front, and Japan, seen from the side. Installed at Kyushu GeiBunKan (九州芸文館) in Fukuoka-ken, Japan.Fine Arts2013 "Topography Drive" series (2005/2006) generates a unique perspective on the entire Pacific Rim at the scale of 1:1700.000. At 4 inches high and 500 feet long, this particular rendering of radar-generated elevation model data translates into a dimension that breaks the confines of a traditional gallery or museum space.