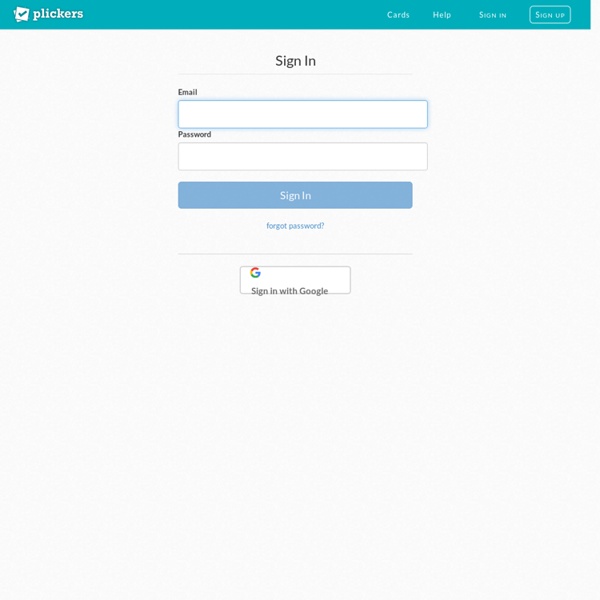 40 Alternative Assessment Ideas for Learning When people think of assessment, pencils and bubble sheets may be the first things that come to mind. Assessment does not always have to involve paper and pencil, but can instead be a project, an observation, or a task that shows a student has learned the material. In the end, all we really want to know is that the skill was mastered, right? Helping the Poor in Education: The Power of a Simple Nudge Photo There are enormous inequalities in education in the United States. A child born into a poor family has only a 9 percent chance of getting a college degree, but the odds are 54 percent for a child in a high-income family.

EDpuzzle Educator Review Start out with Edpuzzle using video for the purpose of pre-teaching, perhaps pairing videos with text in any content area where students might need scaffolding or supports. Use the voice-over feature to add a few quick checks to read-aloud videos to engage and support struggling readers, introducing vocabulary words (pronunciation, meaning, synonyms) along the way. For math centers, record yourself teaching a concept, and have the kids stop for practice and submit their answers. Want to flip your flipped classroom? Let kids use the tool to create a video lesson, and choose some of the best for their peers to complete on their own. Then, go into depth in class to expand upon what students learned from remixing their videos.

European Cybercrime Centre - EC3 Europol set up the European Cybercrime Centre (EC3) in 2013 to strengthen the law enforcement response to cybercrime in the EU and thus to help protect European citizens, businesses and governments from online crime. Cybercrime costs EU Member States EUR 265 billion a year. For the global economy, that figure is around EUR 900 billion. And that’s just the financial side. Cybercrime is actually a wide and varied problem. Stimulate your students with these 10 creative self assessment ideas As a teacher, you have to give constructive feedback all the time. And if you’re really giving so much meaningful feedback, then, that’s terrific! But not all teachers have the time to give students feedback all the time. It’s nice to know that giving feedback and grading your students is not the only way to assess students. This post will guide you through some creative and new ways of self assessment. Yes, that’s right.

Why App Smash? Inspired by the last #1to1iPadChat , I thought it was time to post on the world craze that is App Smashing. The term App Smash was coined by the great Greg Kulowiec (@gregkulowiec) from EdTech Teacher fame. It is a hot topic in EdTech and obviously has its own Hashtag – #AppSmash. Engage students with interactive images and videos — thinglink ThingLink for teachers and schools Create visual experiences for student-centered learning Start now Trusted Partners Sign up now or contact your closest Microsoft or Google for Education reseller.

Adylkuzz Cryptocurrency Mining Malware Spreading for Weeks Via EternalBlue/DoublePulsar Overview On Friday, May 12, attackers spread a massive ransomware attack worldwide using the EternalBlue exploit to rapidly propagate the malware over corporate LANs and wireless networks. EternalBlue, originally exposed on April 14 as part of the Shadow Brokers dump of NSA hacking tools, leverages a vulnerability (MS17-010) in Microsoft Server Message Block (SMB) on TCP port 445 to discover vulnerable computers on a network and laterally spread malicious payloads of the attacker’s choice. This particular attack also appeared to use an NSA backdoor called DoublePulsar to actually install the ransomware known as WannaCry. Over the subsequent weekend, however, we discovered another very large-scale attack using both EternalBlue and DoublePulsar to install the cryptocurrency miner Adylkuzz. Symptoms of this attack include loss of access to shared Windows resources and degradation of PC and server performance.

Examples of Innovative Assessments Concept maps provide a visual representation of connections between concepts that students have learned. These concepts are connected by directional, labeled links to show the relationships between them. Concept maps are excellent tools that can provide instructors with a formative assessment of students’ learning and misunderstandings, after the students were introduced to the new material. For example, the instructor can post an incomplete concept map where students are asked to fill in the blanks to build a complete map, which is then submitted to an instructor in class or via an online drop box.