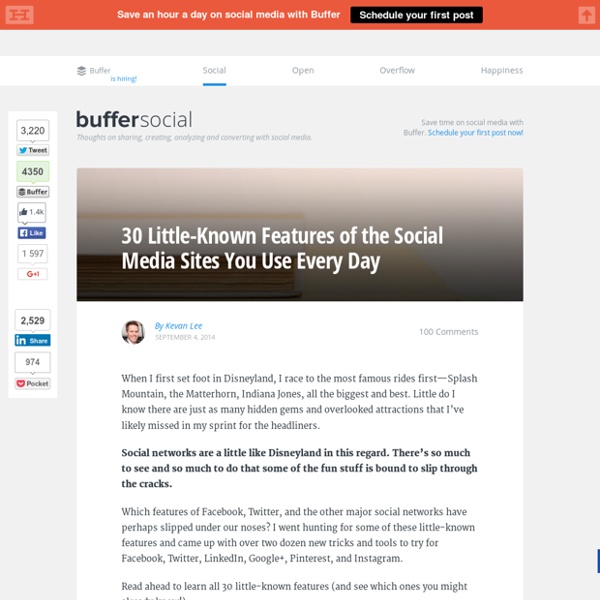 When I first set foot in Disneyland, I race to the most famous rides first—Splash Mountain, the Matterhorn, Indiana Jones, all the biggest and best. Little do I know there are just as many hidden gems and overlooked attractions that I’ve likely missed in my sprint for the headliners. Social networks are a little like Disneyland in this regard. Which features of Facebook, Twitter, and the other major social networks have perhaps slipped under our noses? Read ahead to learn all 30 little-known features (and see which ones you might already know!). Get more clicks, followers, and engagement by sharing to social media sites at the right times! 5 Little-Known Facebook Features 1. Whenever you see a story that someone has shared in your news feed, you’ll find a “Save” option in the drop-down menu under the top, right corner. “Save” also shows up on pages. Where do all these saved posts and pages end up? Once you’ve saved a few, you’ll notice a new menu item in the left sidebar of your homepage. Related:  Social Media Literacy • IT - Social Media

Is Social Media to Blame for the Rise in Narcissism? | Lisa Firestone Studies are now showing what many of you may have suspected: We are living in an increasingly narcissistic society. In a world where prime-time television is dominated by a "reality" as false as the Kardashians' lashes, and people sit across dinner tables checking in on Facebook rather than having face-to-face conversations, this may not come as a surprise. Much has been written about the rise of narcissism amongst millennials, the generation born in the 1980s and 1990s, a generation controversially dubbed "Generation Me" by Professor Jean M. Twenge in 2007. In her most recent work, The Narcissistic Epidemic: Living in the Age of Entitlement, Twenge (with W. Perhaps more troubling, a handful of new studies comparing traits and life goals of young people in high school and college today with those of Gen-Xers and baby boomers at the same age, show an increase in extrinsic values rather than intrinsic values. So who's to blame for this generational increase in narcissism?

default IT professionals are accustomed to thinking about the technical aspects of security. However, as this report has shown, the human element—the techniques that attackers use to trick typical users into helping them—has become just as important for attackers as the technical element, if not more so. By implementing effective technical safeguards, programs, and processes designed to defend against social engineering, you can help your users avoid being taken advantage of by attackers. You can even enlist them as some of your most valuable assets in the fight against security threats. Organizations Your network provides the underlying infrastructure in which your applications are deployed. Minimize and Monitor Your Attack Surface Limit the number of powerful user accounts in your organization and the level of access they have, because this will help limit the harm a successful social engineering attack can cause. Create a Social Engineering Incident Response Plan Software People

Twitter Ad Framework: the beginner's guide You might have received some emails from Twitter over the last few months sharing the latest changes they are making to help advertisers accomplish their marketing objectives. Frankly, I just receive too many emails from Twitter, and I’ve lost count of how many times I simply marked them as read. But one particular promotional email grabbed my attention: Have you seen this? It should like familiar to Facebook advertisers- Like Facebook, Twitter has streamlined its ad offerings to help advertisers create campaigns that better match their marketing goals. Like Facebook, Twitter’s Ad Framework is also objective-driven. The new objective-based ad framework offers advertisers the possibility to accomplish 5 key goals: Growing the number of followersFinding more leads on TwitterIncreasing clicks and/or conversionsAttracting more people to install your appDriving engagement 1. To grow your followers, Twitter offers you the following targeting options: InterestsKeywordsLocations According to Twitter,

Manage all your content from a single WordPress install How would you like to be able to publish to as many different WordPress sites as you liked from a single install? So you only need one configured install of editflow and one set of plugins (listed below) together with one place to login and manage your content. Welcome to the WordPress Content Hub – a solution for push syndicating content to any WordPress install, be it multisite or on WordPress.com… let’s get publishing! Hub and Spokes All content management systems, from the simplest blogging platforms to the most complicated enterprise-level applications perform two major tasks: content management, providing the tools to create, review and ultimately publish content; and, content delivery, actually putting that content into the hands of users. The Content Hub splits out those two functions using a “hub and spoke” model. There are a number of reasons why you might opt for a Content Hub: Benefits of the Hub and Spokes model Single location for content management Simpler WordPress installs 1.

How to Optimize Your Content for the Top 5 Social Networks Are you sharing content on different social networks? Do you know the best way to share it for each platform? Sharing your social media content isn’t a one-message-fits-all exercise. In this article I’ll show you how to share content the right way for the top five social media networks. Find out how to optimize content updates for the top 5 social networks. #1: Use Brief Summaries on Twitter Twitter has always stood apart from other social media networks because of its 140-character limit (which includes spaces and the characters in links and images). A good way to repurpose content for Twitter is to comb through your best summaries or stats. For example, instead of tweeting the title of their article, FastCompany tweeted a summary of it. Make Twitter’s 140-character rule work in your favor with succinct summaries. Key takeaway: As you’re choosing and refining the summaries you’ll share, ask yourself this: “Would I click on this tweet?” #2: Be Conversational on Facebook Conclusion inShare721

How to Run Multiple WordPress Sites from a Single Dashboard How many WordPress sites do you manage? Most beginners start off with just one to try selling a product or to feature their stories, but what if you stumble upon a brilliant new idea, therefore requiring another WordPress site? Or what if you want to build a business around designing websites for other small businesses? You’ll certainly need a reliable and efficient method for managing all these sites in one place. Good thing that’s totally possible then, right? What Tools Do You Need? Thanks to several companies out there, you don’t have to fiddle with any code or create your own system for managing multiple sites in a single dashboard. CMS Commander is one of the leaders in the industry, but a few other companies provide good solutions as well. Managing Multiple WordPress Sites on One Dashboard With CMS Commander CMS Commander works using a simple interface, and the setup process is fairly easy for beginners. Step 1: Sign Up for CMS Commander Go to the CMS Commander website. Conclusion

'Publicly Shamed:' Who Needs The Pillory When We've Got Twitter? Writer Jon Ronson has spent a lot of time tracking people who have been shamed, raked over the coals on social media for mostly minor — but sometimes major — transgressions. He writes about some of them in his new book, So You've Been Publicly Shamed. Ronson tells NPR's Steve Inskeep that his anxiety level shot up while he was writing about the victims of public ridicule. "My book has a kind of panicky, heart-racing quality to it," he says, "but in a positive way, because I wanted to say look, if we're going to carry on destroying people for nothing, this is what it feels like." Interview Highlights On what he means by shaming I'm talking specifically about the disproportionate punishment of people who really didn't do very much wrong. On the shaming of Justine Sacco She was going to South Africa for the holidays, and just before she got on the plane, she tweeted, "going to Africa, hope I don't get AIDS, just kidding, I'm white." By the way, her tweet wasn't intended to be racist.

3 Tools for Startup Success | BizCloud® Network As a budding entrepreneur, every day you come face to face with the challenges that accompany launching a startup. Whether you’re seasoned in starting businesses or this is your first time, it won’t come as a shock that you need every advantage you can get to save time and money. Therefore, it’s important to understand how to maximize your use of technology. Here’s a look at three tech tools you can benefit from. Integrated CRM and Marketing At times, it can seem like there are too many CRM, sales and marketing options available to be able to find which one will work for you. If you’re still having trouble deciding which tool makes the most sense for your particular business, take a look at the CRM Watchlist. Streamlined Accounting If your startup’s finances aren’t in order, no volume of sales and creative marketing can save you from an enormous mess. Evaluation of Social Media Once you implement your social media strategy, you might want to look into some analytics programs.

After Daughters Act Up, Mom Turns to Facebook to Make Amends Rebecca Boyd and her daughter Ashley went to the movies Friday, but the night was ruined by two misbehaving teenagers. Photo by Rebecca Boyd. A mother’s Facebook apology for her daughters’ “rude and obnoxious” behavior toward another mother at a movie theater has gone viral. When Birmingham, Alabama, mom Rebecca Boyd took her 12-year-old daughter Ashley to see Cinderella on Friday night, she was hoping for a quiet movie night. STORY: Mom Searching for the Hero Who Saved Her 10-Month-Old Son At the theater two teenage girls took a seat behind Boyd and her daughter. After the movie ended, Boyd sent Ashley to the car and approached the two misbehaving teens outside the theater. STORY: Mom of Four Answers Bullies After Posting Unretouched Photos Boyd says she was aggravated by the way the evening played out but never placed any blame on the girls’ parents. But one woman was furious at the girls’ behavior — their mother. The post was quickly shared around social media.

Instagram for Business: Answers to the 12 Most Common Questions How do you choose which social media networks to participate in? Certainly, there’re a ton to choose from. Are you on Twitter, Facebook, Google+, and LinkedIn? Are you on Pinterest and Tumblr? Instagram and Vine? How many social media networks can you handle? Instagram makes a strong case, if you’re interested in raw numbers and unique appeal. More and more, it seems that companies default to having a Facebook and Twitter account and then make the choice for a third among Google+, LinkedIn, Pinterest, and Instagram. So the next question becomes: How do you get started with Instagram for business? We’ve talked on the blog before about general Instagram stats and tips. How can I get started with Instagram? How can I get started with Instagram? You can download the app for iOS or Android or view photos and follow users straight from the web. If you’re a brand starting from scratch, there are many creative ways you can launch your Instagram account. Square images reign on Instagram.