Sam Harris on Spirituality without Religion, Happiness, and How to Cultivate the Art of Presence 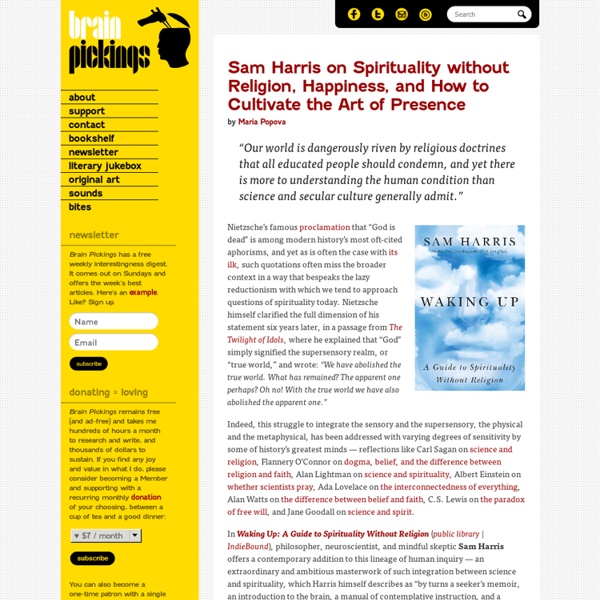 by Maria Popova “Our world is dangerously riven by religious doctrines that all educated people should condemn, and yet there is more to understanding the human condition than science and secular culture generally admit.” Nietzsche’s famous proclamation that “God is dead” is among modern history’s most oft-cited aphorisms, and yet as is often the case with its ilk, such quotations often miss the broader context in a way that bespeaks the lazy reductionism with which we tend to approach questions of spirituality today. Nietzsche himself clarified the full dimension of his statement six years later, in a passage from The Twilight of Idols, where he explained that “God” simply signified the supersensory realm, or “true world,” and wrote: “We have abolished the true world. What has remained? The apparent one perhaps? Sam Harris by Bara Vetenskap Harris writes: Our minds are all we have. It would not be too strong to say that I felt sane for the first time in my life. Donating = Loving

AWAKE: The Life of Yogananda Synopsis AWAKE: The Life of Yogananda is an unconventional biography about the Hindu Swami who brought yoga and meditation to the West in the 1920s. Paramahansa Yogananda authored the spiritual classic “Autobiography of a Yogi,” which has sold millions of copies worldwide and is a go-to book for seekers, philosophers and yoga enthusiasts today. The video that changed everything I thought I know about non-attachement. {Video} The Heart of Non-Attachment True non-attachment is an intimacy with life. Buddhist teacher and yogi Michael Stone shares his perspective on how to live an engaged life. Shot and edited by Ian MacKenzie. Editor: Brianna Bemel

Paranormal, UFOs, Cryptids and Unexplained Phenomena Arguments can be made that the evidence for ancient astronauts comes from supposed gaps in historical and archaeological records, and they also maintain that absent or incomplete explanations of historical or archaeological data point to the existence of ancient astronauts. The evidence is said to include archaeological artifacts that are beyond the presumed technical capabilities of the historical cultures with which they are associated. This also includes artwork and legends that are interpreted as depicting extraterrestrial contact or technologies. Notwithstanding these contentions, let us say that there is an axiom to the ancient astronaut theory. Then we need to ask, who were these beings? What did they represent to the inhabitants of earth?

An Interview with Douglas R. Hofstadter, following ''I am a Strange Loop'' Douglas R. Hofstadter is best-known for his book Gödel, Escher, Bach (GEB for short). In his latest book, I am a Strange Loop, he visits once again many of the themes originally presented in that book. Pray the Devil Back to Hell This powerful documentary film has been screened at: · World Economic Forum· United Nations· U.S. Department of State· Ministry of Foreign Affairs at the Hague Quotes "UPLIFTING, DISHEARTENING, INSPIRING, ENRAGING"—The New York Times "MARVELOUS"—The Los Angeles Times

How We Spend Our Days Is How We Spend Our Lives: Annie Dillard on Presence Over Productivity by Maria Popova “The life of sensation is the life of greed; it requires more and more. The life of the spirit requires less and less.” The meaning of life has been pondered by such literary icons as Leo Tolstoy (1904), Henry Miller (1918), Anaïs Nin (1946), Viktor Frankl (1946), Italo Calvino (1975), and David Foster Wallace (2005). And though some have argued that today’s age is one where “the great dream is to trade up from money to meaning,” there’s an unshakable and discomfiting sense that, in our obsession with optimizing our creative routines and maximizing our productivity, we’ve forgotten how to be truly present in the gladdening mystery of life.

A Blood Soaked History: From Lilith to Dracula - The Vampire Myth Exposed - Vampire Mythology review - The Vampire Historians WARNING: This is a review of vampire myths from around the world, and it contains what some may find to be controversial and disturbing content having to do with occult subject matter, violence, sexuality, and religious folklore. Foreword Myths and legends of vampires are widespread. Tales of their existence can be found in virtually every culture across the globe and they date back to thousands of years ago. I Am a Strange Loop I Am a Strange Loop is a 2007 book by Douglas Hofstadter, examining in depth the concept of a strange loop to explain the sense of "I". The concept of a strange loop was originally developed in his 1979 book Gödel, Escher, Bach. Hofstadter had previously expressed disappointment with how Gödel, Escher, Bach, which won the Pulitzer Prize in 1980 for general nonfiction, was received. In the preface to its 20th-anniversary edition, Hofstadter laments that the book was perceived as a hodgepodge of neat things with no central theme. He states: "GEB is a very personal attempt to say how it is that animate beings can come out of inanimate matter.