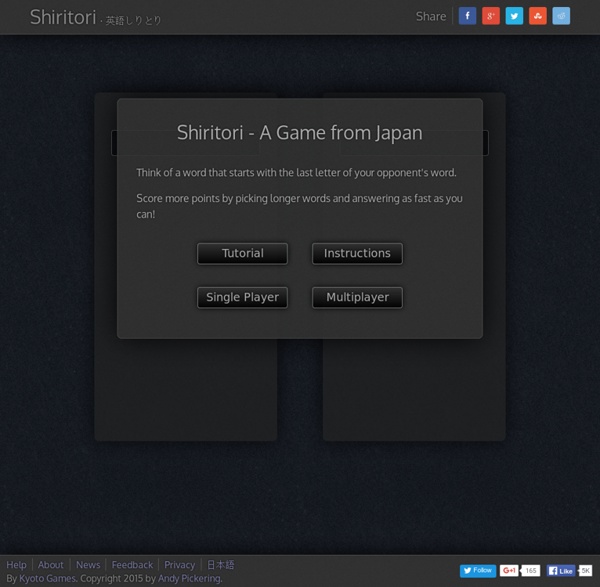 Ultimate Tic-Tac-Toe Updated 7/16/2013 – See Original Here Once at a picnic, I saw mathematicians crowding around the last game I would have expected: Tic-tac-toe. As you may have discovered yourself, tic-tac-toe is terminally dull. There’s no room for creativity or insight. Good players always tie. 2048 Join the numbers and get to the 2048 tile! New Game How to play: Use your arrow keys to move the tiles. When two tiles with the same number touch, they merge into one! Note: The game on this site is the original version of 2048. Streets of Rage Online - The #1 SOR Resource Site and Fan Community Streets of Rage 4 HD is a very ambitious SOR fangame which began development in early 2010, made using the popular OpenBoR engine. Produced by Zhang Qiang and Allan.Cylakes, the game showcases some impressive and unique hand-painted sprites, backgrounds and cutscene artworks, courtesy of the talented Huang Wentao and Xia Ji. The development team have gone to ground in an attempt to completely re-imagine the visual style of SOR in High Definition, and the result, as you can see from the screenshots here, is breathtaking. There is a lot of potential here, and it promises to be something very special indeed if the gameplay can match the quality of the visuals.

Trivia Crack A to K - 2048 clone by Creative Spark Studios How to play: Use your arrow keys to move the tiles. When two tiles with the same letter touch, they merge into the next letter in the alphabet! The goal is to create the letter K. Note: This is a clone of the official open-sourced game called 2048, which is itself a clone of the game called 1024, which was already very similar to a game called Threes. The graphics in this version are inspired by our word game WordIt 2. Game recommendation: Players who enjoy A to K, may want to try our other game Triangular 2048.

Play BREAKTHROUGH, a free online game on Kongregate Check your security settings Connection issues are typically caused by security settings on your network or computer. Check that your firewall or router has port 5222 open and allowing traffic. If you are on a school or office network, you may need to contact your network administrator to make the necessary changes. Is your version of Flash current? Some old versions of Flash don't work well with our new chat application. You can go to to get the newest version. Fundamentals - Fallout 3 Wiki Guide - IGN Last Edited: September 9, 2013 at 10:13 PM Overview[edit] Fallout 3 is a post-apocalyptic western RPG with enough shooting mechanics that it is, indeed, a full-fledged hybrid title. You're given control of a male or female (depending on who you choose) who lives in a heavily-guarded nuclear fallout shelter.

25 Hidden Locations In Grand Theft Auto 5 Even Super Fans Haven't Found Grand Theft Auto V has long been one of the shining examples of what an open-world game should be like. If you haven't played it, you definitely have something to look forward to when you do pick the game up. When I first played GTA V, I felt totally overwhelmed by the freedom of it all. You might laugh at me, but I actually had a momentary sense of panic where I did not know exactly what I should do next.