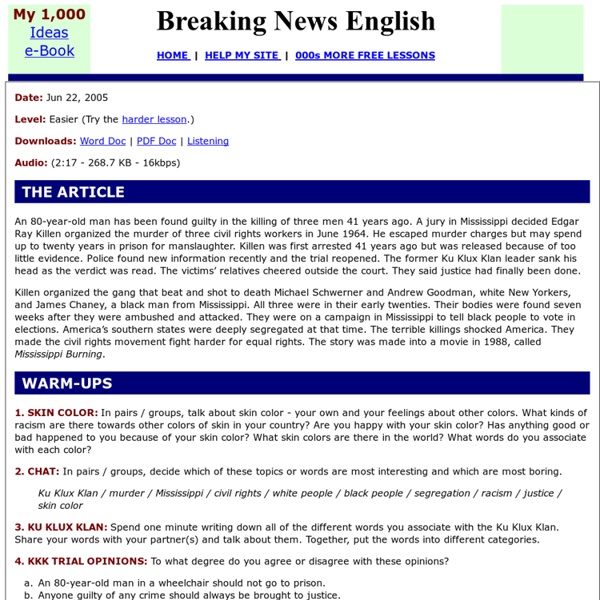 An 80-year-old man has been found guilty in the killing of three men 41 years ago. A jury in Mississippi decided Edgar Ray Killen organized the murder of three civil rights workers in June 1964. He escaped murder charges but may spend up to twenty years in prison for manslaughter. Killen was first arrested 41 years ago but was released because of too little evidence. Police found new information recently and the trial reopened. The former Ku Klux Klan leader sank his head as the verdict was read. Killen organized the gang that beat and shot to death Michael Schwerner and Andrew Goodman, white New Yorkers, and James Chaney, a black man from Mississippi. 1. 2. Ku Klux Klan / murder / Mississippi / civil rights / white people / black people / segregation / racism / justice / skin color 3. 4. An 80-year-old man in a wheelchair should not go to prison. Talk first about the people in your neighboring countries. You could also talk about the following people: 1. 2. 3. 1. 2. 3. 4. 5. 6. 1. 2. 3.

Strangers This EFL lesson is designed around a beautiful short film called Strangers directed by Erez Tadmor and Guy Nattiv, and the theme of racism. Students predict a story, watch a short film, speak about racism and write a narrative. I would ask all teachers who use Film English to consider buying my book Film in Action as the royalties which I receive from sales help to keep the website completely free. Language level: Intermediate (B1) – Upper Intermediate(B2.11) Civil Rights Movement: "Black Power" Era The impressive March on Washington in the summer of 1963 has been remembered as one of the great successes of the Civil Rights Movement, a glorious high point in which a quarter of a million people—black and white—gathered at the nation's capital to demonstrate for "freedom now." But for many African Americans, especially those living in inner-city ghettos who discovered that nonviolent boycotts and sit-ins did little to alter their daily lives, the great march of 1963 marked only the first stage of a new, more radical phase of the Civil Rights Movement. You probably just finished reading the first chapter of the Civil Rights Movement. (Hint, hint.)

Britain is GREAT The GREAT Britain campaign showcases the very best of what Britain has to offer. We welcome the world to visit, study and do business with the UK. Business The UK’s dynamic economy and business-friendly environment make it a great place to locate and expand your business. Get support to export and invest in the UK from UK Trade & Investment (UKTI). International Day for the Elimination of Racial Discrimination Water sports by Mike Rayner We'll all be planning that route We're gonna take real soon We're waxing down our surfboards We can't wait for June We'll all be gone for the summer We're on surfari to stay Tell the teacher we're surfin' Surfin' U. S. A. (Chuck Berry, Brian Wilson) Civil Rights Movement: Desegregation The Civil Rights Movement is sometimes defined as a struggle against racial segregation that began in 1955 when Rosa Parks, the "seamstress with tired feet," refused to give up her seat to a white man on a bus in Alabama. Brown v. Board of Education, the 1954 Supreme Court case that attacked the notion of "separate but equal," has also been identified as the catalyst for this extraordinary period of organized boycotts, student protests, and mass marches. These legendary events, however, did not cause the modern Civil Rights Movement, but were instead important moments in a campaign of direct action that began two decades before the first sit-in demonstration. The story of the American Civil Rights Movement is one of those tales that is told again and again and again, often with a few protagonists, a couple of key events, and one dramatic conclusion.

Terrorists Kill More Than 100 in Paris French President Francois Hollande has called the deadly attacks on Paris “an act of war.” The French leader spoke after the Islamic State militant group said it was responsible for the violence in the French capital Friday. Six coordinated attacks killed at least 129 people.

CIVIL WAR - Giving Voice to the Invisible Partipants: Introduction by Margarert Garcia, Hosler Middle School Modified by Cherie Lange, CV Middle School Students will research the "other" groups involved in the Civil War. These people were rarely mentioned or recognized in text books due to their lack of political, social or economic power in this turbulent time in U.S. history Introduction Your publishing firm has just started a new magazine. Discrimination and Racism: Process This webquest will serve as your final for this semester. This unit will take the remaining two weeks to research your civil rights leaders, create a story board, write a script for the round table discussion, perform the round table discussion, record your performance, and evaluate your production. Be aware that your productions will be shared with other American Literature classes on campus during Finals Week.

Your meat addiction is destroying the planet “Jesus,” Molly said, her own plate empty, “gimme that. You know what this costs?” She took his plate. “They gotta raise a whole animal for years and then they kill it. This isn’t vat stuff.” She forked a mouthful up and chewed.” – William Gibson, Neuromancer (1984)

Discrimination based on Race 2. Exploring Institutional Racism: The case of apartheid and the Holocaust (60- 90 minutes per case study) Note: This activity requires two handouts for each case study. Each case study includes an Introduction and Timeline. Ethnicity 3. Optional: Poetry (25-45 minutes. Some parts can be done as homework.) Note: In this activity, students create poems about their backgrounds; each stanza begins with the phrase "Where I'm From." Music is Great From hip hop to jazz … from dance to the blues: it’s music, and there’s a style for everyone. Some of the greatest music in the world comes from Britain, and British music is still topping the charts today. The Premises recording studios are big players in the music industry.