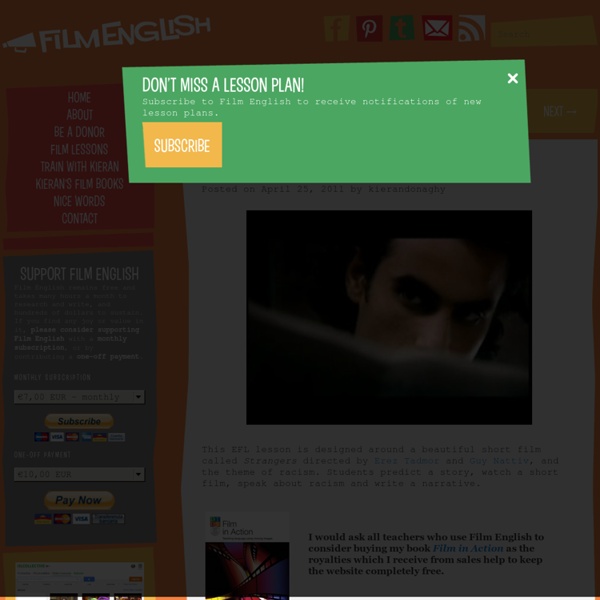 This EFL lesson is designed around a beautiful short film called Strangers directed by Erez Tadmor and Guy Nattiv, and the theme of racism. Students predict a story, watch a short film, speak about racism and write a narrative. I would ask all teachers who use Film English to consider buying my book Film in Action as the royalties which I receive from sales help to keep the website completely free. Language level: Intermediate (B1) – Upper Intermediate(B2.11) Learner type:Teens and adults Time: 90 minutes Activity: Predicting a story, watching short film, speaking and writing a narrative Topic: Racism Language: Adjectives to describe character and appearance, and narrative tenses Materials: Short film, discussion questions and anti-racism posters Downloable materials: strangers lesson instructions anti-racism posters racism discussion questions Support Film English Film English remains ad-free and takes many hours a month to research and write, and hundreds of dollars to sustain. Step 1 Step 2

Civil Rights Movement Heroes for Kids (Rosa Parks, Martin Luther King Jr.) by Borgna Brunner The civil rights movement of the 1950s and 1960s challenged racism in America and made the country a more just and humane society for all. Below are a few of its many heroes. What can Teachers Learn from Nelson Mandela to Make a Difference? We teach language to help people communicate. Why do people want to communicate? ​ ​To express the human story through myth, inspiration and powerful transformation. ​ ​Let’s dig deeper into the story of Nelson Mandela and help our students think, communicate and become active narrators in the search for peace and what makes us human. What can we teach students about Nelson Mandela through the power of video and multi-media? Breaking News English ESL Lesson Plan on Racism An 80-year-old man has been found guilty in the killing of three men 41 years ago. A jury in Mississippi decided Edgar Ray Killen organized the murder of three civil rights workers in June 1964. He escaped murder charges but may spend up to twenty years in prison for manslaughter. Killen was first arrested 41 years ago but was released because of too little evidence.

Love Actually: activities, ideas, vocabulary I use a lot of films in my teaching: not just occasional Youtube clips but full-length authentic feature films, and I’ve been wanting for a while to start a new section on this blog where I would upload my film-based materials. I thought December would be a suitable time to share materials for many people’s favourite Christmas film Love Actually.Warning: some scenes are suitable for adults only Activities actually The activities are divided into three parts. They are not particularly imaginative - mainly questions to answer while watching. Feel free to adapt them.Pages 1-2 are for the first part of the film (until 4 weeks to Christmas title appears )Pages 3-8 focus on various characters.

International Day for the Elimination of Racial Discrimination Water sports by Mike Rayner We'll all be planning that route We're gonna take real soon We're waxing down our surfboards We can't wait for June We'll all be gone for the summer We're on surfari to stay Tell the teacher we're surfin' Surfin' U. S. From NY to Texas, KKK recruits with candies and fliers Your video will begin momentarily. Ku Klux Klan recruitment fliers are turning up on driveways across the countryFliers, usually left with candies, appear to be part of a wider recruitment effortThe Klan may be seizing on a time when race and immigration are dominant issues, some say (CNN) -- Carlos Enrique Londoño laughs at the Ku Klux Klan recruitment flier recently left on the driveway of his suburban New York home. It's unlikely the group would accept him.

Celebrating MLK Day Updated: Jan., 2014 In recognition of Martin Luther King Jr. Day, here is a collection of New York Times, Learning Network and other materials for teaching and learning about Dr. King, the civil rights movement he led and his legacy. CIVIL WAR - Giving Voice to the Invisible Partipants: Introduction by Margarert Garcia, Hosler Middle School Modified by Cherie Lange, CV Middle School Students will research the "other" groups involved in the Civil War. These people were rarely mentioned or recognized in text books due to their lack of political, social or economic power in this turbulent time in U.S. history

Discrimination and Racism: Process This webquest will serve as your final for this semester. This unit will take the remaining two weeks to research your civil rights leaders, create a story board, write a script for the round table discussion, perform the round table discussion, record your performance, and evaluate your production. Be aware that your productions will be shared with other American Literature classes on campus during Finals Week. DO NOT PROCRASTINATE! Make sure to use the planning guide given in class.