How to Write with Style: Kurt Vonnegut’s 8 Keys to the Power of the Written Word 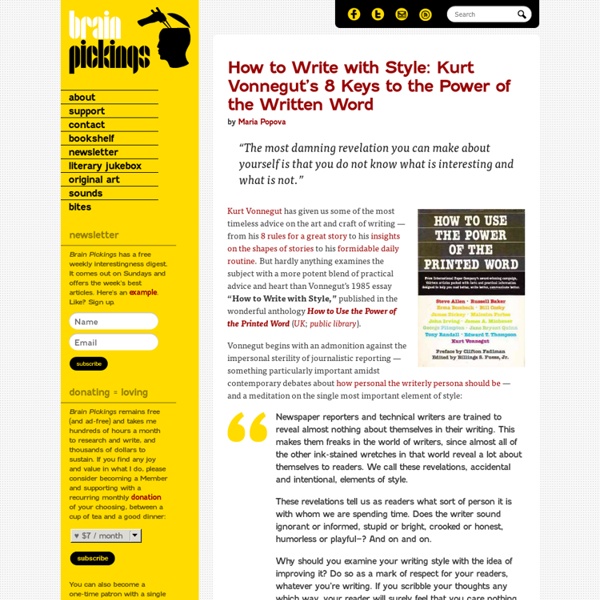 Find a Subject You Care About Find a subject you care about and which you in your heart feel others should care about. It is this genuine caring, and not your games with language, which will be the most compelling and seductive element in your style. I am not urging you to write a novel, by the way — although I would not be sorry if you wrote one, provided you genuinely cared about something. A petition to the mayor about a pothole in front of your house or a love letter to the girl next door will do. Do Not Ramble, Though I won’t ramble on about that. Keep It Simple As for your use of language: Remember that two great masters of language, William Shakespeare and James Joyce, wrote sentences which were almost childlike when their subjects were most profound. Simplicity of language is not only reputable, but perhaps even sacred. Have the Guts to Cut It may be that you, too, are capable of making necklaces for Cleopatra, so to speak. Sound like Yourself Say What You Mean to Say Pity the Readers

Writing Tips: Using Sentence Length to Mirror Action Long, short, and in-between: more is communicated in the length and rhythm of our sentences than most of us suspect. One of language's most fascinating tricks is its ability to mirror the action it depicts. For example, look at this piece of narrative: "The squirrel fidgeted, twitching its tail, as I inched closer with my hand outstretched. It bit me, and I yelled." Shortening the sentences and rearranging them slightly sharpens the action:

Inforg Inforgs are informationally embodied organisms, entities made up of information, that exist in the infosphere. These informationally embodied organisms are also called natural agents. Description[edit] Inforgs was used by Luciano Floridi to describe what makes up an infosphere.[1] The usage of the word describes organisms that are made up of information rather than "standalone and unique entities". This description of inforgs allows them to exist in the infosphere as natural agents alongside artificial agents. Single Quotation Marks Versus Double Quotation Marks Today's topic is single quotation marks versus double quotation marks. SPONSORED BY AUDIBLE.COM, the Internet's leading provider of audiobooks with more than 75,000 downloadable titles across all types of literature, including fiction, non-fiction and periodicals. For a free audiobook of your choice, go to audiblepodcast.com/gg. How to Use Double Quotation Marks Most people think of double quotation marks as being for quotations, which they are, but they also have other legitimate uses.

LivesOn says death is no excuse to stop tweeting Just in case the zombie apocalypse makes the scenario viable, post-mortem, would you like your inert corpse to be propped up in front of a keyboard so you can keep tweeting? Happily, things don't have to get fetid. To enable a continuous warbling in spite of the hindrance of rigor mortis, we will soon have LivesOn - a service that promises that after your heart stops beating, you can keep tweeting. According to The Telegraph's Theo Merz - one of only about 20 lucky stiffs who got in on the trial - the tester version of LivesOn was made available during the week of 12 August, ahead of a public roll-out scheduled for September.

Punctuation Tips Punctuation marks are to writing what vocal delivery is to speech. Can you imagine talking in a monotone without pause? Your audience would have difficulty making sense of your words, let alone figuring out where emphasis and nuance belong. If you drain the punctuation from your writing, you have no louds, no softs, no expression, no innuendo. If you use only a few punctuation marks, you seriously restrict your style. If you misuse punctuation marks, you send your reader down the wrong road, maybe even up a tree.

5 Futuristic Trends That Will Shape Business And Culture Today Trend-spotting shop Sparks & Honey has given us ideas to watch in health care, jobs we might be doing in 2025, and the future of relationships. Here, the shop takes a deep-dive into the zeitgeist to identify cultural trends. They're themes that could affect business, and therefore how we live, in the next year or two. 12 Useful Websites to Improve Your Writing by Johnny Webber 1. Words-to-Use.com – A different kind of thesaurus. 2. Will we ever have love affairs with video game characters? In Spike Jonze’s new movie Her, Joaquin Phoenix is an introverted writer on the verge of divorce who falls in love with his computer’s intelligent operating system. Exactly how far-fetched or credible you think that is probably depends on how invested you are in technology. It was after all, inspired by the real-life web application Cleverbot, which lets visitors engage in conversations with an AI program; and in a lot of ways the movie is a study of our growing reliance on devices as mediators in our social lives and love affairs. From Siri to Tinder, our smartphones and tablets are simultaneously humansing themselves while mechanising our relationships with other humans. How long before we fall for the devices themselves? Really though, this is already happening in video games, where non-player characters are becoming ever more complex, both in terms of visual representation and “intelligence”.

45 ways to avoid using the word 'very' Writers Write is your one-stop resource for writers. Use these 45 ways to avoid using the word ‘very’ to improve your writing. Good writers avoid peppering their writing with qualifiers like ‘very’ and ‘really’. Being someone else: How virtual reality is allowing men and women to swap bodies It’s disorienting to look in the mirror and see yourself as another gender. I’m wearing my Oculus Rift development kit, and the virtual reality hardware gives me the illusion of being in a comfortable room in an Italian villa. There is a mirror in the room, and in it I don’t see myself, but a woman. My brain doesn’t quite know what to do with this information.

Common Mistakes in Writing Some writing mistakes are very common and frequently seen in both printed material and online. This page details some of the most common and easily avoidable writing mistakes. By learning to recognise such errors you can improve your writing skills and avoid common writing mistakes in the future. You should also read our Spelling, Punctuation and Grammar pages to aid your understanding of the writing process and help you avoid other mistakes. Remember mistakes in writing can be embarrassing and costly - would you buy from a company whose marketing material was peppered with common mistakes that could have been easily avoided? Take some time to familiarise yourself with the mistakes listed on this page and remember to always get somebody else to check your writing before it is published - even the most confident writers make mistakes sumtimes!

5 Future Technology Myths" The flying car has been prophesied for decades. It's one of the holy grails of the futuristic, utopian society, where everyone gets to zip around through the air and land easily, quietly and safely wherever he or she wants. You've probably seen videos of flying-car prototypes, taking off from the ground, hovering and possibly crashing. But the first "autoplane" was actually unveiled in 1917, and many similar efforts have followed. Henry Ford predicted the flying car was coming -- in 1940 -- and there have been numerous false alarms ever since.

Outlining, Writing, & Brainstorming using Mapping, Graphic Organizers and other Visual Thinking Techniques For visual mapping, outlining, writing and making presentations, use Inspiration® 9, the ultimate thinking and learning tool. Brainstorm ideas, structure your thoughts and visually communicate concepts to strengthen understanding with the Diagram and Map Views. To take notes, organize information, and structure writing for plans, papers and reports, use the integrated Outline View to focus on main and supporting ideas and to clarify thinking in written form.