The Upside of Pessimism 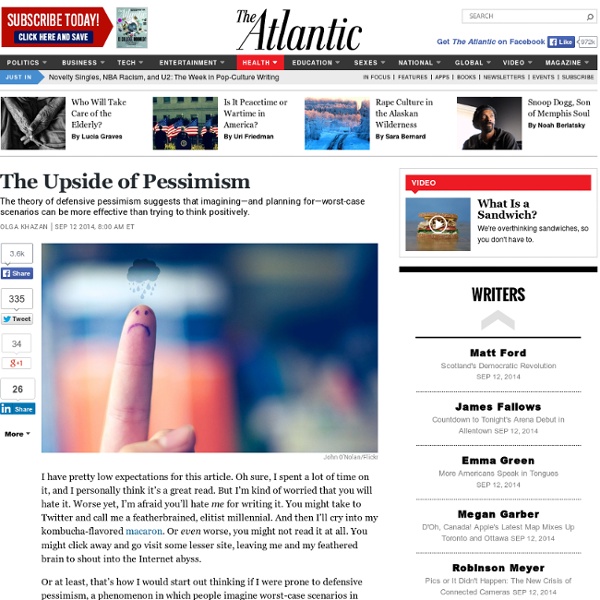 The theory of defensive pessimism suggests that imagining—and planning for—worst-case scenarios can be more effective than trying to think positively. I have pretty low expectations for this article. Oh sure, I spent a lot of time on it, and I personally think it’s a great read. But I’m kind of worried that you will hate it. Worse yet, I’m afraid you’ll hate me for writing it. You might take to Twitter and call me a featherbrained, elitist millennial. Or at least, that’s how I would start out thinking if I were prone to defensive pessimism, a phenomenon in which people imagine worst-case scenarios in order to manage their anxiety. This type of negativity might sound like apostasy by American standards. I recently spoke with Norem, a pioneer of the defensive pessimism theory. A lightly edited transcript of our conversation follows, and you can take a test to find out if you’re a defensive pessimist here. Olga Khazan: What is defensive pessimism? Khazan: How would I apply this in real life?

How Successful Leaders Think We are drawn to the stories of effective leaders in action. Their decisiveness invigorates us. The events that unfold from their bold moves, often culminating in successful outcomes, make for gripping narratives. Perhaps most important, we turn to accounts of their deeds for lessons that we can apply in our own careers. The Health Effects of Leaving Religion Curtis Penfold got kicked out of his apartment, fired from his job, and left Brigham Young University all in the same week. He left BYU—a private university operated by The Church of Latter-day Saints—because he had started to disagree with some of the Church’s views, causing tension between him and school officials. His exit from the school caused him to lose his on-campus job, and he subsequently resigned from the Mormon Church. Resigning from the church resulted in getting kicked out of his religiously-affiliated private housing, and he received angry emails from old friends and phone calls from his disappointed parents who said he “lost the light” and “used to be so good.” “I felt so hated by this community I used to love,” Penfold said. Penfold originally went to BYU to be around fellow Mormons.

Via Rgiskard: Saudi Woman Convicted Of Adultery Gets Death Sentence, Partner Gets 100 Lashes By : Ben Hayward | 27/11/15 5kShares A Saudi Arabian woman convicted of adultery faces being stoned to death but the man she was caught with faces the lesser punishment of 100 lashes. The married 45-year-old woman, who was working as a maid in Riyadh, and her partner, a single migrant worker from Sri Lanka, were both convicted of the same offence, yet her punishment is far more severe than his. Upul Deshapriya, a spokesman for the Foreign Employment Bureau told the Reuters: She has accepted the crime four times in the courts. What Makes a Leader? Every businessperson knows a story about a highly intelligent, highly skilled executive who was promoted into a leadership position only to fail at the job. And they also know a story about someone with solid—but not extraordinary—intellectual abilities and technical skills who was promoted into a similar position and then soared. Such anecdotes support the widespread belief that identifying individuals with the “right stuff” to be leaders is more art than science. After all, the personal styles of superb leaders vary: Some leaders are subdued and analytical; others shout their manifestos from the mountaintops. And just as important, different situations call for different types of leadership.

The Danish Don't Have the Secret to Happiness Something is rotten in the state of Denmark. Danish author Askel Sandemose’s works are little read in his home country these days—except, that is, for a small fragment of one novel, A Fugitive Crosses His Tracks, published in 1933. The fragment of A Fugitive that has come both to define and to torment the Danes is a list of rules by which the residents of the fictional town of Jante were said to abide.

Renata Salecl on Modern Misery Why misery? I wanted to go against the presumption that happiness is the theme of today’s life. This ideology of happiness has actually produced more unhappiness than needed, since we’ve constantly been measuring our lives with regard to success, or self-fulfilment, or enjoyment. From a psychoanalytic point of view it’s been known for a long time that total satisfaction is completely impossible to attain. The books I chose describe the most prevalent forms of unhappiness linked to the expectations that we have in today’s post-industrial capitalism. Those expectations are: long life, beautiful body, a sexually satisfied life, creatively satisfied life, an ideal of self-making.

Meeting the Challenge of Disruptive Change These are scary times for managers in big companies. Even before the Internet and globalization, their track record for dealing with major, disruptive change was not good. Out of hundreds of department stores, for example, only one—Dayton Hudson—became a leader in discount retailing. Not one of the minicomputer companies succeeded in the personal computer business. Medical and business schools are struggling—and failing—to change their curricula fast enough to train the types of doctors and managers their markets need. The list could go on.

Not all scientific studies are created equal - David H. Schwartz "A popular study from the 1970s that helps sell millions of dollars' worth of fish oil supplements worldwide is deeply flawed, according to a new study being published in the Canadian Journal of Cardiology. The original study, by Danish physicians H.O. Bang and D.J. Saudi court sentences poet to death for renouncing Islam A Palestinian poet and leading member of Saudi Arabia’s nascent contemporary art scene has been sentenced to death for renouncing Islam. A Saudi court on Tuesday ordered the execution of Ashraf Fayadh, who has curated art shows in Jeddah and at the Venice Biennale. The poet, who said he did not have legal representation, was given 30 days to appeal against the ruling. Fayadh, 35, a key member of the British-Saudi art organisation Edge of Arabia, was originally sentenced to four years in prison and 800 lashes by the general court in Abha, a city in the south-west of the ultraconservative kingdom, in May 2014.

The Best Leaders Are Humble Leaders - Jeanine Prime , and Elizabeth Salib by Jeanine Prime and Elizabeth Salib | 12:00 PM May 12, 2014 In a global marketplace where problems are increasingly complex, no one person will ever have all the answers. That’s why Google’s SVP of People Operations, Lazlo Bock, says humility is one of the traits he’s looking for in new hires. “Your end goal,” explained Bock, “is what can we do together to problem-solve. I’ve contributed my piece, and then I step back.” And it is not just humility in creating space for others to contribute, says Bock—it’s “intellectual humility. The Scalp Industry Although the origins of the practice of scalping may be lost in the nebulous hinterlands of the past, the industry of scalp hunting has a specific and documented history. Although some of the particulars may be shrouded in rumors, the scalp bounty laws instituted a peculiar economic venture between the Mexican government and, primarily, American citizens. Between 1835 and the 1880s, the Mexican authorities paid private armies to hunt Native Americans, paying per kill and using scalps as receipts. The practice began when the Mexican government could no longer provide adequate protection to its citizens from the marauding Apaches and Comanches. The natives rode down from the U.S. killing peons, kidnapping women, and stealing livestock and then would escape back over the border. Bounty Laws

The Secret to Smart Groups Isn't Smart People—It's Women The concept of "general intelligence"—the idea that people who are good at one mental task tend to be good at many others—was considered radical in 1904, when Charles Spearman proposed the theory of a "g factor." Today, however, it is among the most replicated findings in psychology. But whereas in 1904 the U.S. economy was a network of farms, mills, and artisans, today's economy is an office-based affair, where the most important g for many companies doesn't stand for general intelligence, but, rather, groups. So, what makes groups smart? Is there any such thing as a "smart" group, or are groups just, well, clumps of smart people? As a team of scientists from MIT, Carnegie Mellon, and Union College write in this Sunday's New York Times, research suggests that just as some individuals are smarter than others, some groups are smarter than others, across a range of tests and tasks.

Joseph Palmer: Perscuted For Wearing The Beard Recently, I made a special trip up to Evergreen Cemetery in Leominster, Massachusetts to see the grave of Joseph Palmer, a veteran of the War of 1812 and a member of the short-lived Utopian community “the Fruitlands”. I’m not much of a history buff, so why would I drive halfway across the state to seek out the grave of a man who died a century before I was born? It was too interesting of a story not to investigate.