A Practical Guide To Critical Thinking 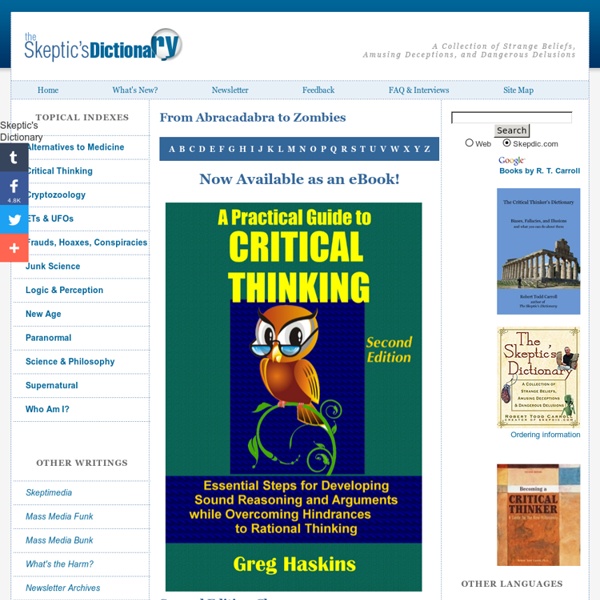 Trulia study finds Americans say they care about the environment but aren't willing to pay for it The extremely dated "It ain't easy being green" title of this Trulia survey actually misinterprets the data; judging by the questions they asked, it is perfectly easy being green; it just ain't cheap. The big real estate site Trulia has done a big poll and discovered that 79 percent of Americans consider themselves to be environmentally conscious. That sounds like a good thing, but when you get right down to it they talk the talk, but few actually walk the walk (well, actually 49 percent do bike or walk), or even drive the drive (only 19 percent). In fact, "Only 26% of Americans say that they actually consider the environment in their daily actions beyond recycling and turning off the lights." Curiously, what seem like easier, cheaper and higher impact actions like living in a smaller home (16%) and buying renewable electricity from a utility provider (10%) are not nearly as high on the list of ways to be environmentally responsible. © Trulia

We don’t need no (moral) education? Five things you should learn about ethics The human animal takes a remarkably long time to reach maturity. And we cram a lot of learning into that time, as well we should: the list of things we need to know by the time we hit adulthood in order to thrive – personally, economically, socially, politically – is enormous. But what about ethical thriving? Do we need to be taught moral philosophy alongside the three Rs? Ethics has now been introduced into New South Wales primary schools as an alternative to religious instruction, but the idea of moral philosophy as a core part of compulsory education seems unlikely to get much traction any time soon. Besides, in an already crowded curriculum, do we really have time for moral philosophy? But intractable moral problems don’t go away just because we no longer agree how to deal with them. So, what sort of things should we be teaching if we wanted to foster “ethical literacy”? What follows is in no way meant to be definitive. 1. 2. 3. 4. This is an easy trap to fall into. 5. Why?

A Quest for Truth: A List of the Top 8 Unbiased News Sources For anyone interested in things like politics, society, religion, etc., it is often difficult to accept that the information we are receiving might be coming from biased sources. We all like to "Every man is entitled to his own opinion... but not his own facts!" hold faith in the idea that the journalists we look to for insight about the world around us are presenting nothing more than neutral, hard-hitting facts. Moreover, we, as humans, seem to naturally default to those areas that we find comfort in—places of camaraderie, communion, self-affirmation and self-improvement. What I’m saying here isn’t really a secret. Wikinews Wikinews is perhaps one of the best places to find original and unbiased news stories. AlterNetAlterNet is one of my favorite online news sources. The Real News The Real News is another one of my favorites. Reuters Reuters, an international news agency stationed in London, is so dedicated to journalistic objectivity that they sometimes receive criticism for it.

opinionator.blogs.nytimes.com/2013/03/03/was-wittgenstein-right/?_php=true&_type=blogs&_r=0... 6 Quick Ways to Spot Fake News The spectrum of less-than-credible links posted to social media sites is vast. In addition to deliberately written fake news stories (often somewhat inaccurately tagged as “satire”), the online world abounds with articles that are based on exaggerated, misconstrued, manipulated, misrepresented, or outright deceptive premises. It’s fair to say that the majority of users on social media sites wish to share interesting, funny, compelling, unique, or otherwise discussion-worthy material without having to run full-scale fact checks on everything. It’s also reasonable to observe that every so often, not-so-trustworthy information will sneak into posts despite the best efforts and intentions of social media users. However, some common elements help identify shaky stories and poorly-sourced claims. Is a particularly outrage-inducing claim suddenly taking over your news feed, with many folks sharing the same link? The Echo Chamber

“Could a Quantum Computer Have Subjective Experience?” Author’s Note: Below is the prepared version of a talk that I gave two weeks ago at the workshop Quantum Foundations of a Classical Universe, which was held at IBM’s TJ Watson Research Center in Yorktown Heights, NY. My talk is for entertainment purposes only; it should not be taken seriously by anyone. If you reply in a way that makes clear you did take it seriously (“I’m shocked and outraged that someone who dares to call himself a scientist would … [blah blah]“), I will log your IP address, hunt you down at night, and force you to put forward an account of consciousness and decoherence that deals with all the paradoxes discussed below—and then reply at length to all criticisms of your account. If you’d like to see titles, abstracts, and slides for all the talks from the workshop—including by Charles Bennett, Sean Carroll, James Hartle, Adrian Kent, Stefan Leichenauer, Ken Olum, Don Page, Jason Pollack, Jess Riedel, Mark Srednicki, Wojciech Zurek, and Michael Zwolak—click here.

"One of their principle claims is that a language... Wittgenstein’s forgotten lesson Ludwig Wittgenstein is regarded by many, including myself, as the greatest philosopher of this century. His two great works, Tractatus Logico-Philosophicus (1921) and Philosophical Investigations (published posthumously in 1953) have done much to shape subsequent developments in philosophy, especially in the analytic tradition. His charismatic personality has fascinated artists, playwrights, poets, novelists, musicians and even movie-makers, so that his fame has spread far beyond the confines of academic life. And yet in a sense Wittgenstein’s thought has made very little impression on the intellectual life of this century. As he himself realised, his style of thinking is at odds with the style that dominates our present era. His work is opposed, as he once put it, to “the spirit which informs the vast stream of European and American civilisation in which all of us stand.” Scientism takes many forms. Well, you might ask, what other kind is there? All this may sound trivially true.