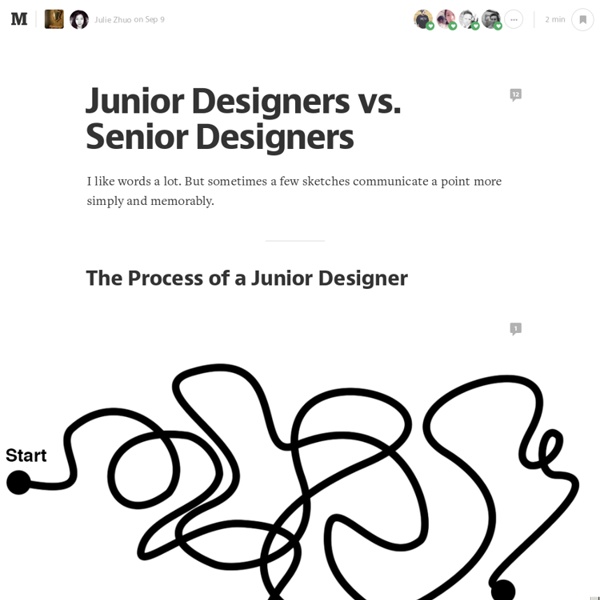 The 5 Most Common Mistakes in Design — The Year of the Looking Glass There’s no learning without mistakes. And I’ve done the following (as well as seen the following done) too many times to count. Luckily, there’s this thing called the “Internet” and this medium called an “article” that lets us point at and talk about these mistakes behind their backs, in the hopes that by bullying them into the spotlight, it’ll be harder for them to slink around, wasting our time and steering us towards no-good solutions. 1.

See The Workspaces Of 14 Leading Creative Minds “With fashion, people often associate it with marketing, and they forget the other side of it, which is the creators,” says Todd Selby, a photographer and writer who’s spent the past three years interviewing fashion designers. “Fashion is filled with so many passionate people that have a really unique vision and their own take on creativity.” That flood of creativity is the subject of Selby’s third and newest book The Fashionable Selby. As in his previous books The Selby is in Your Place and Edible Selby, Selby scouts out wildly creative minds and photographs them in their work environments. He also has them fill out by hand his own (also hand-written) Q&As, making the books feel like scrapbooks about the creative process. After covering culinary creators in Edible Selby, he decided to pay homage to his connections in the fashion industry.

Never Ask What They Want — 3 Better Questions to Ask in User Interviews — User Research The first rule of user research: never ask anyone what they want. — Erika Hall, Just Enough Research I rave about user interviews. They’re cheap (see: free), potent (you get more than what you ask for), and efficient (you only really need to talk to five people). Death of the game design document Jagex's James Sweatman on why central design documents don't always work, and the alternatives available It has been called many things over the years – GDD, Design Bible, Game Overview Document. Regardless of title, they all describe one thing; the living design document for a video game. The GDD has been a pillar of design direction for decades, providing countless developers and artists a singular vision for a game. Sounds great right? Who wouldn't want one place to store everything there is to know about a game?

How To De-Urgent Your Life One common misconception about design is that it's all about finding solutions to problems, as if they were math equations. But the best design thinking always starts by asking "why" rather than focusing on "how." That's what our latest advice-seeker seems to be in need of--so let's help him out: "I hate being late to things. Factors That Can Augment Apple Watch App Design Now, when the Apple Watch is expected to be unveiled in the beginning of the year 2015, you probably would like to reap the benefits of this highly anticipated wearable by creating a Watch app. Though, the WatchKit SDK has been launched by the Apple, but still you will need to consider certain designing constraints while developing an Apple Watch app. This is because, the conventions for the Apple Watch apps won’t be the same as that for the tablet and Smartphones app. Therefore, it would be worth pondering into the hardware and software constraints beforehand to deliver a remarkable application.

How Google Unified Its Products With A Humble Index Card If you hadn’t noticed, every Google service has been trending toward a certain understated elegance. The company’s infamous era of championing 41 shades of blue is long over, as the company has learned to embrace clean lines, airy typography, and liberal white space across their platforms. But amidst implementing these long-established good design practices, Google rediscovered an old idea: index cards. Just like index and business cards of yore (or at least the late '90s), Google’s cards are plain, white rectangles peppered with nothing more than a little bit of type and maybe a photo. Are cards the epitome of flat modernism, or are they subconscious skeuomorphism? Even Google’s designers debated this point when I posed the question.

4 Little-Known Reasons Martin Luther King Was An Amazing Leader, Human Martin Luther King Jr. seems more legend than man. But if we peer into Dr. King's life, we can see that he was more and less than myth: a person with interior complexity and exterior grace beyond what a textbook can tell you. You Can Teach Someone to Be More Creative Photo by Andrew Nguyen Though our inspiration levels fluctuate from time to time, we all differ in our baseline levels of creativity. For instance, it is safe to assume that John Coltrane was more creative than Justin Bieber, and that the creative talent of Leonardo Da Vinci exceeded that of George W.