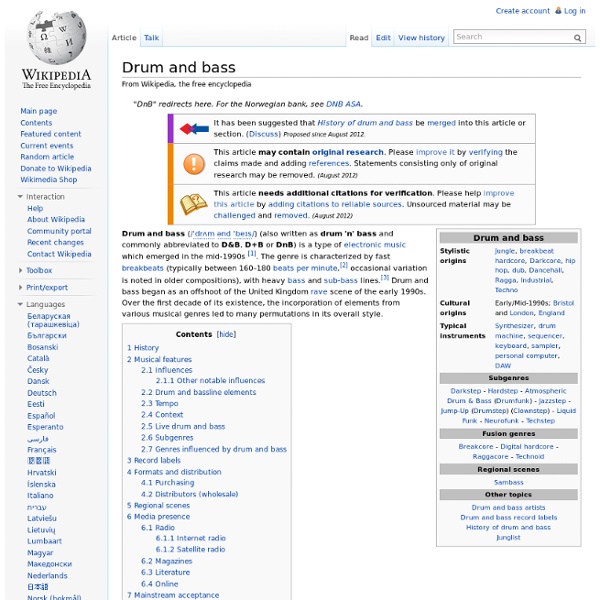 History[edit] In the late 1980s and early 1990s, a growing nightclub and overnight outdoor event culture gave birth to a new electronic music style called rave music, which, much like hip-hop, combined sampled syncopated beats or breakbeats, other samples from a wide range of different musical genres and, occasionally, samples of music, dialogue and effects from films and television programmes. But rave music tended to feature stronger bass sounds and a faster tempo (127 to over 140) beats per minute (BPM) than that of early house music. This subgenre was known as "hardcore" rave but from as early as 1991, some musical tracks made up of these high-tempo break beats, with heavy basslines and samples of older Jamaican music, were referred to as "jungle techno", a genre influenced by Jack Smooth and Basement Records, and later just "jungle", which became recognised as a separate musical genre popular at raves and on pirate radio in Britain. Musical features[edit] Influences[edit] Tempo[edit]

Minimal techno Origins[edit] Robert Hood describes the situation in the early 1990s as one where techno had become too "ravey", with increasing tempos leading to the emergence of gabber. Such trends saw the demise of the soul infused techno that typified the original Detroit sound. Robert Hood has noted that he and Daniel Bell both realized something was missing from techno in the post-rave era, and saw that an important feature of the original techno sound has been lost. The minimal techno sound that emerged at this time has been defined by Robert Hood as: "a basic stripped down, raw sound. In Audio Culture: Readings in Modern Music (2004), music journalist Philip Sherburne states that, like most contemporary electronic dance music, minimal techno has its roots in the landmark works of pioneers such as Kraftwerk and Detroit Techno's Derrick May and Juan Atkins. Style[edit] The average tempo of a minimal techno track is between 125 and 130 beats per minute. Development[edit] See also[edit]