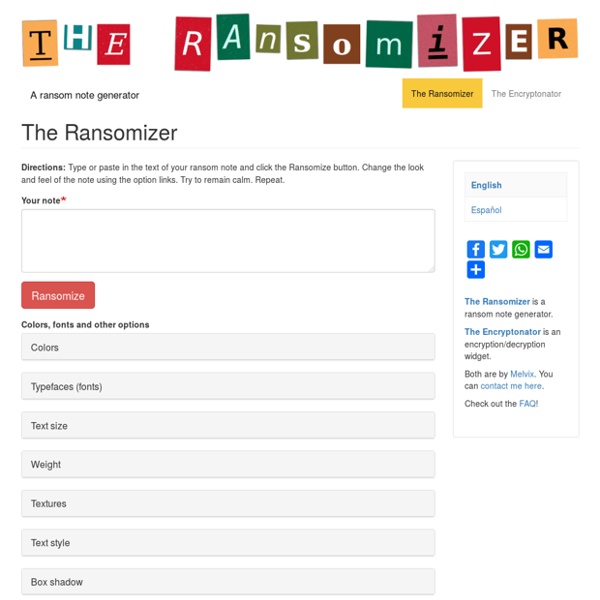 Animated GIF Maker Online GIF maker GIF maker allows you to instantly create your animated GIFs by combining separated image files as frames. Produced GIFs are of high quality and free of watermarks or attribution, making this tool ideal for developers and content creators. To make a GIF, you can upload a sequence of GIF, JPG, PNG, BMP, TIFF, HEIC, AVIF, and other types of images, ZIP archive containing images, and even mix different formats and sizes - they will be converted automatically. You can also upload animated GIF, WebP, or APNG images, they will be split and delay times preserved. Bloggif : Créez un portrait Pop art gratuitement My creations It seems that you use ad blocker! Bloggif is an artistic creation space funded primarily by advertising. To make this message disappear, please deactivate your ad blocker for our site. To unblock Bloggif in your ad blocker: 1.

Trading Card: Turn your photos into trading cards! Tons of fun stuff... Give one of our toys a spin! Calendar, Jigsaw, Magazine Cover, Framer, Pop Art Poster, Trading Card, Motivator, Bead Art, Mat, Hockneyizer, Lolcat Generator, Map Maker, Color Palette Generator, Wallpaper, Mosaic Maker, Badge Maker, Cube, Billboard, Movie Poster, Pocket Album, FX, Photobooth, CD Cover, I know, right? Text to mp3 Converter Morse Resource Resources related to Morse Code and Amateur Radio Site Navigation HomeMorse Code GeneratorsDaily Quote mp3 filesMorse Code PodcastsMorse Code LinksWeblog: Latest News Question-able Material Many students on my caseload have language difficulties impacting their ability to answer simple questions — a deficit that has the potential for considerable effects on a student’s ability to perform successfully in their educational environment. Think about a typical classroom activity, and the types of things a teacher might say…odds are pretty good that a majority of a teacher’s utterances involve a simple or higher level wh question word (what, where, who, when, why, how, what if?) Reading comprehension is especially dependent on these powerful words (Who is the main character?

9 Websites For Non Copyrighted Music In this article, you’re going to discover the best sources for non copyrighted music. You’ll be able to use the music in your social media videos, livestreams and so much more. Want to know the best part? The majority of these non copyrighted music sites allow users to utilise their music for free. You’ll just need to include a small line of credit in the description. So, without further ado, let’s dive right in. Font Changer Online (□□□□ □□□ □□□□□ □□□□□) As you've probably noticed by now, this translator lets you change your font using Unicode symbols. You can use it to change fonts on your Instagram bio, change the fonts in your Tweets or Twitter bio - you can even change the font in your Facebook posts to make them stand out more! It's the future, people. This is a duplicate of my Fancy Text Generator translator because people use a million different search terms to try and find things that help them generate weird Unicode symbols to represent their text. So hopefully this covers a decent chunk of searchers who missed my other translator.

Secret Postcard Decoder : 4 Steps (with Pictures) - Instructables This paper cipher works by filtering out (or omitting) a portion of the plaintext to reveal the secret message (ciphertext). It may sound complicated, but it's easy once you see how it works. I chose to make my cipher sophisticated and use all four alignments of my card (top/bottom facing up, and top/bottom facing down) ∴ four ciphers will be created from one sheet of cardstock. You can create more or less ciphers depending on the complexity of the message you want to send. Start by measuring the width and height of the space you want to write your message. Transfer these measurements to your cardstock, creating a boundary box for your cipher to fit.

Morse Code Translator Text to Morse Just type letters, numbers and punctuation into the top box and the Morse code will appear in the bottom box with a "#" if the character cannot be translated. If you want to translate prosigns, enter them as for instance and tick the "Use prosigns" checkbox in the advanced controls. This is not a great tool for learning Morse code as looking at the dots and dashes does not help. Instead, try the CWOps Morse Trainer. Morse to Text The pronunciation of S at the end of plural nouns, verbs in third person and as a part of the possessive case sometimes causes problems for non-native speakers because it can be pronounced in three different ways: / ɪz /, / s / or / z /. (Note: whenever you see letters or symbols between two slash marks (/ /), it refers to the pronunciation of that letter or sound) The pronunciation depends on the last sound of the verb or noun which is usually a consonant. Before we learn the difference ways to pronounce the final S, we must first know what voiced and voiceless consonants are as well as sibilant sounds: Voiced Consonants vs. Voiceless Consonants