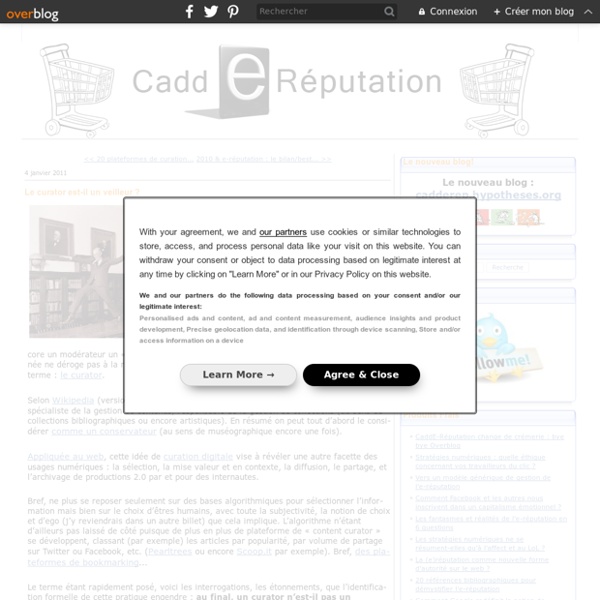 10 Tips To Hosting Better Events with Social Media Attending those great events over the last week inspired me to share few ways to use social media to spice up your own events. Read on for the goods. Spread the Word Conservation peut créer un instantané de notre vie numérique Posted by Tom Foremski - March 17, 2011 As our lives become increasingly digital curation tools can provide a good way to document our activities, capturing a snapshot of key events and moments. For example, the South by South West Interactive conference that is winding down in Austin, Texas attracted a lot of people, sharing lots of ideas, conversations, product launches, and more. Overwhelmed? Welcome the Age of Curation Forrester Research analyst Sarah Rotman Epps coined a phrase Friday for something many have been talking about since Apple launched the iPad about six weeks ago. “Curated computing” refers to the way Apple staff examines each piece of software written for iPhone OS devices before allowing it into (or blocking it from) the App Store. Epps is almost certainly not among the first 10,000 people on the planet to observe that the iPhone OS does not allow users to install whatever programs they wish, unless the devices are jailbroken.

How Consumers Interact with Brands on Social Networks The social networking audience in the US has reached critical mass. eMarketer estimates that 57.5% of all US Internet users, or 127 million people, will use a social network at least once a month in 2010. By 2014, nearly two-thirds of Internet users will be on board. Marketers have been chasing this audience for several years, but the question remains: Do consumers notice, or care? Est-Conservation du contenu de bâtisseur communautaire neuf? Content curation has drawn my interest. I was at a tech conference last week and saw a couple of pretty cool applications for curating content. Setting a side the debate of right or wrong, these new content curation tools will make their mark. Content curation, which involves human filtering and organizing is much different than content aggregation.

Breure The journal article is still the basis of scholarly communication. This genre, however, largely adheres to the rules of the printed publication and does not meet the requirements of this age of digital Web publishing. Today we do not need to restrict ourselves any longer to communicating the results of the research process only. We can also allow readers to inspect the underlying data online, to publish their own comments and, using a variety of multimedia content, to be witness to intermediary stages of the scientific discovery process.

Net Gen and the future of social media marketing I saw Don Tapscott speak at SXSW and was inspired to read his excellent book Grown Up Digital . Through extensive research, he identified the new norms and expectations of the “Net Gens,” the first generation to grow up entirely digital. How has this changed their outlook, their lifestyle, and their expectations of society? Content curation: Is it strategic syndication or simply saturation? April 29, 2011 Online news consumption surpassed newspapers for the first time last year according to Pew Research Center’s 2011 State of the News Media report. Forty-six percent of respondents access news online at least three times weekly, compared to 40 percent from newspapers. Pew also finds that 47 percent of Americans access local news via mobile devices. These stats may not be revelations to informed communicators, but they illustrate how the volume of online information is rapidly expanding — and Pew’s data only measures editorial content. Even Google search algorithms are challenged to provide relevant results from such an enormous pool of possibilities.

Why journalists should think twice about Facebook Facebook's journalism panel: O'Brien, Milian, Zaleski, McClure (photo by George Kelly) At Facebook last Wednesday night, a panel of four journalists — Laura McClure of Mother Jones, Katharine Zaleski of the Washington Post, Chris O’Brien of the San Jose Mercury News, and CNN tech writer Mark Milian — talked about how they use Facebook as a tool for journalism. What they said was smart. I’d probably do most of the same things were I in their shoes. But I had a question for them, and I didn’t get called on to ask it, so I’m going to ask it here. The question goes like this: Everything that journalists are doing on Facebook today — engaging readers in conversation, soliciting sources, polling users, posting “behind the story” material — is stuff they could just as easily do on their own websites.

What Is Planking? This article titled “Planking: a brief history” was written by Tom Meltzer, for The Guardian on Monday 16th May 2011 19.59 UTC The rules are simple: you must lie face down, palms flat against your sides, with your feet together and pointing at the floor. Points are awarded for an original location and for the number of spectators and participants involved. You must, of course, have somebody take a photo. Without a photo, you’re just a person lying down. On doing digital history – thoughts for new grad students « Electric Archaeology: Digital Media for Learning and Research I’ve been asked this morning to talk to our new cohort of MA students on ‘doing digital history’. I thought about how I might do this. Typically, I’d throw together a powerpoint and begin talking about various tools, trends in the field, try to get a sense of what people are interested in, tailoring my comments to those topics. Today though, I’m trying a different approach.

UCL Centre for Digital Humanities » Blog Archive » QRator in the Horizon Report: Museum Edition By Claire Ross, on 19 November 2011 The QRator project , a collaboration between UCLDH, CASA and UCL Museums , funded by the Beacon for Public Engagement , has been chosen for inclusion in the 2011 Museum edition of the Horizon report, produced by the New Media Consortium . The Horizon Report is an international report about leading museum technologies. The report’s main aim is to identify and describe emerging technologies which will have a large impact over the next five years. The 2011 edition highlights six emerging technologies or practices that are going to have an impact on the sector and breaks them down into three distinct time frames or horizons. Here are the Technologies to watch: