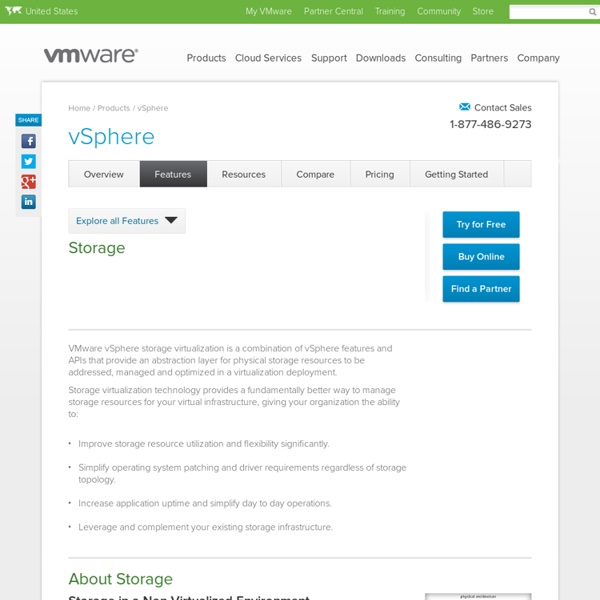 A virtual machine is stored as a set of files in its own directory in a datastore, which is a logical container, like a file system, that hides the specifics of each storage device and provides a uniform model for storing virtual machine files. Datastores can also be used for storing ISO images, virtual machine templates and floppy images. They can be backed by either a Virtual Machine File System (VMFS) or a Network File System (NFS), depending on the type of storage. A VMFS datastore can be deployed on a SCSI-based local or networked storage device, while an NFS datastore can be deployed on a NAS device.

VMware Storage and Software-defined Storage (SDS) Solutions Blog Posts Oregon State University, a public institution with more than 26,000 students and growing VDI workloads wanted a high performance storage tier for their VDI environment. However, they wanted the solution to be up and running before the school summer session began, along with being easy to operate and scale on an on-going basis, without requiring large upfront investments. Continue reading Welcome to the next installment of our vSphere PowerCLI 5.8 walkthrough series of the new cmdlets for vSphere Storage Policy Based Management. So far we have seen: Introduction to vSphere Storage Policies Creating vSphere Storage PoliciesAssociating vSphere Storage Policies VMware storage: SAN configuration basics VMware storage entails more than simply mapping a logical unit number (LUN) to a physical server. VMware’s vSphere enables system administrators to create multiple virtual servers on a single physical server chassis. The underlying hypervisor, vSphere ESXi, can use both internal and external storage devices for guest virtual machines. In this article we will discuss the basics of using storage area network (SAN) storage on vSphere and the factors administrators should consider when planning a shared SAN storage deployment. VMware storage: SAN basics

Choosing an Open Storage Operating System It is becoming increasingly common to forgo traditional, proprietary storage devices, both NAS and SAN, and instead using off the shelf hardware and installing a storage operating system on it for, what many call, “do it yourself” storage servers. This, of course, is a misnomer since no one calls a normal file server “do it yourself” just because you installed Windows yourself. Storage has a lot of myth and legend swirling around it and people often panic when the they think of installing Windows and calling it NAS rather than calling it a file server. So, if it makes you feel better, use terms like file server or storage server rather than NAS and SAN – problem solved.

Virtual Blocks For those of you have been following this thread for a while, you know we’re in the midst of head-to-head performance testing on two identical clusters: one running VSAN, the other running Nutanix. Recently, we’ve updated the Nutanix cluster to vSphere 6 and 4.1.3 — however, no differences have been observed performance since the change. Up to now, we’ve only been able to share our VSAN results. VMware's Virtual SAN Threatens Traditional Data Storage Models VMware has launched the final part of its software defined data center puzzle: a virtual SAN product called Virtual SAN. The product has been in beta testing for the last six months, with around 12,000 customers, but there were still plenty of surprise announcements made at the launch event on March 6. The biggest of these was the maximum size of its Virtual SAN. Previously VMware had said that this would be 8 server nodes, and then 16.

Review: VMware Virtual SAN turns storage inside-out Convergence of compute and storage is all the rage in the virtualization market these days. You see it in Microsoft's Windows Server 2012 R2 with Hyper-V and Storage Spaces. You see it in third-party platforms such as Nutanix. And you see it in VMware's vSphere flagship with the addition of Virtual SAN, a new capability built into the ESXi hypervisor that turns the direct-attached storage in vSphere cluster nodes into highly available, high-performance shared storage.

Converged Storage for VMware Imagine what you can achieve by combining the power of VMware vSphere with storage platforms designed to eliminate the challenges of server and client virtualization. HP’s next generation of Converged Storage solutions are designed to enhance the benefits of VMware vSphere, VMware View, and VMware vCloud Solutions. With HP storage supporting your VMware deployments, you are able to: Optimize VM density, availability and business continuity Simplify provisioning and management with less storage and vSphere complexity Save on storage by increasing capacity utilization and efficiency HP Converged Storage for VMware Environments HP 3PAR StoreServ Storage—delivers best-in-class, hardware-assisted integration with VMware vSphere along with guarantees to double your VM density and cut your capacity requirements in half. HP StoreOnce Backup—reduces backup data in vSphere environments by up to 20x by eliminating duplicated data.

Program: Information Systems and Operations Management - University of Florida - Acalog ACMS™ The Department of Information Systems & Operations Management offers graduate courses leading to the Master of Science in Information Systems and Operations Management (M.S.ISOM); the Ph.D. degree in Business Administration; and a concentration in the Master of Business Administration (M.B.A.) program. Minimum requirements for these degrees are available in the Graduate Degrees section of this catalog. Master of Science: The M.S.ISOM program provides computing, analytical, and application skills to be used in a business setting. The primary areas of emphasis in the M.S.ISOM program are business intelligence and analystics, information systems/information technology, and supply chain management. Requirements span traditional academic disciplines to produce a multiple-discipline focus. Typical positions for graduates include decision support specialist, information systems specialist, systems analyst, and logistic support specialist.