Texas, and the death penalty 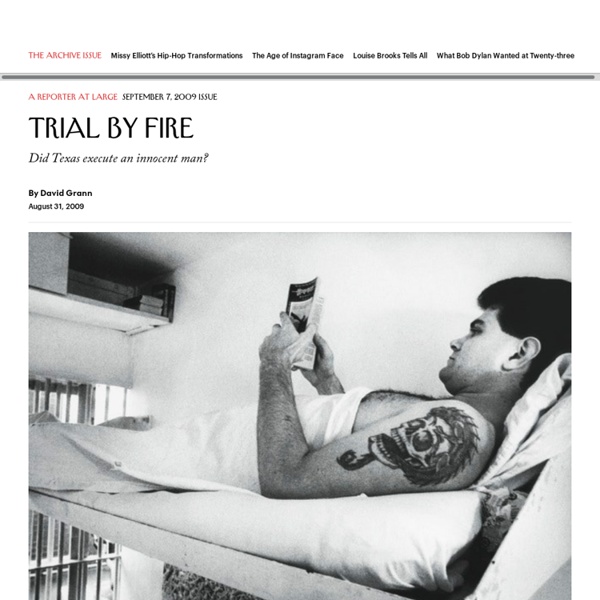 Willingham was charged with murder. Because there were multiple victims, he was eligible for the death penalty, under Texas law. Unlike many other prosecutors in the state, Jackson, who had ambitions of becoming a judge, was personally opposed to capital punishment. “I don’t think it’s effective in deterring criminals,” he told me. “I just don’t think it works.” He also considered it wasteful: because of the expense of litigation and the appeals process, it costs, on average, $2.3 million to execute a prisoner in Texas—about three times the cost of incarcerating someone for forty years. Willingham couldn’t afford to hire lawyers, and was assigned two by the state: David Martin, a former state trooper, and Robert Dunn, a local defense attorney who represented everyone from alleged murderers to spouses in divorce cases—a “Jack-of-all-trades,” as he calls himself. Willingham’s lawyers were equally pleased. His parents went to see their son in jail. Willingham was implacable.

Woman who recorded Massachusetts police beating charged with illegal wiretapping Michaelann sez, "Four Springfield Mass police officers beat Melvin Jones in 2009 and the incident was captured on videotape by a resident. Now, one of the four officers involved, who was suspended for 45 days, is seeking a criminal complaint against the woman for illegal wiretapping. This article has a link to the original video, where the woman doing the taping pretty much said everything I would have said-- "strong language." The woman will be in court on Wednesday and some members of my group, Arise for Social Justice, will be there to support her." Police Sgt. Videographer of alleged Melvin Jones beating could be charged with illegal wiretapping (Thanks, Michaelann!)

Skip Hollandsworth of Texas Monthly: His best true crime pieces, from Longform.org Kevin Winter/Getty Images. Every weekend, Longform shares a collection of great stories from its archive with Slate. For daily picks of new and classic nonfiction, check out Longform or follow @longform on Twitter. Greetings from Austin! Three Dallas prostitutes were found dead in as many months. “Dutifully, Charles spent hours on his taxidermy courses, stuffing and mounting his birds, making them look as life-like as possible. “Yet Delle wouldn’t let him. "They were, indeed, Charles Albright’s first works of art, just as the mail-order booklet had promised. “The birds had no eyes. How two love-struck, type-A high-schoolers almost got away with murder: "As their investigation began, the detectives did conduct a perfunctory interview with David Graham, but they were so certain he was not involved that they didn’t even try to give him a polygraph test. “In fact, throughout last fall, a stream of mostly female well-wishers visited Bernie in jail, bringing him cakes and pies.

A Decade After 9/11: We Are What We Loathe - Chris Hedges' Columns A Decade After 9/11: We Are What We Loathe Posted on Sep 10, 2011 By Chris Hedges I arrived in Times Square around 9:30 on the morning of Sept. 11, 2001. A large crowd was transfixed by the huge Jumbotron screens. The south tower went down around 10 a.m. with a guttural roar. I headed toward the spot where the towers once stood, passing dazed, ashen and speechless groups of police officers and firefighters. Scores of people, perhaps more than 200, pushed through the smoke and heat to jump to their deaths from windows that had broken or they had smashed. The images of the “jumpers” proved too gruesome for the TV networks. The “jumpers” did not fit into the myth the nation demanded. The shock of 9/11, however, demanded images and stories of resilience, redemption, heroism, courage, self-sacrifice and generosity, not collective suicide in the face of overwhelming hopelessness and despair. Reporters in moments of crisis become clinicians. There would soon, however, be another reaction.

US police smash camera for recording killing - Features A picture may be worth 1,000 words, but Narces Benoit's decision to videotape a shooting by Miami police landed him in jail after officers smashed his cell-phone camera. It was 4am on May 30 when Benoit and his girlfriend Erika Davis saw officers firing dozens of bullets into a car driven by Raymond Herisse, a suspect who hit a police officer and other vehicles while driving recklessly. Herisse died in the hail of lead, and four bystanders also suffered gunshot wounds, the Miami Herald newspaper reported. Police noticed the man filming the shooting and an officer jumped into his truck, and put a pistol to his head, Benoit said. The cop yelled: "Wanna be a [expletive] paparazzi?" "My phone was smashed, he stepped on it, handcuffed me," the 35-year-old car stereo technician told CNN. Legal issues "There are two questions at play here that need to be separated," said Eugene Volokh, a professor of law at the University of California. Benoit and Davis have hired a lawyer.

The Norumbega Inn - Camden - United States Aid to Israel no longer a sacred cow For the first time in memory, if not ever, a highly respected mainstream columnist is calling on the United States to cut aid to Israel. Writing in the Washington Post, Pulitzer Prize-winning reporter and columnist Walter Pincus, says, "it is time to examine the funding the United States provides to Israel". Aid to Israel is virtually the only programme - domestic or foreign - that is exempt from every budget-cutting proposal pending in Congress. No matter that our own military is facing major cuts along with Medicare, cancer research and hundreds of other programmes, Israel's friends in Congress in both parties make sure that aid to Israel is protected at current levels. Back when I was a congressional staffer, I was part of the process by which aid to Israel was secured. Members of the respective appropriations committees sent "wish lists" to the chair of their committee detailing which programmes they each wanted funded and by what amounts. Exceptionalism Lobby as a 'night flower'

100 Greatest Horror Films of All Time The common claim of the horror film is that it allows us to vicariously play with our fear of death. Inarguable, really, but that's also too easy, as one doesn't have to look too far into a genre often preoccupied with offering simulations of death to conclude that the genre in question is about death. That's akin to saying that all an apple ever really symbolizes is an apple, and that symbols and subtexts essentially don't exist. A more interesting question: Why do we flock to films that revel in what is, in all likelihood, our greatest fear? And why is death our greatest fear? A startling commonality emerges if you look over the following films in short succession that's revelatory of the entire horror genre: These works aren't about the fear of dying, but the fear of dying alone, a subtlety that cuts to the bone of our fear of death anyway—of a life unlived. Editor's Note: Click here for a list of the films that came in #'s 101—200. Inside (2007) House (1977) Alice, Sweet Alice (1976)

War Costs True Crime: How a Mysterious Beaumont, Texas, Murder Was Solved The corpse at the Eleganté Hotel stymied the Beaumont, Texas, police. They could find no motive for the killing of popular oil-and-gas man Greg Fleniken—and no explanation for how he had received his strange internal injuries. Bent on tracking down his killer, Fleniken’s widow, Susie, turned to private investigator Ken Brennan, the subject of a previous Vanity Fair story. Once again, as Mark Bowden reports, it was Brennan’s sleuthing that cracked the case. Greg Fleniken traveled light and lived tidy. Most evenings he never left the room. He missed the ending. Greg was accustomed to solitary nights. That Wednesday night, watching his movie, Greg got an e-mail from his wife, Susie, shortly after seven. At some point during the loud, computer-generated showdown at the end of the film, amid all the fake violence, Greg was struck from nowhere with a very real and shattering blow. He was probably dead by the time his face hit the green rug. A “Natural-Causes Thing” Dr. Whodunit? Weeks went by.

Pentagon Wants a Social Media Propaganda Machine | Danger Room You don’t need to have 5,000 friends of Facebook to know that social media can have a notorious mix of rumor, gossip and just plain disinformation. The Pentagon is looking to build a tool to sniff out social media propaganda campaigns and spit some counter-spin right back at it. On Thursday, Defense Department extreme technology arm Darpa unveiled its Social Media in Strategic Communication (SMISC) program. It’s an attempt to get better at both detecting and conducting propaganda campaigns on social media. This is more than just checking the trending topics on Twitter. Not all memes, of course. More specifically, SMISC needs to be able to seek out “persuasion campaign structures and influence operations” developing across the social sphere. Of course, SMISC won’t be content to just to hang back and monitor social media trends in strategic locations. Darpa’s announcement talks about using SMISC “the environment in which [the military] operates” and where it “conducts operations.”

The Greatest Hits of 1958 (US) Here they are, the absolutely greatest hits from the history of popular music in the USA. The very best music. The Year is 1958 Paul Anka - You Are My Destiny - 02-58 - ABC ParamountThe Applejacks - Mexican Hat Rock - 11-58 - CameoFrankie Avalon - Dede Dinah - 02-58 - ChancellorFrankie Avalon - Ginger Bread - 08-58 - ChancellorChuck Berry - Sweet Little Sixteen - 03-58 - ChessChuck Berry - Johnny B. Herb's Country Site Back to Main Get to know MORE about the U.S. and UK top 20 charts from 1954 up to 'the present day' (ie. Obama Health Care Law Reaches Supreme Court, With Over Five Hours Of Oral Argument Planned WASHINGTON -- In an order released on Monday morning, the Supreme Court announced that it will hear more than five hours of oral argument in the challenges to the Affordable Care Act brought by 26 states and several private parties. The order indicates the gravity with which the justices view the health care cases, as the Court rarely allots more than an hour to for argument in each case it hears. Within those five-plus hours, the justices divided the time into four separate arguments to address the various questions raised in petitions from the Department of Justice, the 26 states and the National Federation of Independent Business. The longest argument, set for two hours, will consider whether Congress had the power under Article 1 of the Constitution to enact the Patient Protection and Affordable Care Act. The cases granted Monday come up from the U.S. Majorities on the 6th Circuit and the D.C. Loading Slideshow Round 1: The District Courts DivideU.S.

VRBO - Franklin NH Vacation Rentals This property allows you to book online with a credit card. After submitting a reservation request, the owner or manager has 24 hours to accept, at which time your card will be charged and you will receive an email confirmation Map Data Map data ©2015 Google Map Satellite