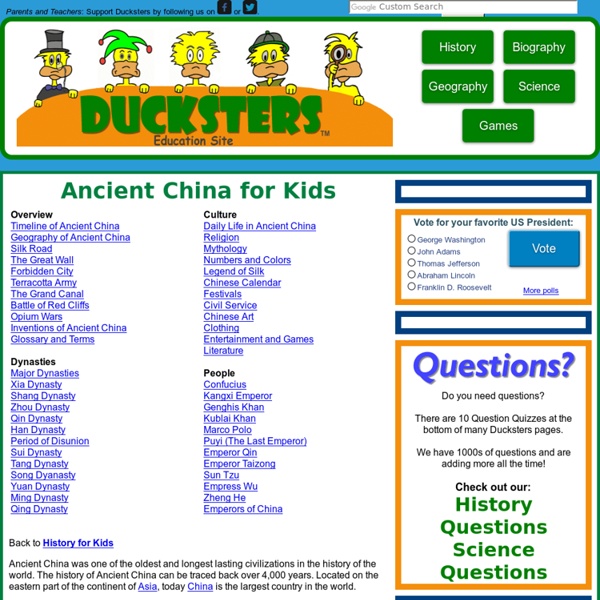 Back to History for Kids Ancient China was one of the oldest and longest lasting civilizations in the history of the world. The history of Ancient China can be traced back over 4,000 years. Located on the eastern part of the continent of Asia, today China is the largest country in the world. Great Wall of China by Mark Grant Dynasties Throughout most of China's history it was ruled by powerful families called dynasties. Empire Ancient China also boasts the longest lasting empire in history. Government In early times the lands were ruled by the feudal system where lords owned the lands and farmers tended the fields. Art, Culture, and Religion Art, culture, and religion were often tied together. Mongols The great enemy of the Chinese was the Mongols who lived to the north. Fun Facts about Ancient China The Last Emperor of China, Puyi, became ruler when he was only 3 years old. For more information: Go here to test your knowledge with a Ancient China crossword puzzle or word search.

China China is a country in East Asia whose culture is considered the oldest, still extant, in the world. The name `China’ comes from the Sanskrit Cina (derived from the name of the Chinese Qin Dynasty, pronounced `Chin’) which was translated as `Cin’ by the Persians and seems to have become popularized through trade along the Silk Road from China to the rest of the world. The Romans and the Greeks knew the country as `Seres’, “the land where silk comes from”. The name `China’ does not appear in print in the west until 1516 CE in Barbosa’s journals narrating his travels in the east (though the Europeans had long known of China through trade via the Silk Road). Marco Polo, the famous explorer who familiarized China to Europe in the 13th century CE, referred to the land as `Cathay’.

Ancient World History : Ancient China Ancient Chinese historians knew nothing of their Neolithic forebears, whose existence was discovered by 20th-century archaeologists. Traditionally, the Chinese traced their history through many dynasties to a series of legendary rulers, like the Yellow Lord (Huang Di), who invented the key features of civilization—agriculture, the family, silk, boats, carts, bows and arrows, and the calendar. The last of these kings was Yu, and when he died the people chose his son to lead them, thus establishing the principle of hereditary, dynastic rule.

Ancient China - Ancient Civilizations for Kids East Asia also has dry areas. The Gobi Desert is found along the border between Mongolia and China. The Gobi is the 5th largest desert in the world and is also the coldest. It is common to see frost or even snow on the sand and gravel dunes. Most of western China is very dry because of the rain shadow created by the Himalaya Mountains. A rain shadow is a dry area on the leeward (opposite of windward) side of a mountainous area. The best 21 China facts for kids For many people, China is a strange and exotic place. Some facts about China may make your home country seem downright boring in contrast. Here are some China facts for kids that you may not know.

History of China for Kids - History Games and Videos History of China for Kids For many centuries China had the world's most advanced civilization. Chinese history can be traced back to around 1550 BC (Shang Dynasty). China History: Chronology, Dynasty Qin Han Tang Song Yuan Ming Qing China, one of the countries that can boast of an ancient civilization, has a long and mysterious history - almost 5,000 years of it! Like most other great civilizations of the world, China can trace her culture back to a blend of small original tribes which have expanded till they became the great country we have today. It is recorded that Yuanmou man is the oldest hominoid in China and the oldest dynasty is Xia Dynasty. From the long history of China, there emerge many eminent people that have contributed a lot to the development of the whole country and to the enrichment of her history. Among them, there are emperors like Li Shimin (emperor Taizong of the Tang), philosophers like Confucius, great patriotic poets like Qu Yuan and so on.

Ancient China - The Ancient Chinese Civilization Chinese Historical Accounts the Forbidden City, the home of the Chinese emperors until the last dynasty was overthrown in the 20th century Chinese history, until the twentieth century, was written mostly by members of the ruling scholar-official class and was meant to provide the ruler with precedents to guide or justify his policies. These accounts focused on dynastic politics and colorful court histories and included developments among the commoners only as backdrops. The historians described a Chinese political pattern of dynasties, one following another in a cycle of ascent, achievement, decay, and rebirth under a new family. Of the consistent traits identified by independent historians, a salient one has been the capacity of the Chinese to absorb the people of surrounding areas into their own civilization.

Ancient China For Kids The First Emperor › Qin Shi Huangdi became the first Emperor of China in 221 BCE. The First Emperor › The Great Wall › The Great Wall of China was built over a period of hundreds of years to protect the kingdom from raiders. The Forbidden History of Ancient China: Aryan Mummies and Hundreds of Pyramids [Hitler regarded individuals who were 6ft. 6in. and taller as being closest genetic relatives of the original proto-Aryan tribes from central Asia from which the Caucasian people and civilizations are said to have descended. Recent discoveries of hundreds of ancient mummies in Asia are forcing a re-examination of old Chinese books that describe as being of great height, with deep-set blue eyes, long noses, full beards, and red or blonde hair. The discoveries of the giant 4,000-year-old “Beauty of Loulan” and (six-foot, six-inch) “Charchan Man” support the legends about these mythical ancient Aryans.] After years of controversy and political intrigue, archaeologists using genetic testing have proven that Caucasians roamed China’s Tarim Basin thousands of years before East Asian people arrived. In historic and scientific circles the discoveries along the ancient Silk Road were on a par with finding the Egyptian mummies. Mair hopes to publish his new findings in the coming months.

History of China Chinese civilization originated in various regional centers along both the Yellow River and the Yangtze River valleys in the Neolithic era, but the Yellow River is said to be the cradle of Chinese civilization. With thousands of years of continuous history, China is one of the world's oldest civilizations.[1] The written history of China can be found as early as the Shang Dynasty (c. 1700–1046 BC),[2] although ancient historical texts such as the Records of the Grand Historian (ca. 100 BC) and Bamboo Annals assert the existence of a Xia Dynasty before the Shang.[2][3] Much of Chinese culture, literature and philosophy further developed during the Zhou Dynasty (1045–256 BC). The Zhou Dynasty began to bow to external and internal pressures in the 8th century BC, and the kingdom eventually broke apart into smaller states, beginning in the Spring and Autumn Period and reaching full expression in the Warring States period. Prehistory Paleolithic