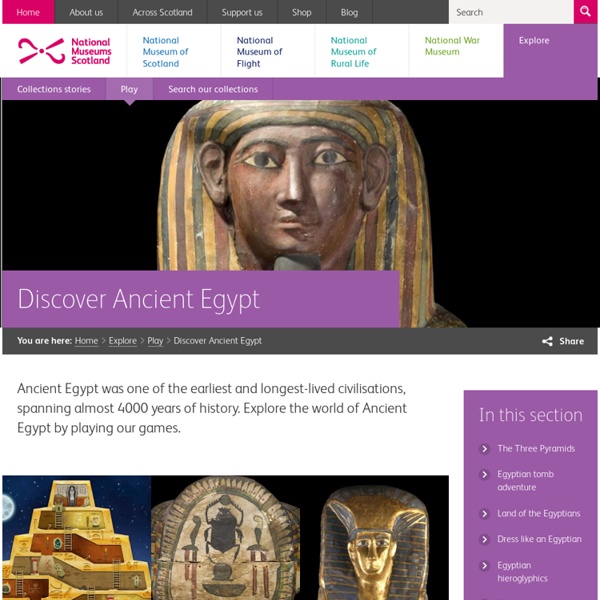 NOVA - Official Website | The Afterlife in Ancient Egypt share Posted 01.03.06 NOVA Unlike most scholars of the ancient world, Salima Ikram knows her subjects on an intimate, face-to-face basis. In this interview, Ikram, an Egyptologist at the American University in Cairo, sheds light on why mummification was practiced in ancient Egypt, what the ancients thought the afterlife would be like, and why—of some 70 million mummies made—very few remain intact today. Like most ancient Egyptians, this wife of a pharaoh died young. The allure of mummies NOVA: Why do you think people are so fascinated by mummies? Salima Ikram: Part of it is, of course, all that horror movie business. What's the allure of mummies for Egyptologists? Well, I think one reason is very basic: here we are, studying Tuthmosis III, reading his words on temple walls, and you can actually look at him! There's also a lot that we can learn from mummies about ancient disease, medical practices, technology, health, diet, as well as religious beliefs. No. Did they bury pets in their tombs?

What the Ancients Knew - Egypt Egyptian Fractions 1 Egyptian Fractions The ancient Egyptians only used fractions of the form 1/n so any other fraction had to be represented as a sum of such unit fractions and, furthermore, all the unit fractions were different! Why? Is this a better system than our present day one? In fact, it is for some tasks. This page explores some of the history and methods with puzzles and and gives you a summary of computer searches for such representations. This page has an auto-generated Content section which may take a second or two to appear. The calculators on this page also require JavaScript but you appear to have switched JavaScript off (it is disabled). 2 An Introduction to Egyptian Mathematics Some of the oldest writing in the world is on a form of paper made from papyrus reeds that grew all along the Nile river in Egypt. [The image is a link to David Joyce's site on the History of Maths at Clarke University.] So what was on them do you think? 2.1 Henry Rhind and his Papyrus scroll So what did it say? So

Ancient Egypt on a Comparative Method The Great Pyramid of Giza Pyramids of Giza, soaring above the city of Cairo, Egypt The Great Pyramid of Giza is the most substantial ancient structure in the world - and the most mysterious. According to prevailing archaeological theory - and there is absolutely no evidence to confirm this idea - the three pyramids on the Giza plateau are funerary structures of three kings of the fourth dynasty (2575 to 2465 BC). The Great Pyramid, attributed to Khufu (Cheops) is on the right of the photograph, the pyramid attributed to Khafra (Chephren) next to it, and that of Menkaura (Mycerinus) the smallest of the three. The Great Pyramid was originally 481 feet, five inches tall (146.7 meters) and measured 755 feet (230 meters) along its sides. The foolishness of the common assumption, that the Giza plateau pyramids were built and utilized by fourth Dynasty kings as funerary structures, cannot be overstated. Giza Pyramids after sunset, Egypt The building blocks of the Great Pyramid of Giza The Pyramids of Giza

Discovering Ancient Egypt Egyptian Mummies The methods of embalming, or treating the dead body, that the ancient Egyptians used is called mummification. Using special processes, the Egyptians removed all moisture from the body, leaving only a dried form that would not easily decay. It was important in their religion to preserve the dead body in as life-like a manner as possible. So successful were they that today we can view the mummified body of an Egyptian and have a good idea of what he or she looked like in life, 3000 years ago. Mummification was practiced throughout most of early Egyptian history. The earliest mummies from prehistoric times probably were accidental. Process The mummification process took seventy days. The embalmers next removed all moisture from the body. Next the wrapping began. As part of the funeral, priests performed special religious rites at the tomb's entrance. Such elaborate burial practices might suggest that the Egyptians were preoccupied with thoughts of death. But why preserve the body?

Sweet Search New clues illuminate mysteries of ancient Egyptian portraits WASHINGTON — Scientists are getting a clearer picture of how ancient Egyptians painted lifelike portraits that were buried with mummies of the depicted individuals. These paintings sharply departed from Egyptians’ previous, simpler artworks and were among the first examples of modern Western portraits, archaeologist and materials scientist Marc Walton reported February 14 at the annual meeting of the American Association for the Advancement of Science. The “mummy portraits” date to more than 2,000 years ago, when the Roman Empire controlled Egypt. Three such portraits of Roman-era Egyptians, found more than a century ago at site called Tebtunis, were created by the same artist, said Walton, of Northwestern University in Evanston, Ill. Identities of the boy and two men in the portraits are unknown. Many pigments in the portraits probably came from Greece, Walton said.

History - Ancient History in depth: The Story of the Nile