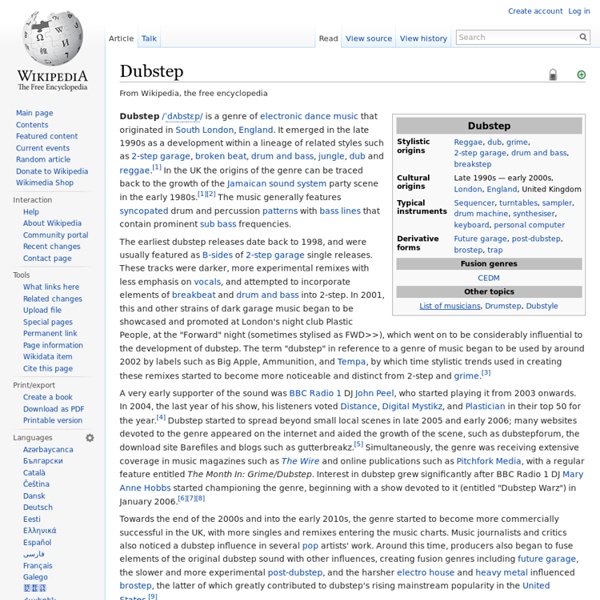 Towards the end of the 2000s and into the early 2010s, the genre started to become more commercially successful in the UK, with more singles and remixes entering the music charts. Music journalists and critics also noticed a dubstep influence in several pop artists' work. Around this time, producers also began to fuse elements of the original dubstep sound with other influences, creating fusion genres including future garage, the slower and more experimental post-dubstep, and the harsher electro house and heavy metal influenced brostep, the latter of which greatly contributed to dubstep's rising mainstream popularity in the United States.[9] Characteristics Musical score of the above recording. The music website Allmusic has described Dubstep's overall sound as "tightly coiled productions with overwhelming bass lines and reverberant drum patterns, clipped samples, and occasional vocals Rhythm Dubstep rhythms are usually syncopated, and often shuffled or incorporating tuplets. Wobble bass

Electro swing Electro swing is a musical genre combining the influence of (most commonly) vintage swing with contemporary production techniques or styles - the 'electro' part of the name. This might include house, hip hop, EDM or other predominantly computer-produced music but might also encompass anything contemporary such as scratching with an otherwise all-live band. The genre often incorporates loops, samples or melodies that deliberately reference a sound-palette (to the inclusion therefore of the dance moves and fashions) from the classic swing, jazz and big band era. Typically this is the period from the early 1930s to the late 1940s and would include music by Duke Ellington, Cab Calloway, Lionel Hampton and Benny Goodman among many others. Successful examples of the genre create a modern and dance-floor focused sound that is more readily accessible to the modern ear but that also retains the feeling of live brass and the energetic excitement of the early swing recordings.

Sneaky Mobile Ads Invade Android Phones Are you wondering how that mysterious icon ended up on your Android phone's start screen? Annoyed at the ads clogging your notification bar? You aren't alone. Thousands of Android apps now include software that shoves marketing icons onto your phone's start screen or pushes advertising into your notification bar--and many of the apps give you no warning about the ad invasion.

Football & Fried Chicken - The Garden of Eden - The Garden of Eden I am a New England Patriots fan. There, I said it. Yes, I grew up in Colorado and yes, we live in Denver now. However, I truly became a football fan when I met Rob and that was in Boston... and the Patriots won three Super Bowl Championships while I lived in Boston! Trip hop History[edit] 1990s[edit] Trip hop originated in and around the city of Bristol[5] during a time when American hip hop, dance and house music had begun to increase in popularity. French house History and influences[edit] Terms, origins and variations[edit] The term "French house" was first used in Paris in July 1987. Jean-Claude Lagrèze, a photographer of parisians' nights created a couple of "French Touch" parties at The Palace to make people discover house music. These parties were driven by DJ Laurent Garnier, Guillaume la Tortue and David Guetta.

Top 5 Causes of Accidental Death in the United States Accidents happen — and they also kill enough people to rank as the No. 1 cause of death for those ages 1 to 42, according to the National Safety Council. Accidents are the fifth-leading cause of death across all age groups, topped only by a spate of illnesses that include heart disease and cancer. And it’s not the heavy-machinery operators, high-rise window washers or electricians who most frequently succumb to fatal accidents. The vast majority of accidental deaths happen at home or in the community — not at work — with the top five causes often stemming from routine activities. 5. Choking (Approximately 2,500 deaths per year) Old Fashioned Waffles with Maple Butterscotch Syrup « Baker Bettie Well, it’s that time of year again. The time when we reflect on the past year and our accomplishments… or lack there of. It’s also the time of year when we get to start with a clean slate. Break out those resolutions and give it a better shot this year. I am no different than most.

Urban Ghosts: 9 Ghost Stations and Abandoned Subways Images: Gonioul , cc-sa-3.0 Ghost stations and abandoned subways are often considered the holy grail of urban exploration . Despite the grandeur and eerie mystery of many abandoned railway stations , it’s the hidden, lost places beneath that really capture the imagination of urban explorers . Some subway stations have been closed for so long that talk of them has become urban legend. This article examines some very real destinations, some of which haven’t been explored for generations. Abandoned subways range from shallow cut-and-cover routes to deep level subterranean platforms accessed by decaying corridors and seemingly endless stairways.

Spiced cinnamon sugar breakfast puffs « Five And Spice On the off chance that your holiday breakfast plan is not yet inscribed in stone; in case you aren’t already bound and determined to have a strata, or frittata, or sticky buns, or perhaps puffy pancakes or spoon bread; or maybe you’d like to just add some icing to your giant, decadent, multi-course holiday brunch cake; well then dear friends, may I venture a suggestion. I actually feel a bit ashamed that I’ve been holding this recipe from you for so long. It’s a recipe that may, in fact, deserve a little shouting from the rooftops. And, it’s a recipe with a history, which means stories. I didn’t know any of the stories when I first started baking the original version (this is a wholly different iteration, but we’ll get to that later), I just knew that I had the recipe copied down on an index card from my friend, and I had labeled it “breakfast puffs.”

Nu-funk Nu funk is a contemporary form of funk.[1] Since mid-1990s and further into the 2000s, a number of new bands have emerged that played original compositions intended to imitate the sound of deep funk bands. The concept usually includes using vintage musical instruments and recording equipment, as well as distribution via analogue record discs. However, an updated tighter sound is not uncommon as well. Stylistically, nu funk is somewhat close to jam bands. Tiny House, Happy Life? Imagine stepping into a house 25 times smaller than your current abode. For the average American, that would amount to 100 square feet, a space so tiny it feels like it belongs in a tree. That’s the way Jay Shafer has come home for the past decade. Shafer is considered something of a patriarch of the tiny house movement, a small but growing band of people who drastically shrink their living space in hopes of living a cheaper, less wasteful, and happier life. Shafer started building tiny houses in the late 90s, attracted to the idea of living with fewer possessions.

English Pronunciation If you can pronounce correctly every word in this poem, you will be speaking English better than 90% of the native English speakers in the world. After trying the verses, a Frenchman said he’d prefer six months of hard labour to reading six lines aloud. Dearest creature in creation, Study English pronunciation. I will teach you in my verse Sounds like corpse, corps, horse, and worse. I will keep you, Suzy, busy, Make your head with heat grow dizzy. Deep house This article is about the style of music. For the human dwelling-structure, see List of house types. Deep house is a subgenre of house music[1] that originated in the 1980s, initially fusing elements of Chicago house with 1980s jazz-funk[2] and touches of soul music.[3] The lengths of the tracks are usually around 7 and 10 minutes and lie between 120-130 bpm.