Why Flunking Exams Is Actually a Good Thing 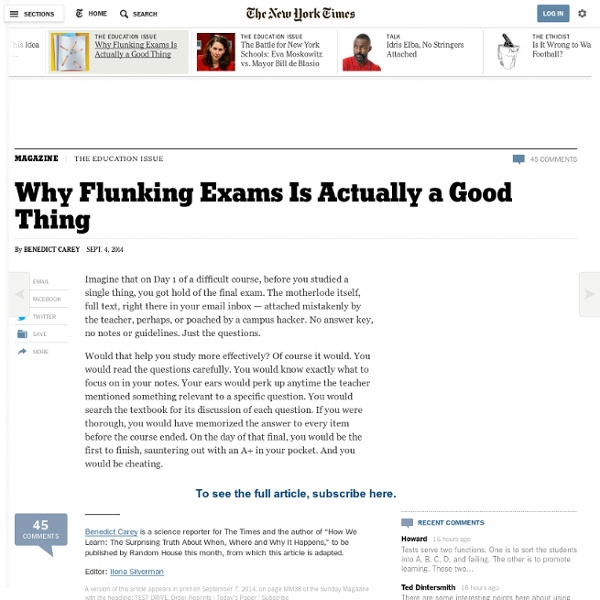 Photo Imagine that on Day 1 of a difficult course, before you studied a single thing, you got hold of the final exam. The motherlode itself, full text, right there in your email inbox — attached mistakenly by the teacher, perhaps, or poached by a campus hacker. Would that help you study more effectively? But what if, instead, you took a test on Day 1 that was just as comprehensive as the final but not a replica? This is the idea behind pretesting, one of the most exciting developments in learning-­science. That is: The (bombed) pretest drives home the information in a way that studying as usual does not. The excitement around prefinals is rooted in the fact that the tests appear to improve subsequent performance in topics that are not already familiar, whether geography, sociology or psychology. The basic insight is as powerful as it is surprising: Testing might be the key to studying, rather than the other way around. Yet another species of exam collapse is far more common. a. b. c.

Discovering Psychology: Updated Edition 1. Past, Present, and Promise This introduction presents psychology as a science at the crossroads of many fields of knowledge, from philosophy and anthropology to biochemistry and artificial intelligence. With Dr. Mahzarin Banaji of Harvard University and Dr. Emanuel Donchin of the University of Illinois. Updated. 2. 3. 4. 5. 6. 7. 8. 9. 10. 11. 12. 13. 14. 15. 16. 17. This program explores the ways in which males and females are similar and different, and how gender roles reflect social values and psychological knowledge. 18. 19. 20. 21. 22. 23. 24. 25. 26.

Aspirin may cut colon cancer risk by 60% Taking two aspirins a day reduced the risk of colorectal cancer by more than 60% in people with a family history of the disease, a large study shows. "This is one more piece of evidence that there are some very positive effects of aspirin, and it should be considered very seriously for people who are at risk of colorectal cancer," says Tim Bishop, one of the authors of the study and a professor of epidemiology at Leeds University in England. Observational studies have shown that aspirin lowers the risk of developing colorectal cancer, but this is the first randomized controlled trial to find the effect. Researchers from the Universities of Newcastle and Leeds in England followed almost 1,000 patients from 43 medical centers in 16 countries. The patients all had Lynch syndrome, a genetic condition that predisposes people to develop colorectal cancer and other types of cancer. "If I had a family history of bowel cancer, I would feel quite strongly about taking aspirin regularly," he says.

Paracetamol, Acetaminophen, or the medication known as Tylenol in U.S. Paracetamol, known also as Acetaminophen, has been in use as an analgesic for home medication for over 30 years. It is accepted as a very effective treatment for the relief of pain and fever in both adults and children. Tylenol (its name in the U.S.) has analgesic, pain killer, and antipyretic (relieves fever) effects. Accordingly, such effects are remarkably comparable to those of Aspirin. There are almost no groups of people who should not take it. It is appropriate for small children and adults as well. ■ Read: NSAIDs types, uses, contraindications, and their relation to ulcers Paracetamol is the most widely accepted medicine. Being an otc medication, it can be found in retail pharmacies and grocers shops. Its pain relief and fever relief effects are similar to those of Aspirin (acetyl salicylic acid). Nevertheless, Acetaminophen is considered the first line treatment in osteoarthritis. ■ Prostaglandins and inflammation: the synthesis, effects, and functions

Indomethacin for the arthritis treatment: Information on drug NSAIDs are a good choice to overcome cold and flu after natural cure with vitamin C. That’s how the NSAIDs are remembered, because of their usage for cold and flu. Simply because they are valuable allies against cold and flu. First of all, NSAIDs stands for Non Steroidal Anti-inflammatory Drugs. Indomethacin is a member of the NSAIDs family, renowned for its potential action. Indications of Indomethacin Indomethacin acts as anti-inflammatory, anti-rheumatic, antipyretic, and analgesic. Check out: what are the prostaglandins? Osteoarthritis Indomethacin is perfect for the pains accompanying osteoarthritis, the arthritis due to the joints lining breakdown. Rheumatoid arthritis This is a type of arthritis in which there is swelling of the lining of the joints. Acute gouty arthritis/Gout Severe pain in joints when the uric acid builds up in them. Ankylosing spondylitis An arthritis where the spine/backbone is greatly and majorly affected. Tendonitis/Tendinitis Bursitis Others Signature Related

NSAIDs types, uses, contraindications, and their relation to ulcers In a previous article about prostaglandins, we talked about the formation of PGs. Also, we mentioned their effects and functions in details. This article is about diminishing the bad effects of prostaglandins coming from cox 2, the bad guy. Before starting, I highly recommend you to read the post about prostaglandins to fully understand how the NSAIDs work. The abbreviation NSAIDs stands for non steroidal anti-inflammatory drugs. The body has many immune responses, among which is the inflammation. Cox enzymes, cyclooxygenase enzymes, or cyclooxygenases are the enzymes involved in formation of prostaglandins. Both cox 1 and cox 2 are similar in many aspects, except that each of them has its distinct set of actions. NSAIDs have always been known as the commonly prescribed medications used to bring down the inflammation, fever, and pain. Taking a non steroidal anti-inflammatory drug with no selectivity to cox enzymes is not always a good choice. NSAIDs classification Selective/newer NSAIDs

Diclofenac: one of the powerful NSAIDs commonly used NSAIDs is the abbreviation that stands for non-steroidal anti-inflammatory drugs. They are a class of drugs used for treatment of arthritis, headaches, sports injuries, cold and flu, and cramps during menstrual cycle. NSAIDs are many and perhaps the most renowned of which are diclofenac, ibuprofen, paracetamol, and aspirin. Diclofenac sodium, a form of diclofenac is known commercially as Voltaren or Cataflam. ■ Prostaglandins and inflammation: the synthesis, effects, and functions Optimum dose of Diclofenac Diclofenac should be taken with food to reduce stomach irritation. Drug-Drug interaction Diclofenac, as other NSAIDs, causes likely several interactions which affect the action of other drugs. Diclofenac + Aminoglycoside antibiotic (as streptomycin, or garamycin) The aminoglycoside blood level may increase due to decreasing its elimination because of diclofenac. Administering NSAIDs (as Diclofenac and Aspirin) with Methotrexate Diclofenac with hypertensive and hypotensive medications

Ibuprofen, the painkiller NSAID, its uses and side effects Previously, we talked about cold and flu, and the differences between them. We mentioned also that vitamin c is a very efficient vigilant sentry which is used most commonly to counteract the symptoms of both cold and flu. This time, we will get to know about an important cold and flu remedy. Ibuprofen Ibuprofen (EYE bue PROE fen, nomenclature: Isobutyl propanoic phenolic acid), is used for counteracting common cold and flu symptoms. It is a non steroidal anti-inflammatory drug (NSAID) that acts mainly as analgesic, anti-inflammatory, antipyretic, and for the relief of symptoms of arthritis and dysmenorrhea. Ibuprofen should be given with care to patients with a history of gastrointestinal disease. ■ Prostaglandins and inflammation: the synthesis, effects, and functions ■ Paracetamol, Acetaminophen, or the medication known as Tylenol in U.S. ■ Diclofenac: one of the powerful NSAIDs commonly used Ibuprofen should be given with care to patients with history of heart failure or hypertension.

Cephalexin: everything you need to know about this medication Cephalexin is included in a group of drugs known as Cephalosporin antibiotics. It is a semi-synthetic cephalosporin antibiotic used typically for its bactericidal activity. It’s used in the treatment of bacterial infections and for preventing infections in the heart valves. Working via interfering with bacterial cell wall formation, cephalexin causes the bacterial cell wall to rupture, hence the death of bacteria. Inefficiency against viral infections is included within the cons of cephalexin, due lacking the capability of counteracting the viral infections such as common cold, flu, and stomach flu. With a pros over penicillin, cephalexin could be used as an alternative to penicillin to treat a range of common infections for patients who are allergic to penicillin. Efficiency range of Cephalexin In-vitro, it’s active against: A- Aerobes, and Gram +ve such as: 1. 2. B- Aerobes, and Gram -ve like: 1. 2. 3. 4. 5. Cephalexin is indicated for the treatment of 1. 2. 3. 4. 5. 6. 7. N.B. N.B.

Prescribing Skills Assessment (PSA) Prescribing Item Case presentation A 74-year-old man presents to the medical assessment unit complaining of shortness of breath at rest and swollen legs. These symptoms have been gradually increasing over the last 2 weeks. He has been having difficulty sleeping and sat up in a chair all of last night, calling his doctor this morning. PMH. On examination HR 105/min and regular, BP 110/70 mmHg, JVP elevated at 6 cm, RR 30/min, O2 sat 93% on air. Investigations Na+141 mmol/L(137–144),K+4.2 mmol/L(3.5–4.9), U7.0 mmol/L(2.5–7.0), Cr120 µmol/L(60–110).ECG shows sinus tachycardia. Prescribing request Write a prescription for ONE drug that will help to relieve his fluid overload and breathlessness. This question item is worth 10 marks Prescription Review Item A 57-year-old man with chronic obstructive pulmonary disease and ischaemicheart disease has been admitted to hospital with a lower respiratory tract infection. Question A Question B This question item is worth 4 marks Planning Management Item