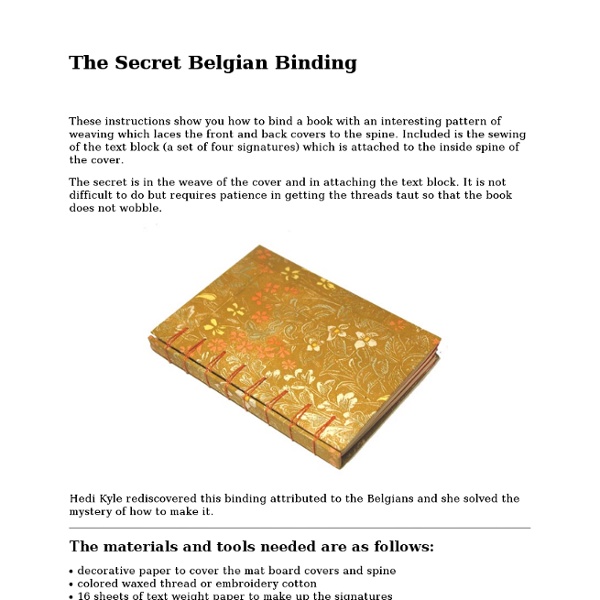 The Secret Belgian Binding These instructions show you how to bind a book with an interesting pattern of weaving which laces the front and back covers to the spine. Included is the sewing of the text block (a set of four signatures) which is attached to the inside spine of the cover. The secret is in the weave of the cover and in attaching the text block. It is not difficult to do but requires patience in getting the threads taut so that the book does not wobble. Hedi Kyle rediscovered this binding attributed to the Belgians and she solved the mystery of how to make it. The materials and tools needed are as follows: Questions or comments?

Make Your Own Photo Journals and Notebooks Our friend Judy runs a one-woman shop making the most beautiful handmade journals we’ve ever seen. Naturally, when we saw the photographs she used for her covers, we ran straight to her apartment, video camera in hand. So today we’ve got two special treats for you: 1) A how-to video of Judy showing you how you can make your own perfect-bound journal using two 4×6 photos for the cover, some paper, glue, and a few other tools. 2) Two special edition journals made with pages of sugarcane fiber and reclaimed paper by Judy herself. Created for writers, illustrators, artist and designers, her notebooks have unique features like an inner pocket for looseleaf notes and a spine that opens flat for writing or drawing across the pages. p.s. Step 1: Gather the ingredients You’ll need: Step 2: Watch Our Video Step 3: Make Your Own Photo Journal! They’re great for keeping track of ideas and they make great gifts! Finally, for a limited time, we’re selling spiffy photo journals made by Judy in our store.

Stuffed animal This is actually quite a good idea! The magic button — Make Everything OK How to Make a Kusudama Flower Edit Article Edited by Mimi, Krystle, Knowledge Junkie, Eric and 43 others A pretty kusudama flower can be made by folding five or six square pieces of paper. If you make twelve flowers, they can be assembled into a beautiful kusudama ball. Ad Steps a Kusudama Flower Step 1.360p.mp4 00:00 00:04 00:04 spaceplay / pauseescstopffullscreenshift + ←→slower / faster (latest Chrome and Safari)←→seek . seek to previous 12…6 seek to 10%, 20%, …60% 1Fold a square piece of paper in half diagonally. 17Wait for the glue to dry completely before removing the paperclips. Tips Warnings Things You'll Need 5 pieces of square paper 5x5 (for example, Sticky Notes)Glue (white liquid or stick)Scissors

The Phrontistery: Obscure Words and Vocabulary Resources My books and how to make them « Much of a muchness I thought as I haven’t been making so many books recently and yet I am still passing myself off as a bookbinding blog, I ought to at least show you some of the books I have made during the last year. Be warned, there are a lot of them! You can see them all together by clicking this link to my Flickr page And I really must get my Etsy shop up and running…. Ribbon binding – a tutorial I am often asked to explain how I make my books so I thought I would prepare a very basic tutorial. This method will make an A5 sized book. Materials 40 sheets of paper This can be from a shop bought sketch book, cut to size or even printer paper. So here we go. Method • First fold all the paper sheets in half. Image:click to enlarge • Take one of the sections, and starting at the right side, place a mark on the crease 0.5cm from the end, then 5cm from the end. • Holding all ten sections together, repeat the markings on all sections. • You have just made a text block. • You now need to cut three pieces of board.

Ice Formations Diurnal Freeze-Thaw Cycles In January 2007 I was introduced to some interesting photos of ice growing from a metal fence on Vancouver Island, British Columbia, Canada. I corresponded with Sheryl Terris about her photos and she gave me permission to use them on my web page. In these three photos we see ribbons of ice emerging from where the top beam sits on the vertical support posts. The sign above warns to Beware of Dog and in the photo below we see the legs of one of those dogs. These three photos show the junctions of the vertical steel support beams with the overlying larger beam. The two photos below are quite special. The extrusion of two rods of ice from a small hole in the base of the steel fence above is quite exotic. My Attempts to Grow Ice to Explain Many Things I was not able to find any ice on plant stems in the fall and winter 2006-2007 season, although I looked many places. Then in January 2007 I was introduced to these photos of ice being extruded from the fence.

24 smart uses for sugar The history of sugar is not a simple one. From ancient China to the colonies to Candy Land, sugar has been making its mark throughout time in myriad ways. The "white gold," as British colonists called it, has now reached mundane staple status for much of the western world, sitting in a five-pound bag in the pantry patiently waiting to be spooned into a cup of coffee or employed in a batch of cookie dough. But that doesn't mean the coruscating carbohydrate can't be put to other uses. In a bind, regular table sugar can pinch-hit for a number of other concoctions, often times taking the place of more costly or possibly toxic solutions. 1. According to a study in Pediatrics, babies who were given a one-to-four sugar-water solution (directly into the mouth or administered on a pacifier) before immunizations handled the pain of the shots better than children who received only water. 2. You can treat wounds with a sprinkle of sugar: Wives' tale or wise truth? 3. 4. 5. 6. 7. 8. 9. 10. 11. 12.

Origami box in Crafts for home stationery and paper for birthdays, anniversaries or dinners Fabulous origami box which we can make it in a moment, and it's great to keep the gifts we want to give as a present or just to store our little treasures. It's as simple as with a pencil mark the diagonals of the square paper (about 20 cm to the base and 14,5 cm for the top) chosen for the box. Then fold the opposite sides toward the center helping a pencil to mark well the fold (the wrong side). To make the base, fold the opposite sides parallel to the midpoint and toward the inside and should measure about 3,5 cm. For the lid, fold the opposite sides (should measure 1,4 cm each), folding and unfolding and repeating the process with the other side. If we pay attention, a little wrinkle has been created in the folds of the corners of the base and lid. Finally, displays the opposite sides of both the base and lid and return to fold inward. To clarify any doubts, here's a great video overview:

Was Ayn Rand a Conservative? Was Ayn Rand a Conservative?by Neil Parille Introduction Some years ago I consulted a biographical dictionary for information on Ayn Rand. The dictionary described Rand as a “conservative.” At the same time, the occasional references to Rand as a conservative call for explanation. Ayn Rand’s “Conservatism” The idea that Rand was a conservative probably results from a focus on her advocacy of capitalism in isolation from the rest of her thought. Another reason Rand might be considered a conservative is that some of her views on moral theory and individual moral issues also find echoes in conservative thought. It is also interesting to observe how Rand allies herself with the middle class in opposition to the intellectuals and the “counter culture.” There are other issues on which Rand sided with conservatives and the middle class. Rand also attacked progressive education and its chief theoretician, John Dewey, both frequent targets of conservatives. Anti-Egalitarianism The State Persecuted?

Long stitch tutorial part 1! Due to popular demand I've decided to go ahead and work on a long stitch tutorial. I'm going to work on it in several parts, it's 31 pictures long! This can work on paper covers, fabric covers and the leather covers I've demonstarted here. First start with my tutorial on creating stations and measuring those onto your signatures. Cut stations on spine and punch stations in signatures. A long stitch needs sets of holes- every hole needs a partner! I work back to front. ONce you've entered that station you can thread your needle through the spine. Then enter the next station up and pull the needle through and into the center fold of the signature. Now your going to tie the working end of the thread to the tail left in the middle of the signature. Now exit the next station up from the station you just tied the knot over. First your going to tighten the tension of the thread. Thats the end of part one of the tutorial.