Using Games for Learning: Practical Steps to Get Started 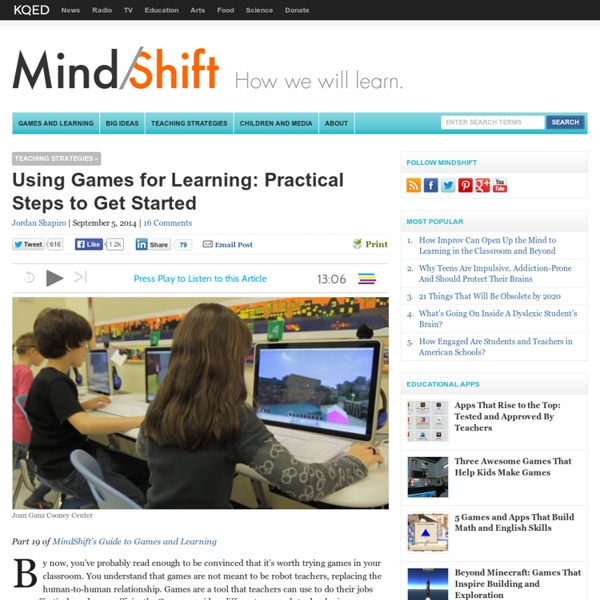 Joan Ganz Cooney Center Part 19 of MindShift’s Guide to Games and Learning By now, you’ve probably read enough to be convinced that it’s worth trying games in your classroom. You understand that games are not meant to be robot teachers, replacing the human-to-human relationship. Games are a tool that teachers can use to do their jobs more effectively and more efficiently. Games provide a different approach to developing metacognitive skills through persistent self-reflection and iteration of particular skill sets. There are so many great reasons to include digital games among classroom activities. Though every educator can find her own way, here are ideas for the first four steps to getting started with digital games in the classroom. Step 1: Assess Your Resources What platforms do you have available in your class? Hardware is one of the biggest determining factors, and it will have a significant impact on the way you use games in the classroom. Laptops also have their virtues. Related

Rubrics and Rubric Makers Super Rubric Makers - Print Them Instantly! - All K-12 Subjects View Now... The Use of Videogames, Gamification, and Virtual Environments in the Self-Management of Diabetes: A Systematic Review of Evidence To cite this article:Theng Yin-Leng, Lee Jason W.Y., Patinadan Paul V., and Foo Schubert S.B.. Games for Health Journal. -Not available-, ahead of print. doi:10.1089/g4h.2014.0114. Online Ahead of Print: May 26, 2015 Author information Tips for Communicating with Deaf and Hard-of-Hearing People - VirginiaNavigator.org Introduction Deafness is a fact of many people's lives -more than 28 million Americans have some form of hearing loss. Like their hearing counterparts, deaf (used here, the word 'deaf includes all ranges of hearing impairment, from mild to profound. For a more complete definition see the 'vocabulary' section.) people build successful careers, have families, watch television, go to the movies, talk on the telephone, play sports, and travel throughout the world. Most deaf people don't view their deafness as a disability or as a problem that should be fixed. For many of them, it's a natural part of a cultural experience that they share with friends, both deaf and hearing.

What QR Codes Can Do For You! During one of my workshops this afternoon at Carondelet High School some asked for suggestions about using QR codes. Here are some of the uses that I suggested. TagMyDoc is a tool that allows you to apply a QR code to Word documents and PDFs that are stored on your computer. Upload your document then TagMyDoc creates and applies a QR code to it.

Social Network Analysis and Gaming: Survey of the Current State of Art We report on the current state of the art of social network analysis based on the enormous datasets that exist in massive multiplayer online games and multiplayer online arena games. At least since the rise of World Of Warcraft as a massive multiplayer online game, the online gaming world is slowly becoming a center of attention for game developers and players, but there is still little analysis done on the connections between the players of a game. In this paper, an overview of what can be entailed by such an analysis is given, including a wide range of possible approaches, including classic social network analysis, or how to find a not predefined order of referral between the players. The biggest problem for this new area of research is the dynamic of connections coupled with the enormous amount of data and the unknown relations between players in their real lives and other games. But exactly these connections are crucial for serious game development.

Games Can Advance Education: A Conversation With James Paul Gee Getty Part 10 of MindShift’s Guide to Games and Learning. Most people involved with games and learning are familiar with the work of James Paul Gee. A researcher in the field of theoretical linguistics, he argues for the consideration of multiple kinds of literacy. The notion of “New Literacies” expands the conception of literacy beyond books and reading to include visual symbols and other types of representation made possible through, among other things, current digital technologies.

Can Assistive Technology Really Help the Deaf to Communicate Independently? - SSB BART Group By Guest Blogger, Anirban Lahiri The field of Assistive Technology has grown by leaps and bounds over the past two decades. Unfortunately, this doesn’t seem to be well reflected with the existing solutions for the deaf with regards to communication. According to the Survey of Income and Program Participation (SIPP), across all age groups, approximately 600,000 people in the United States (0.22% of the population, or 2.2 per 1,000) alone are “deaf” (Gallaudet Research Institute, 2011). The primary medium of communication within the deaf community is Sign Language. It is estimated that more than 500,000 people use American Sign Language.

Coding Across the Curriculum "I think everybody in this country should learn how to program a computer because it teaches you how to think." - Steve Jobs The above quote is on the homepage of the coding website Tynker. Coding, formerly known as programming (I still remember teaching myself BASIC on my Commodore 64 back in the '80s!), has once again returned to classrooms nationwide. A range of high-profile individuals, including Mark Zuckerberg, Bill Gates, Dr. The dark side of gamification How well do you chop your cucumber? It’s a ridiculous question, I know, but in the short film Sight the protagonist plays an augmented reality game that awards him points for the consistency in the thickness of his slices. The scene irked me. The last thing I would want while preparing dinner is a computer judging me. Really, who cares how wide I cut the slices, and who judged that distance to be the perfect width anyway? It’s certainly not my idea of fun.

Speak 180: Why Is Game-Based Learning Good for Today's Youth?  Speak 180 hosted by Marcus T. Wright is a new written segment where industry experts, thought leaders, and notable figures get a chance to answer an important question in 180 words or less. A 180 represents a turnaround, as in, our guests have 180 words to possibly turn around your opinion about a topic.