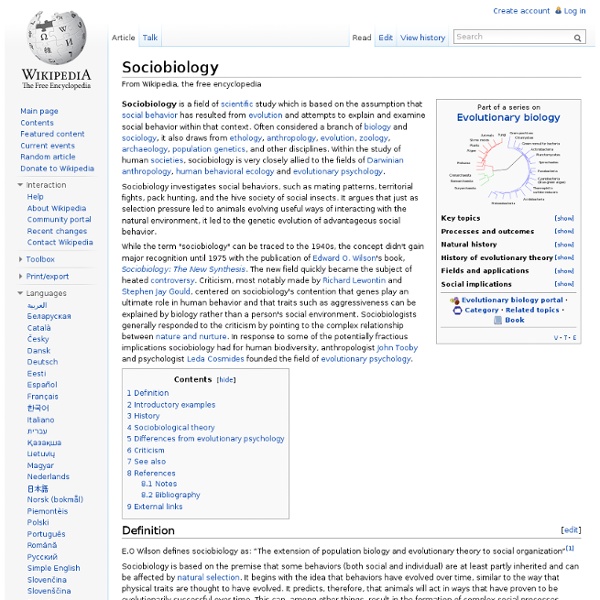 Sociobiology is a field of scientific study which is based on the assumption that social behavior has resulted from evolution and attempts to explain and examine social behavior within that context. Often considered a branch of biology and sociology, it also draws from ethology, anthropology, evolution, zoology, archaeology, population genetics, and other disciplines. Within the study of human societies, sociobiology is very closely allied to the fields of Darwinian anthropology, human behavioral ecology and evolutionary psychology. Sociobiology investigates social behaviors, such as mating patterns, territorial fights, pack hunting, and the hive society of social insects. While the term "sociobiology" can be traced to the 1940s, the concept didn't gain major recognition until 1975 with the publication of Edward O. Definition[edit] E.O Wilson defines sociobiology as: “The extension of population biology and evolutionary theory to social organization”[1] Introductory example[edit] E. Related:  Nuerobiology

Behavioral neuroscience Behavioral neuroscience, also known as biological psychology,[1] biopsychology, or psychobiology[2] is the application of the principles of biology (in particular neurobiology), to the study of physiological, genetic, and developmental mechanisms of behavior in humans and non-human animals. It typically investigates at the level of neurons, neurotransmitters, brain circuitry and the basic biological processes that underlie normal and abnormal behavior. Often, experiments in behavioral neuroscience involve non-human animal models (such as rats and mice, and non-human primates) which have implications for better understanding of human pathology and therefore contribute to evidence-based practice. History[edit] Behavioral neuroscience as a scientific discipline emerged from a variety of scientific and philosophical traditions in the 18th and 19th centuries. Other philosophers also helped give birth to psychology. Relationship to other fields of psychology and biology[edit]

Evolutionary psychology Evolutionary psychology (EP) is an approach in the social and natural sciences that examines psychological traits such as memory, perception, and language from a modern evolutionary perspective. It seeks to identify which human psychological traits are evolved adaptations – that is, the functional products of natural selection or sexual selection. Adaptationist thinking about physiological mechanisms, such as the heart, lungs, and immune system, is common in evolutionary biology. Some evolutionary psychologists apply the same thinking to psychology, arguing that the mind has a modular structure similar to that of the body, with different modular adaptations serving different functions. The adaptationist approach is steadily increasing as an influence in the general field of psychology.[2][3] The theories and findings of EP have applications in many fields, including economics, environment, health, law, management, psychiatry, politics, and literature.[8][9] Scope[edit] Principles[edit]

The Dark Side of Oxytocin, the Hormone of Love - Ethnocentrism Yes, you knew there had to be a catch. As oxytocin comes into sharper focus, its social radius of action turns out to have definite limits. The love and trust it promotes are not toward the world in general, just toward a person’s in-group. Oxytocin turns out to be the hormone of the clan, not of universal brotherhood. Psychologists trying to specify its role have now concluded it is the agent of ethnocentrism. A principal author of the new take on oxytocin is Carsten K. In a report published last year in Science, based on experiments in which subjects distributed money, he and colleagues showed that doses of oxytocin made people more likely to favor the in-group at the expense of an out-group. These nationalities were chosen because of a 2005 poll that showed that 51 percent of Dutch citizens held unfavorable opinions about Muslims, and other surveys that Germans, although seen by the Dutch as less threatening, were nevertheless regarded as “aggressive, arrogant and cold.” In Dr. Dr.

Critical Thinking: Tools for Taking Charge of Your Professional and Personal ... - Richard Paul, Linda Elder 10 Practical Uses For Psychological Research in Everyday Life | People love to give each other advice. The web is full to bursting with all types of pseudo-psychological advice about life. The problem is, how much of this is based on real scientific evidence? Well, here on PsyBlog we’ve got the scientific evidence. So here’s my top 10 list of what you can learn practically from the psychological research discussed here recently. 1. 2. 3. 4. 5. 6. 7. 8. 9. 10.

The Making-of Innovation » Towards Human-Centered Design The consequence of taking customer orientation serious is to integrate them right at the heart of value creation – in new product design and development. The transitions in innovation management during the last years allow us exactly to that in a more resolute way. By democratizing knowledge and information the social media revolution strongly supported the dissemination of concepts such as open innovation and co-creation and at the same time transformed people from content consumers into content producers and even co-designers. The consequence is a change in the prevailing role models of creating new products. The ability of interdisciplinary collaboration inside and outside the firm is more essential than ever before. THE CHANGING ROLE OF PRODUCT DESIGN FOR INNOVATION Industrial design is an applied science whereby the aesthetics and usability of mass-produced products are improved for marketability and production. Figure 1: Interdisciplinary Framework of Human-Centered Innovation