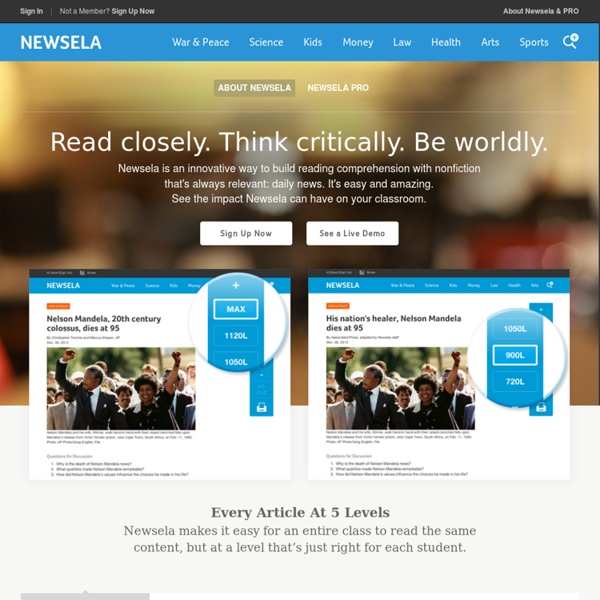 #.VAeQjtGI70M This is a guest post from Beth Holland of EdTechTeacher.org, an advertiser on this blog. Whether you teach elementary, middle, or high school, a common challenge exists: finding non-fiction content at reading level. This is an especially pressing concern for teachers incorporating the CCSS Standards into their curricula. Given that varied reading levels may exist within a single class, it can seem virtually impossible to have all students access the same content in a way that allows them to comprehend the material. Creating differentiated reading groups may seem equally unrealistic since it is impossible for a teacher to work with multiple students or groups all at the same time. NEWSELA solves the first dilemma by providing teachers with a database of non-fiction articles. Sample NEWSELA article With Google Docs, you can leave comments as reading prompts to which your students can reply as well as give them the opportunity to highlight and comment on the text themselves.

Breaking News English Lessons: Easy English News | Current Events A Hunger for Dystopia: Critical Thinking on the Journey to Self-Discovery I was in high school in the mid '90s when I first read George Orwell's dystopian novel 1984. It lifted the veil of my childhood innocence, opening my eyes to the injustices of the adult world. Once I finished the chilling, final sentence of the novel, there was no going back to my naive self. New dystopian books are dominating the bestseller list. 2013 was officially the year of Divergent. 1984 helped me uncover dark truths about the adult world. Today's stories resonate with teenagers in a similar way. Dystopian novels belong in our classrooms because they hold a mirror up to our fears and flaws. For those of you that read 1984, Fahrenheit 451, or Brave New World in high school, here are five updates to the dystopian genre that will captivate you and your students. The Handmaid's Tale Margret Atwood wrote this shortly after the conservative revival of the 1980s, just as Ronald Reagan and Margaret Thatcher assumed power. The Giver Feed The Hunger Games Divergent . . .

News.com.au | News Online from Australia and the World | NewsComAu WHAT’S GOING ON IN THIS PICTURE - The Learning Network Blog Photo Students 1. After looking closely at the image above (or at the full-size image), think about these three questions: What is going on in this picture? Read more… Updated: Oct. 2, 2015 1. Read more… Updated: Sept. 25, 2015 1. Read more… Updated: Sept. 18, 2015 Welcome back, students and teachers. We’re excited to begin our fourth year of “What’s Going On in This Picture?” We hope students will continue to join our moderators at Visual Thinking Strategies in responding to other students, making the feature truly an interschool conversation. Please note that we’re delaying the reveal until Friday mornings this year to allow students additional time to comment on the image and to reply to other students. Thank you for participating. Read more… Updated: June 2, 2015 Note: This is our final “What’s Going On in This Picture?” 1. What’s going on in this picture? Read more… Updated: May 19, 2015 Note: We’ve switched to the more advanced commenting system used by the rest of The New York Times. That’s all.

Newsreel Easy Nyheter från hela den engelskspråkiga världen, presenterade på lätt engelska. Rubriker: Skolflickor i Nigeria kidnappade. En astronaut vill ha bättre mat i rymden. Tvillingarna Ann och Elizabeth separerades, träffas igen efter 78 år. Sanna Nielsens låt Undo får kritik. Här kan du skapa egna klipp ur programmet Hjälp Stäng 1. Se en film om hur man skapar klipp. DelaKopiera länken genom att trycka ctrl+C på PC eller cmd+C på Mac. Understand what you read Extreme Photo of the Week Photograph by Mike Schirf “I love the skiing down the best, but I don't love the skinning up,” says 11-year-old Lilliana Libecki, seen here with her dad, Mike, on their recent sailing-skiing expedition to the Antarctic Peninsula in front of Paradise Bay and a colony of Gentoo penguins. It was Lilliana’s very first expedition with her dad, a National Geographic Adventurer of the Year, Expeditions Council grantee, and veteran of 50-some remote expeditions. “I will never ever forget the skiing and icebergs and how curious and unafraid the penguins were,” Liliana says. When Mike returned from Antarctica in 2008 with photos of skiing and snowboarding on the continent, Lilli, then five years old, was inspired. “Finally when she was old enough, she started training for this goal in the backcountry and worked so hard to make this dream come true,” Mike says.

Immigrant earnings ‘a failure’ - Göteborg Daily Refugees and other immigrant groups are finding it hard to establish themselves in the labour market, even after 10 years in Sweden, suggests a report from daily newspaper Dagens Nyheter. The newspaper followed the progress of nearly 15,500 immigrants of working age who received permanent residency in 2004 and are still registered in Sweden. After ten years, those who came here as refugees earned a median wage of only 11,100 kronor per month - less than half the figure for the entire population. Around three out of ten receive welfare benefits from the municipality. Another group who had problems establishing themselves were those who came here to be with relatives. Olof Åslund, professor and director general of the Institute for the Evaluation of Labour Market and Education Policy, thinks the results for these two groups are problematic: “It’s a failure when so many people have difficulties gaining stable employment and being self-sufficient.