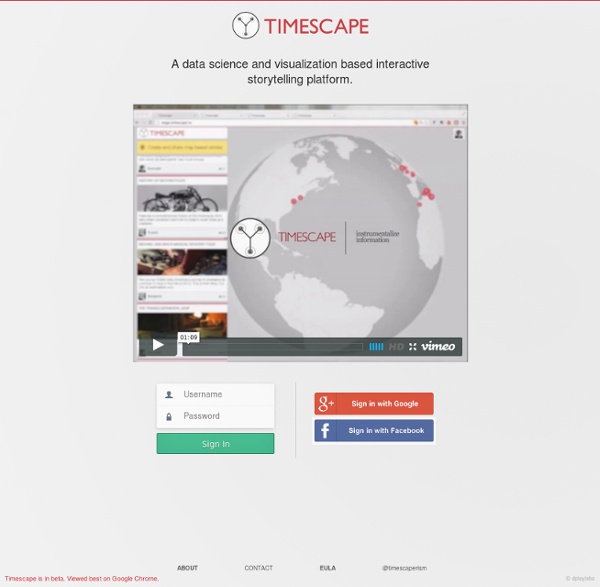 Earth Outreach Before You Begin In order to complete this tutorial, you will need some text, photo and video content to add to your tour. You can use your own text, photos and videos, or you can use the sample content provided by our friends at the Jane Goodall Institute (JGI). Just download the zip file below and extract the contents to a folder on your desktop.

Will Self: Are humans evolving beyond the need to tell stories? A few years ago I gave a lecture in Oxford that was reprinted in the Guardian under the heading: “The novel is dead (this time it’s for real)”. In it I argued that the novel was losing its cultural centrality due to the digitisation of print: we are entering a new era, one with a radically different form of knowledge technology, and while those of us who have what Marshal McLuhan termed “Gutenberg minds” may find it hard to comprehend – such was our sense of the solidity of the literary world – without the necessity for the physical book itself, there’s no clear requirement for the art forms it gave rise to. I never actually argued that the novel was dead, nor that narrative itself was imperilled, yet whenever I discuss these matters with bookish folk they all exclaim: “But we need stories – people will always need stories.”

Guardian launches open-source data journalism tool Collaborative data journalism platform Swarmize has launched today to offer editors and journalists better tools for the use of data, including real-time visualisation. Swarmize, now in alpha, won funding through the Knight News Challenge in June, and has been built at the Guardian over the last four months. "The Guardian and lots of other news organisations like to use Google Docs for collecting data," said Matt McAlister, the Guardian's general manager of new digital businesses. I'm hopeful that we'll start to see better data journalism because the tools are moving alongMatt McAlister, the Guardian "It's free, it's pretty easy to use, however it does have a lot of shortfalls," McAlister told Journalism.co.uk.

The Other Mystery of Easter Island Moai statues Easter Island is branded into popular consciousness as the home of the mysterious and towering moai statues, but these are not the only curiosity the South Pacific island holds. Where the moai are fascinating for their unknown purpose and mysterious craftsmen, the island's lost language of Rongorongo is equally perplexing. The unique written language seems to have appeared suddenly in the 1700s, but within just two centuries it was exiled to obscurity. Known as Rapa Nui to the island's inhabitants, Rongorongo is a writing system comprised of pictographs.

Mapping Cinematographic Territories Adam’s Wall (director Michael MacKenzie, 2008) This tutorial is a step-by-step guide to help anyone map her own narrative through our AtlasCine application and share it with friends, family and colleagues (see examples here: A more detailed description of this application is also available in the following paper “How can we map stories? A cybercartographic application for narrative cartography” (2014) by S. Caquard and J.P Fiset.

Leadership, Connection and Power of Storytelling If the job of a leader is to take people to a better place, they first need to take people’s imagination to that better place. One of the biggest mistakes leaders make when communicating about the future is to show future in form of data, numbers and charts. They are good to capture the mind of people, but people will only endeavor to go there when their hearts are engaged. Storytelling has been one of the most powerful tools to drive imagination of people first before people decide to take actions towards the future.

Infographic Designers' Sketchbooks by Steven Heller and Rick Landers reveals ... Copyright Tim Hucklesby Infographics are a staple of modern media. At their best, they’re elegant, streamlined visual capsules of information that help us process complex data at a glance. In Infographic Designers' Sketchbooks by Steven Heller and Rick Landers, out in October, more than 50 leading graphic designers and illustrators from around the world share their creative processes behind the art and science of data visualization. Using graphic shorthand to convey complex information has been used in magazines and newspapers since the 19th century, Heller writes, but today “a greater number of platforms and media outlets means it is incumbent on designers, who a decade ago would never have thought of themselves as ‘information architects,’ to become makers of some form of information visualization.” The book reveals various designers’ methods for developing and fleshing out ideas, from sketching drawings and doodles to digital mock-ups.

Custom Google Maps Style Tool A tool for playing around with Google Maps colours and generating the styling code. The generated Google Maps code can be copied from the bottom of the page. Colours can be controlled with sliders below or by entering a hex value. How Impact Businesses Use Storytelling to Build Movements An impact business or social enterprise is an entity that works to solve a social problem through humanitarian or economic intervention, and usually sustains itself by raising funds or by generating profit. It focuses on improving the status quo of specific disadvantaged sections of society by providing them sustainable livelihood opportunities, improving their access to basic facilities -- like education, health, energy -- or assisting with local crises. So what makes a dream like this work?

Resources for Primary Source Documents Primary sources are resources that were first-hand created in a given period of time and never undergone any kind of editing or distortion. These sources are multimodal and they come in different forms. They can be artifacts, documents, pictures, recordings, essays, photographs, maps...etc. Now with the globalization of knowledge and the pervasive use of digital media, primary sources become accessible to everybody with an internet connection. However, the search for these materials is akin to a scavenger hunt and hence the importance of having a handy list such as the one below to keep for rainy days. I have been scouring the web for several hours and finally come up with this selection.

Styling Google Maps Map Stylr is a new Google Maps API Styled Maps wizard that can help you create a unique style for your own Google Maps. Map Stylr includes the Styled Maps wizard and a showcase of styles created by users of the site. The Map Editor allows you to customize the presentation of the standard Google base maps, changing the visual display of such elements as roads, parks, and built-up areas. Anthropology as Theoretical Storytelling [This essay is part of the Fall 2015 Savage Minds Writers’ Workshop series.] Anthropologists are storytellers. We tell stories: other’s stories, our own stories, stories about other’s stories. But when I think about anthropology and storytelling, I think also of something else, of anthropology as theoretical storytelling. What is anthropology as theoretical storytelling?