An Inside Look at Anonymous, the Radical Hacking Collective 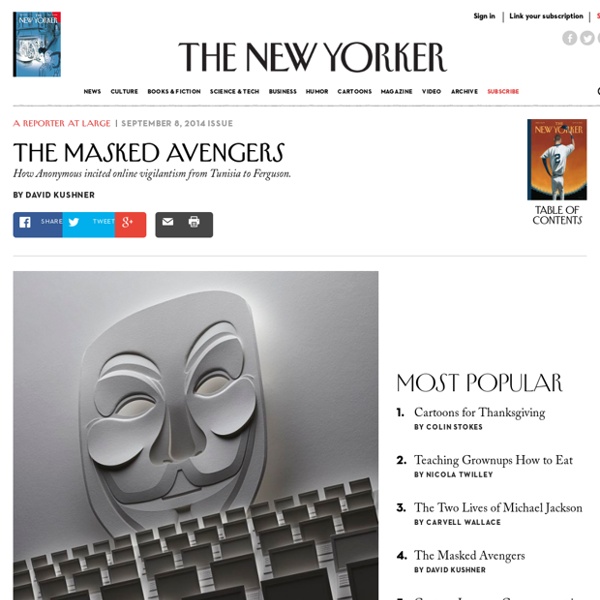 In the mid-nineteen-seventies, when Christopher Doyon was a child in rural Maine, he spent hours chatting with strangers on CB radio. His handle was Big Red, for his hair. Transmitters lined the walls of his bedroom, and he persuaded his father to attach two directional antennas to the roof of their house. CB radio was associated primarily with truck drivers, but Doyon and others used it to form the sort of virtual community that later appeared on the Internet, with self-selected nicknames, inside jokes, and an earnest desire to effect change. Doyon’s mother died when he was a child, and he and his younger sister were reared by their father, who they both say was physically abusive. Doyon found solace, and a sense of purpose, in the CB-radio community. Small and wiry, with a thick New England accent, Doyon was fascinated by “Star Trek” and Isaac Asimov novels. Doyon was drawn to computers, but he was not an expert coder. Doyon was incensed. “Ever hear of a group called Anonymous?”

The Long, Sad and Drawn out Death of the Games "Journalist". - GamesNosh Jon Blunn Jon does like things other than games, including a shameful penchant for the Sisters of Mercy, Siouxsie and the Banshees and stuff of that ilk.He's not bad at photography but terrible at writing in third person. Latest posts by Jon Blunn (see all) “The Equation group:” Hackers have infected computers worldwide with the sneakiest malware ever NEW YORK (CNNMoney) — A shadowy hacking group has infected computers at companies, universities and governments worldwide with the sneakiest malware ever. That’s according to a report Monday, February 16th by Internet security company Kaspersky, which described a hacking campaign “that exceeds anything we have ever seen before.” The mysterious group, which researchers nicknamed “the Equation group,” uses malware that’s unusually quiet, complex and powerful. And in some cases, it planted spyware on computers’ firmware, the programming that lives permanently on hardware. It’s an unheard-of move that means the malware can avoid detection by antivirus software.

Your Brain on Poverty: Why Poor People Seem to Make Bad Decisions - Derek Thompson In August, Science published a landmark study concluding that poverty, itself, hurts our ability to make decisions about school, finances, and life, imposing a mental burden similar to losing 13 IQ points. It was widely seen as a counter-argument to claims that poor people are "to blame" for bad decisions and a rebuke to policies that withhold money from the poorest families unless they behave in a certain way. After all, if being poor leads to bad decision-making (as opposed to the other way around), then giving cash should alleviate the cognitive burdens of poverty, all on its own.

Why Kids Sext - Hanna Rosin An inquiry into one recent scandal reveals how kids think about sexting—and what parents and police should do about it. All photos by Greg Kahn It was late on a school night, so Jennifer’s kids were already asleep when she got a phone call from a friend of her 15-year-old daughter, Jasmine. “Jasmine is on a Web page and she’s naked.” Jennifer woke Jasmine, and throughout the night, the two of them kept getting texts from Jasmine’s friends with screenshots of the Instagram account. It looked like a porn site—shot after shot of naked girls—only these were real teens, not grown women in pigtails. How Apple and Amazon Security Flaws Led to My Epic Hacking In the space of one hour, my entire digital life was destroyed. First my Google account was taken over, then deleted. Next my Twitter account was compromised, and used as a platform to broadcast racist and homophobic messages.

How LSD Microdosing Became the Hot New Business Trip Let's call him "Ken." Ken is 25, has a master's degree from Stanford and works for a tech startup in San Francisco, doing a little bit of everything: hardware and software design, sales and business development. Recently, he has discovered a new way to enhance his productivity and creativity, and it's not Five Hour Energy or meditation. Back To The Future? We’re Already There. Back To The Future? We’re Already There. “Drivers? Where we’re going we don’t need drivers.” That’s what Doc Brown should have said. But instead, he uttered the now famous line about flying cars not needing roads. An Art of Air and Fire: Brazil’s Renegade Balloonists—Vol. 2, No. 4—The Appendix Imagine waking up early on Sunday morning to the sound of loud explosions. Growing up in São Paulo in the 1990s, these explosions were often my weekend alarm clock. But the rude awakening was not at all reason for distress—rather, it was reason for joy and excitement. I would jump out of bed and run to the backyard, usually bumping into my older brothers, who were doing the same.

Meet the men who spy on women through their webcams "See! That shit keeps popping up on my fucking computer!" says a blond woman as she leans back on a couch, bottle-feeding a baby on her lap. The woman is visible from thousands of miles away on a hacker's computer. The hacker has infected her machine with a remote administration tool (RAT) that gives him access to the woman's screen, to her webcam, to her files, to her microphone. He watches her and the baby through a small control window open on his Windows PC, then he decides to have a little fun. Tailored Access Operations A reference to Tailored Access Operations in an XKeyscore slide The Office of Tailored Access Operations (TAO) is a cyber-warfare intelligence-gathering unit of the National Security Agency (NSA). It has been active since at least circa 1998.[1][2] TAO identifies, monitors, infiltrates, and gathers intelligence on computer systems being used by entities foreign to the United States.[3][4][5][6] The NSA terms these activities "computer network exploitation".

Resources I thought it would be helpful to create a resource page that you can always come to for all of your passive income needs. I’ll add to it as I learn more, but you’ll notice that in the future I will reference this page quite often. I recommend bookmarking it for your reference and convenience.