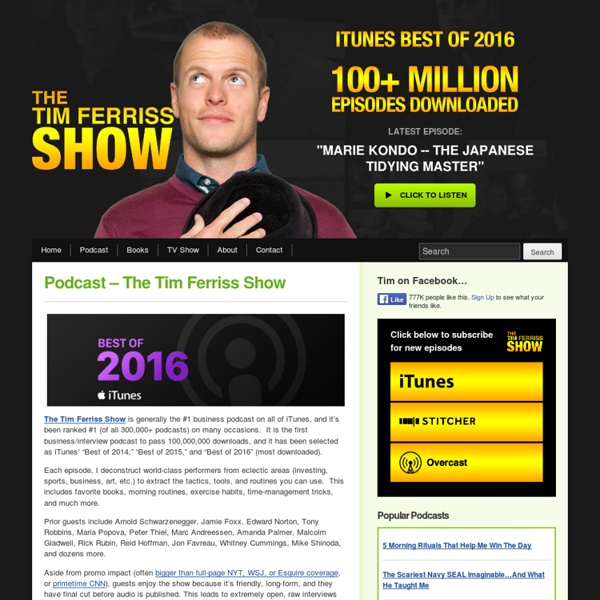 The Tim Ferriss Show is generally the #1 business podcast on all of iTunes, and it’s been ranked #1 (of all 300,000+ podcasts) on many occasions. It is the first business/interview podcast to pass 100,000,000 downloads, and it has been selected as iTunes’ “Best of 2014,” “Best of 2015,” and “Best of 2016” (most downloaded). Each episode, I deconstruct world-class performers from eclectic areas (investing, sports, business, art, etc.) to extract the tactics, tools, and routines you can use. Prior guests include Arnold Schwarzenegger, Jamie Foxx, Edward Norton, Tony Robbins, Maria Popova, Peter Thiel, Marc Andreessen, Amanda Palmer, Malcolm Gladwell, Rick Rubin, Reid Hoffman, Jon Favreau, Whitney Cummings, Mike Shinoda, and dozens more. Aside from promo impact (often bigger than full-page NYT, WSJ, or Esquire coverage, or primetime CNN), guests enjoy the show because it’s friendly, long-form, and they have final cut before audio is published. Marie Kondo — The Japanese Tidying Master Mr. Related:  Développement personnel

The Art of Strategic Laziness David Heinemeier Hansson (“DHH”) The following is a guest post by Shane Snow, a frequent contributor to Wired and Fast Company. Last year, he wrote about his two-week Soylent experiment, which went viral and racked up 500+ comments. This post is adapted from his new book, SMARTCUTS, and it will teach you a few things: How to use strategic “laziness” to dramatically accelerate progressHow “DHH” became a world-class car racer in record time, and how he revolutionized programming (they’re related)A basic intro to computer programming abstraction Note: the technical aspects of programming have been simplified for a lay audience. Enter Shane Snow The team was in third place by the time David Heinemeier Hansson leapt into the cockpit of the black-and-pink Le Mans Prototype 2 and accelerated to 120 miles per hour. This was the 6 Hours of Silverstone, a six-hour timed race held each year in Northamptonshire, UK, part of the World Endurance Championship. And then it started to rain… MOV AL, 61h

Home - GymnasticBodies The Next 100 Years of American Conservation The Next 100 Years of American Conservation On April 19, Interior Secretary Jewell discussed the need for a course correction in the way America conserves our public lands, waters and wildlife. This week is National Park Week — a time when we celebrate the more than 400 natural, historical and cultural sites that make up the most incredible parks system on Earth. Places that attract visitors from around the world and inspire other nations to follow our lead. But being the “best” wasn’t always a forgone conclusion. During World War II, national parks fell into a state of disrepair. After the war, veterans packed up their families and drove to the national parks, looking to heal and reconnect in the way that we know getting outside can uniquely do. The state of the parks got so bad that Harper’s Magazine ran an essay in 1953 entitled, “Let’s Close the National Parks.” So that could have been the end of the story, the tombstone reading: Here lies the national parks. They grew up. #parksforall

Total Immersion: How I Learned to Swim Effortlessly in 10 Days and You Can Too Is it possible to get good at swimming late in life? Yes. (Photo: Shutterhack) Swimming has always scared the hell out of me. Despite national titles in other sports, I’ve always fought to keep afloat. I’ve tried to learn to swim almost a dozen times, and each time, my heart jumps to 180+ beats-per-minute after one or two pool lengths. No more. In the span of less than 10 days, I’ve gone from a 2-length (2 x 20 yards/18.39 meters) maximum to swimming more than 40 lengths per workout in sets of 2 and 4. At the end of January, a kiwi friend issued a New Year’s resolution challenge: he would go all of 2008 without coffee or stimulants if I trained and finished an open-water 1-kilometer race in 2008. He had grown up a competitive swimmer and convinced me that — unlike my other self-destructive habits masquerading as exercise (no-gi BJJ, etc.) — it was a life skill and a pleasure I needed to share with my future children. So why is this post only coming out now, eight months later? The Method

HACF | Helena Area Community Foundation Blog: 3,000-mile (+ 400) Reflections There is something about pilgrims that touches one's heart. And somehow people in Casa de Paz have been blessed with the presence of many of them. This is just the latest one. While I didn't know brother Zilong Wang was one of these pilgrims --"23" laps-around-the-Sun! "Buddha taught that his teachings are like boats for us to cross the river. And if you read his 3000-mile reflections you'll find: "If various religions are different ways to cross the same River of Life, why should we fight over which boat is the right, supreme boat, and sink each other before we even get half way across the river?" This young brother crossed the continent from coast to coast andnever locked his dragon horse --his bike. That's when serendipity needs to be shared in written form ;-) In his reflections he also says: "[After 74 days riding]Knocked on the doors of over 400 strangers, asking if I could camp in their backyard. "Going across the country, the number of bad people I've encountered is ZERO.

Can You Rewire Your Brain In Two Weeks? One Man’s Attempt… Can you rewire your brain in two weeks? The answer appears to be — at least partially — yes. The following is a guest post by Shane Snow, frequent contributor to Wired and Fast Company and author of the new book SMARTCUTS: How Hackers, Innovators, and Icons Accelerate Success. Last year, he wrote about his two-week Soylent experiment, which went viral and racked up 500+ comments. He knows how to stir up controversy. In this post, Shane tests the “brain-sensing headband” called Muse. It’s received a lot of PR love, but does it stand up to the hype? As many of your know, I’m a long-time experimenter with “smart drugs,” which I think are both more valuable and more dangerous that most people realize. In the meantime, I hope you enjoy Shane’s experimentation! Enter Shane Snow The electrodes needed to be adjusted to fit my sweaty head, which was apparently the largest size the product could accommodate. My stress levels were high. Calm is a simple meditation exercise: Count your breaths.