Most Fascinating Geological Wonders On Earth 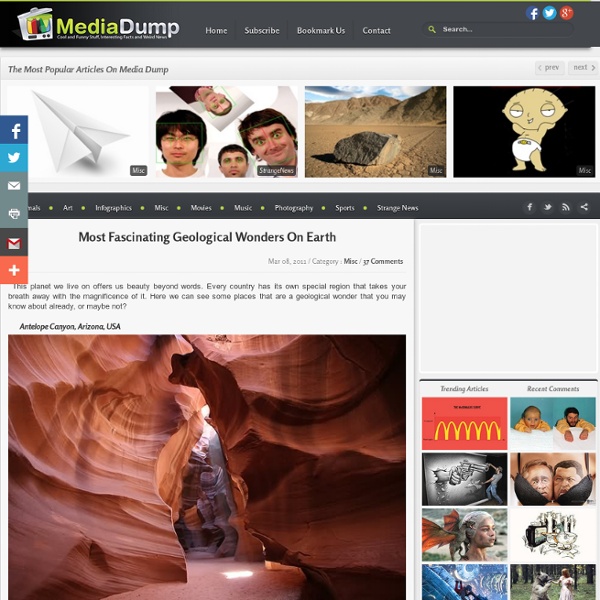 Mar 08, 2011 / Category : Misc / 37 Comments This planet we live on offers us beauty beyond words. Every country has its own special region that takes your breath away with the magnificence of it. Here we can see some places that are a geological wonder that you may know about already, or maybe not? Antelope Canyon, Arizona, USA Antelope Canyon is one of the world's most beautiful canyons. Pamukkale, Turkey These stunning terraces of water are found in Pamukkale Turkey and were shaped from a substance called travertine, which forms from the build-up of sediments of calcium carbonate deposited in water from hot springs. The Wave, Arizona, USA This incredible formation of sandstone rock is stunning in its colors. Moeraki Boulders, New Zealand The Moeraki Boulders are amazing boulders found on the New Zealand coast. Bungle Bungles, Australia Bungle Bungles are found in the the Purnululu National Park in Western Australia, also a World Heritage Site. Fantasy Cave, Bermuda Wave Rock, Australia

20 Cool Pictures of Earth from Space 20 cool pictures of Earth from Space thanks to National Geographic and a collection of amazing photographers. Bombetoka BayPhotograph courtesy Terra/ASTER/NASA and NASA Earth Observatory Sapphire waters tinged with pink sediment seem to get tangled amid emerald vegetation in a satellite picture of Bombetoka Bay, on the northwestern coast of Madagascar. To celebrate Earth Day—which today received the ultimate Internet accolade, a Google Doodle—National Geographic photo editors selected 20 of the most stunning pictures of Earth, as seen from space, including this jewel-toned shot of the island country off the African coast. Captured in 2000 by a NASA satellite, the scene shows where the salty waters of the Mozambique Channel mingle with freshwater outflow from the island's Betsiboka River. Bombetoka Bay is home to some of Madagascar's largest mangrove forests, which provide shelter for diverse mollusks and crustaceans as well as habitat for sea turtles, water birds, and dugongs.

The Girl Who Loves to Levitate (14 photos) Natsumi Hayashi is a sweet-looking Japanese girl who, one day, decided to take self-portraits..of herself levitating. She can be spotted in and around Tokyo, equipped with her SLR and her self-timer. When she feels the moment strike, she presses the shutter button down and then, quite literally, "jumps" into place. What I love most about her shots is that they don't feel forced. Natsumi has a way of making us feel as though she naturally levitates throughout life. When I asked her how others react to her jumping around Tokyo, here is a funny story that she shared.

The Tunnel Of Love Klevan is an urban-type settlement in the Rivne Raion of Rivne Oblast in western Ukraine. Its population is 7,470 as of the 2001 Ukrainian Census. Klevan is accessed via the T1B17 and H22 roads, and is located 28.3 km northwest of Rivne and 50.4 kilometres southeast of Lutsk along the H22. Klevan lies on the Stubla River. There’s a real place in the Ukraine that looks like this. Amazing Sight in the South Pacific A yacht was traveling in the south Pacific when the crew came across a weird sight. Look at these photos and try to imagine the thrill of experiencing this phenomenon. NO!!!!This is not a beach; You Built What?!: A Compact Mechanical Crossbow With the Precision of a Laser Last October, after hurting his knee playing hockey, Patrick Priebe was holed up in his apartment near Cologne, Germany, with nothing to do. He was sitting at his computer, staring at his keyboard, when the "Y" key caught his eye. Priebe didn't see a letter. To him, it looked like a crossbow.

The 40 Most Spectacular and Mindblowing Photos of Nature A lifetime is not enough to see what nature has to offer and all its beauties, along with its weirdness at times. There’s always something new happening in the world that people can hardly explain and sometimes mysteries are never solved. Pxleyes presents a stunning showcase of 40 images dedicated to the spectacular nature events from all over the world: a show of natural lights and colors, impressive rocky mountains and structures, tons of beautiful blue eyes and many other interesting elements, some almost unheard of. All images show only NATURAL elements, non altered by human hand or post editing software!

15 Spectacular Skylines Around the World Sep 21, 2010 1. Toronto, Canada Photograph by Rob Smith Photography A defining characteristic of any major city centre, skylines offer a glimpse into the development of a city’s core, typically dotted (or completely dominated) by tall buildings and signature landmarks. Almost Untouched Nature - Waterfall Restaurant, Philippines Image credit Visiting this interesting Waterfall Restaurant located in San Pablo City, Philippines at the Villa Escudero Plantations and Resort can be a truly unique and memorable experience. Visitors can enjoy in lunch served on bamboo dining tables while the crystalline running water flows under their feet. Besides enjoying the authentic local cuisine, you can enjoy the almost untouched nature of the region formerly occupied by a farm and coconut plantations.

Crystal River - The most beautiful river on earth [Pics] Cano Cristales - Crystal River. River of five colors, as the locals call it, originates in the south of the mountain chain Macarena, Colombia, and flows eastward to its confluence with the Guayabero river. In the Cano Cristales found five colors: yellow, blue, green, black and red.