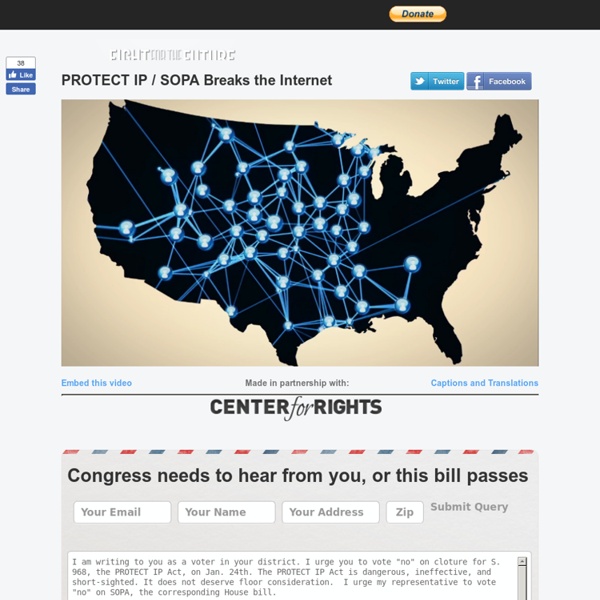 I am writing to you as a voter in your district. I urge you to vote "no" on cloture for S. 968, the PROTECT IP Act, on Jan. 24th. The PROTECT IP Act is dangerous, ineffective, and short-sighted. It does not deserve floor consideration. I urge my representative to vote "no" on SOPA, the corresponding House bill. Over coming days you'll be hearing from the many businesses, advocacy organizations, and ordinary Americans who oppose this legislation because of the myriad ways in which it will stifle free speech and innovation. The video above discusses the Senate version of the House's Stop Online Piracy Act (SOPA). PIPA would give the government new powers to block Americans' access websites that corporations don't like.

99 Resources to Research & Mine the Invisible Web College researchers often need more than Google and Wikipedia to get the job done. To find what you're looking for, it may be necessary to tap into the invisible web, the sites that don't get indexed by broad search engines. The following resources were designed to help you do just that, offering specialized search engines, directories, and more places to find the complex and obscure. Search Engines Whether you're looking for specific science research or business data, these search engines will point you in the right direction.

Barricades Come Down at Zuccotti Park, Protesters Re-Occupy Last night the barricades that have been surrounding Zuccotti Park in downtown New York finally came down after repeated complaints and letters from the National Lawyers' Guild and others. Almost immediately, protesters re-entered, as Gothamist reports: Earlier this evening, the barricades were removed and stacked off to the sides, permitting visitors to enter the park wherever their heart's desire, instead of the narrow security checkpoints. FREEDOM! But with freedom comes responsibility; according to one occupier, "Brookfield Security said unless we do something stupid the park will remain open!" Jubliant re-occupation and a tense-standoff over the People's Library followed.

Push the FreedomBox Foundation from 0 to 60 in 30 days by Ian Sullivan Beyond 60 We've reached our initial fundraising goal, but we're still going strong. More money helps us found the project stronger, reach goals faster and explore more technologies of freedom. We're proud of the Freedom Box Foundation's public roots, and we want to be able to demonstrate support and interest from as many people as possible. So thank you to everyone who has pledged so far and please, keep pledging and keep giving. #FactsWithoutWikipedia: Twitter Users Fill Wikipedia Blackout Void With Hilarious 'Facts' (TWEETS) After Wikipedia shut down at midnight on Tuesday, Jan. 18, students everywhere began to panic about how they were going to do their homework. The online encyclopedia's temporary closure is intended to signal their protest of the Stop Online Piracy Act (SOPA) and the Protect IP Act (PIPA), both of which are being considered by congress as ways to curb online piracy and copyright infringement. Instead of pages of information, visitors to Wikipedia are now greeted with a black-and-white page reads "Imagine a world without free knowledge" and a link to information on the two controversial bills. Just when students everywhere were about to throw in the towel, the Twitterverse decided that, if they couldn't have actual facts, they would be forced to make up their own. Below are a few choice tweets we found that were tagged with "#FactsWithoutWikipedia" that present some interesting and hilarious takes on the truth in a world without Wikipedia.

Surprise, Homeland Security Coordinates #OWS Crackdowns Remember when people were freaking out over the Patriot Act and Homeland Security and all this other conveniently ready-to-go post-9/11 police state stuff, because it would obviously be just a matter of time before the whole apparatus was turned against non-Muslim Americans when they started getting complain-y about the social injustice and economic injustice and income inequality and endless recession and permanent unemployment? That day is now, and has been for some time. But it’s also now confirmed that it’s now, as some Justice Department official screwed up and admitted that the Department of Homeland Security coordinated the riot-cop raids on a dozen major #Occupy Wall Street demonstration camps nationwide yesterday and today. (Oh, and tonight, too: Seattle is being busted up by the riot cops right now, so be careful out there.)

Glasnost: Test if your ISP is shaping your traffic The goal of the Glasnost project is to make ISPs' traffic shaping policies transparent to their customers. To this end, we designed Glasnost tests that enable you to check whether traffic from your applications is being rate-limited (i.e., throttled) or blocked. Glasnost tests work by measuring and comparing the performance of different application flows between your host and our measurement servers.

Occupy May Day - General Strike - Occupy May Day - General Strike at Worldwide Montreal Add Event partner HowToMake - fabfi - Top level How-To page - An open-source, city-scale wireless mesh networking system with access control and monitoring This page is a table of contents for all of the HowTo documentation on this site. Follow the links below for what you want to build. Note: We STRONGLY recommend using linux for working with fabfi. If you don't want to change your OS, run Ubuntu from a LiveCD. The most common use of a FabFi system is to extend or expand a high speed internet connection and charge users so as to recover cost of the leased bandwidth. The fabfi wireless system consists of three major components which are all open source:

Permission To Speak: Conservative Lord suggests that government “may end up regulating” the blogosphere « Richard Wilson's blog Last month Liberal Conspiracy reported on plans by David Hunt, a Conservative Member of the House of Lords, and the new head of the Press Complaints Commission, to “invite political bloggers to volunteer for regulation by the PCC’s replacement”. Hunt was also reported to have said that bloggers posed a “greater challenge” than the tabloid press, and that “At the moment, it is like the Wild West out there. We need to appoint a sheriff.” Who owns America? Hint: It's not China Editor's Note: The following piece comes from Global Post, which provides excellent coverage of world news - important, moving and odd. By Tom Mucha, Global Post Truth is elusive. But it's a good thing we have math. Our friends at Business Insider know this, and put those two principles to work today in this excellent and highly informative little slideshow, made even more timely by the ongoing talks in Washington, D.C. aimed at staving off a U.S. debt default. Here's the big idea:

Thank you for picking this pearl-this will affect the world. by kathologist Nov 18