A step toward creating an impartial, comprehensive and searchable national database of people killed during interactions with law enforcement 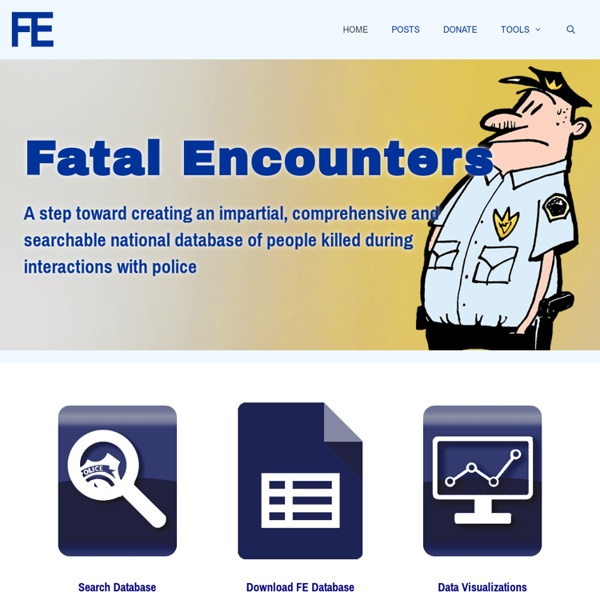 Is There Really A Revolution of Consciousness Going On? -In short a government for the people by THE PEOPLE. So, to answer the question is there really a revolution of conscious going on?’ let’s review the evidence. 1. Increasing alternative media popularity Yes, the alternative media realm is gaining more and more of the lion’s share, presenting news, views and opinions that mainstream media would not be brave enough to publish. 2. In line with the above I’ve heard it said from a number of alternative media related public speakers that their audiences are increasing in numbers. 3. In recent years there has been a continuing slump in mainstream media ratings. Consequentially, people are turning to alternative media sources for more truthful, honest reporting. 4. Last year we saw waves of protest and a groundswell of public opinion which had prevented Obama’s plans to order military intervention in Syria. 5.

What I've Learned from Two Years Collecting Data on Police Killings A few days ago, Deadspin’s Kyle Wagner began to compile a list of all police-involved shootings in the U.S. He’s not the only one to undertake such a project: D. Brian Burghart, editor of the Reno News & Review, has been attempting a crowdsourced national database of deadly police violence. We asked Brian to write about what he’s learned from his project. It began simply enough. I went home and grabbed my laptop and a glass of wine and tried to find out. A few months later I read about the Dec. 6, 2012, killing of a naked and unarmed 18-year-old college student, Gil Collar, by University of South Alabama police. I started to search in earnest. The bottom line was that I found the absence of such a library of police killings offensive. The biggest thing I’ve taken away from this project is something I’ll never be able to prove, but I’m convinced to my core: The lack of such a database is intentional. It’s the only conclusion that can be drawn from the evidence.

World Values Survey After Cops Cross “Thin Blue Line,” City Shuts Down Entire Corrupt Police Department Carey Wedler October 3, 2014 (TheAntiMedia) WALDO, FL- The city council of Waldo, Florida voted 4-1 this week to disband its corrupt police department. While police in Waldo have been recognized for mistreatment of civilians, the department came under fire over illegal ticket quotas, deceptive court appearances, and unethical storage techniques. Original story: Florida Cops Blow the Whistle on Traffic Ticket Quotas, Police Chief gets Fired The city’s seven police officers wrote nearly 12,000 speeding tickets in 2013, earning $400,000 and making up a third of the town’s revenue. Resident Pat Burgess told CBS last month: “They’re just waiting to catch people because they have to write so many tickets in order to meet the budget, and that’s wrong.” In August, five Waldo officers rebelled against their superiors and made a presentation to the city council about the malpractices. Before the conclusions of these reports, both suspended officers resigned. “It’s what was right. He continued:

Bureau of Justice Statistics (BJS) A Father’s Activism Changed the Law: Cops in WI No Longer Allowed to Investigate Themselves Lily DaneActivist Post Long before the Ferguson situation occurred, another young man named Michael Bell, Jr. was shot and killed by a police officer. Here’s his story. Ten years ago, 21-year-old Michael Bell Jr. pulled up to the house where he lived with his mom and sister in Kenosha, Wis., about an hour south of Milwaukee. Dash cam footage from inside the squad car shows Bell exiting the vehicle he was driving, where he was confronted by the officer. The police officers involved in Bell’s shooting claimed that the young man ignored commands to get back into his car, and that he fought with officers. The struggle continued, apparently, and one of the officers yelled out that Bell had his gun. Bell’s mother and sister, who were watching the altercation unfold, heard the officer as well and they tried to yell that Bell did not have the officer’s gun. Then another officer then shot Bell in the head. "She called me up: ‘Dad, you need to come to the hospital, Michael’s been shot.’ From NPR:

APA Formatting and Style Guide Summary: APA (American Psychological Association) style is most commonly used to cite sources within the social sciences. This resource, revised according to the 6th edition, second printing of the APA manual, offers examples for the general format of APA research papers, in-text citations, endnotes/footnotes, and the reference page. Contributors: Joshua M. Please use the example at the bottom of this page to cite the Purdue OWL in APA. To see a side-by-side comparison of the three most widely used citation styles, including a chart of all APA citation guidelines, see the Citation Style Chart. You can also watch our APA vidcast series on the Purdue OWL YouTube Channel. General APA Guidelines Your essay should be typed and double-spaced on standard-sized paper (8.5" x 11"), with 1" margins on all sides. Include a page header (also known as the "running head") at the top of every page. Major Paper Sections Title Page Running head: TITLE OF YOUR PAPER Image Caption: APA Title Page Abstract

Thousands of Police Turn Their Backs on NYC Mayor Thousands of police turned their backs on Mayor Bill de Blasio at the second funeral for an officer gunned down in his squad car, repeating a stinging display of scorn for a mayor who many officers say is anti-police. New York City Mayor Bill de Blasio and Police Commissioner William Bratton eulogized Officer Wenjian Liu on Sunday as an incarnation of the American dream: a man who had emigrated from China at age 12 and devoted himself to helping others in his adopted country. The gesture among officers watching the mayor's speech on a screen outside a Brooklyn funeral home added to tensions between de Blasio and rank-and-file police even as he sought to mollify them. "Let us move forward by strengthening the bonds that unite us, and let us work together to attain peace," de Blasio said. Bratton and de Blasio planned a news conference at police headquarters Monday. Liu's weeping, father, Wei Tang Liu, said that his only child used to call after every shift to say: "I'm coming home today.

VICTORY: Citizens Stand up to Agenda 21 in Alaska By Dan Johnson The average planning and zoning meeting consists of the planning and zoning commissioners, a room, and very little else. They are often dry meetings dealing with rules and regulations for business and home licensing, property lines, and nuisance ordinances. So when the Borough of Kodiak, AK (Pop. 13,600) chose to attempt to entirely revamp the zoning code and place greater restrictions on property owners, including a $1,000 fine per violation, they expected there to be little opposition, and little knowledge of the change. Instead, the Solutions Institute assisted local resident Jamie Fagan, and he along with a team of people rallied over 300 residents to attend the meeting. Even though many residents could not attend due to flooded roads and driving rain, there were over 69 speeches, nearly all in opposition to the new code, totaling over 4 hours of testimony against it. Jamie was excited to have some assistance defending his home: You Might Also Like