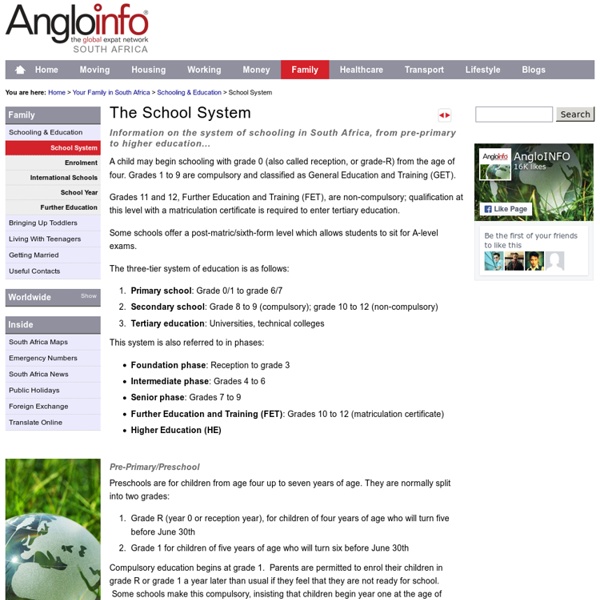 A child may begin schooling with grade 0 (also called reception, or grade-R) from the age of four. Grades 1 to 9 are compulsory and classified as General Education and Training (GET). Grades 11 and 12, Further Education and Training (FET), are non-compulsory; qualification at this level with a matriculation certificate is required to enter tertiary education. Some schools offer a post-matric/sixth-form level which allows students to sit for A-level exams. The three-tier system of education is as follows: Primary school: Grade 0/1 to grade 6/7 Secondary school: Grade 8 to 9 (compulsory); grade 10 to 12 (non-compulsory) Tertiary education: Universities, technical colleges This system is also referred to in phases: Foundation phase: Reception to grade 3 Intermediate phase: Grades 4 to 6 Senior phase: Grades 7 to 9 Further Education and Training (FET): Grades 10 to 12 (matriculation certificate) Higher Education (HE) Pre-Primary/Preschool Compulsory education begins at grade 1. Primary school

Education in South Africa According to the Bill of Rights of South Africa's Constitution, all South Africans have the right to a basic education, including adult basic education and access to further education. The state has an obligation, through reasonable measures, to progressively make this education available and accessible. South Africa has one of the highest rates of public investment in education in the world. At about 7% of gross domestic product (GDP) and 20% of total state expenditure, the government spends more on education than on any other sector. Government spending on basic education during 2015/16 is estimated at R203 468 billion. Over the next three years, roughly R640 billion will go towards basic education. English-speaking countries: South Africa - Learning English Online In 1994, Archbishop Desmond Tutu described South Africa as "a rainbow nation at peace with itself and the world". The term was intended to encapsulate the unity of multi-culturalism and the coming-together of people of many different nations, in a country once identified with a strict division of white and black. Geography The Republic of South Africa is one of the 54 states of the African continent.

Canada Facts: Interesting Canada Facts for Kids 25 Amazing Facts about Canada Here on this page about Canada Facts you will find 25 fascinating facts and interesting information - not only for kids but for all who want to know more about this wonderful country. Canada is the second largest country in the world after Russia. The country is divided into ten provinces and three territories. This huge country in North America has lots of superlatives on offer. 25 Canada Facts and Amazing Canada Superlatives South Africa Map / Geography of South Africa / Map of South Africa Archeologists report evidence that humans have inhabited Southern Africa for more than 100,000 years. Over many modern centuries assorted African tribes moved steadily south to populate the country we now call South Africa. Bantu peoples began migrating across sub-Saharan Africa from the Niger River Delta around 2,500 years ago, and arrived in South Africa in small waves setting up small villages. By 1200 AD a trade network emerged, and the premise of a sacred leadership took hold. Then, in 1487, Bartolomeu Dias, a Portuguese explorer, became the first European to land in southern Africa. However, it wasn't until 1652, a century and a half after the discovery of the Cape Sea Route, that the Dutch East India Company founded a station at what would later become Cape Town.