Life In The Trenches 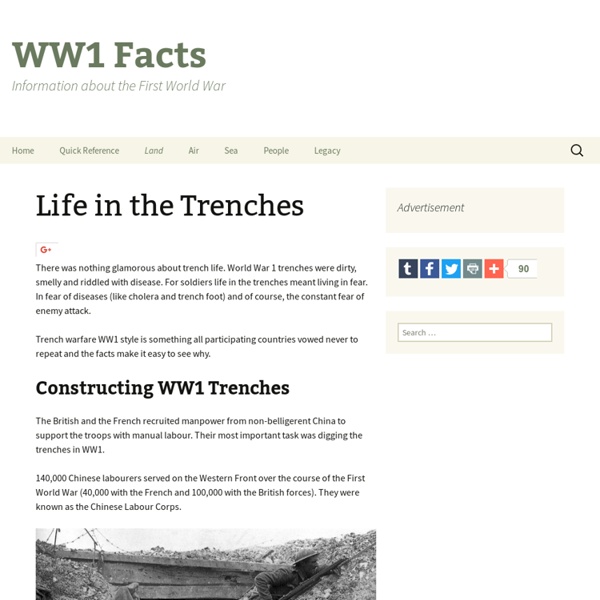 There was nothing glamorous about trench life. World War 1 trenches were dirty, smelly and riddled with disease. For soldiers life in the trenches meant living in fear. In fear of diseases (like cholera and trench foot) and of course, the constant fear of enemy attack. Trench warfare WW1 style is something all participating countries vowed never to repeat and the facts make it easy to see why. Constructing WW1 Trenches The British and the French recruited manpower from non-belligerent China to support the troops with manual labour. 140,000 Chinese labourers served on the Western Front over the course of the First World War (40,000 with the French and 100,000 with the British forces). No Man’s Land The open space between two sets of opposing trenches became known as No Man’s Land because no soldier wanted to traverse the distance for fear of attack. The climate in France and Belgium was quite wet, so No Man’s Land soon became a mud bath. Hell on Earth Related:  Trench Life: The Forgotten Stories • World War 1914-1918 • World War 1

You are the Fleet Admiral of the Navy in WWI what do you do? The Situation You’re the Fleet Admiral of the Navy in World War I. Your ships are being sunk at an alarming rate by the devastatingly effective German U-Boat. The traditional camouflage isn’t working because your environment (sea and sky) changes with the weather. What do you do? This is the German U-Boat Sinking your Battleships The Insight It’s not where you are it’s where you’re going World War I occurred from 1914–1918; back then sinking an enemy battleship was a three-step process: Step 1: Locate your target’s position and plot its course. *Remember this is early 20th century warfare, weapons don’t travel at the speed they do today So what’s your solution Fleet Admiral? Forget about not being seen, that only solves their first problem. British Artist and naval officer Norman Wilkinson had this very insight and pioneered the Dazzle Camouflage movement (known as Razzle Dazzle in the United States). It was cheap, effective, and widely-adopted during the War. Photograph by monacoeye.com

WW1 Trenches: Facts About World War I Trench Warfare Trench warfare is a type of fighting where both sides dig deep trenches in the ground as a defence against the enemy. The World War 1 trenches could stretch many miles and made it almost impossible for one side to advance on the other. The Western Front in World War 1, located in France, was fought using trench warfare. Facts about World War 1 Trenches It is estimated that there were about 2,490km of trench lines dug during World War 1. The trenches were dug by soldiers and there were three ways to dig them. More Amazing WW1 Trench Facts Looking for more information on World War I? Other Posts You Might Enjoy! World War I Facts World War 1 was a military conflict lasting from 1914 to 1918 which involved nearly all the biggest powers of the world. May 5, 2014 In "History" How Did World War 1 Start? Over 17 million people were killed in the First World War and the impact it had on the old empires and the politics of the world was enormous, but what were the causes of WW1 and how did it start?

Viewpoint: 10 big myths about World War One debunked 25 February 2014Last updated at 15:45 GMT Much of what we think we know about the 1914-18 conflict is wrong, writes historian Dan Snow. No war in history attracts more controversy and myth than World War One. For the soldiers who fought it was in some ways better than previous conflicts, and in some ways worse. By setting it apart as uniquely awful we are blinding ourselves to the reality of not just WW1 but war in general. 1. Fifty years before WW1 broke out, southern China was torn apart by an even bloodier conflict. Although more Britons died in WW1 than any other conflict, the bloodiest war in our history relative to population size is the Civil War, which raged in the mid-17th Century. 2. In the UK around six million men were mobilised, and of those just over 700,000 were killed. In fact, as a British soldier you were more likely to die during the Crimean War (1853-56) than in WW1. 3. Front-line trenches could be a terribly hostile place to live. 4. 5. Continue reading the main story

In the trenches of 1914-1918 What were the trenches? Although most of us think primarily of the Great War in terms of life and death in the trenches, only a relatively small proportion of the army actually served there. The trenches were the front lines, the most dangerous places. Why were the trenches there? The idea of digging into the ground to give some protection from powerful enemy artillery and small arms fire was not a new idea or unique to the Great War. What were the trenches like? The type and nature of the trench positions varied a lot, depending on the local conditions. The bird's-eye view (below, from an official infantry training manual of March 1916) shows a typical but very stylised trench layout. Behind it is another line, similarly made, called a support line. The enemy had a very similar system of trenches. A typical trench system consisting of three main fire or support trenches, connected by communication trenches and with various posts, strong points and saps. Keep your head down!

Operation War Diary WW1 Facts | Information About The First World War BBC iWonder - How did 12 million letters reach WW1 soldiers each week? Front Line: Life in the Trenches of WWI If you were a soldier fighting in the First World War, what would you see? What would you hear? With only 20 WWI veterans left in the world, fewer and fewer people are able to answer these questions with certainty. For everyone else, there's Front Line. Trenches: In this page, you'll find information on the construction of trenches, their layout, the hygiene (or lack thereof) of trenches, the cold, and how burials were handled in trench warfare. Routine: On here, you'll find information on the day-to-day life of the soldiers in the trenches: for example, the food they ate, their various duties, and the ways they attempted to cope. Warfare: This page details the "warfare" part of "trench warfare." Traumas: Trench Warfare was a horrific experience for most of the soldiers. Game: This is a choose-your-own-adventure style game that attempts to recreate the experience of trench warfare. About Front Line 2008 marks the 90th anniversary of the Armistice that ended the First World War. Contact Me