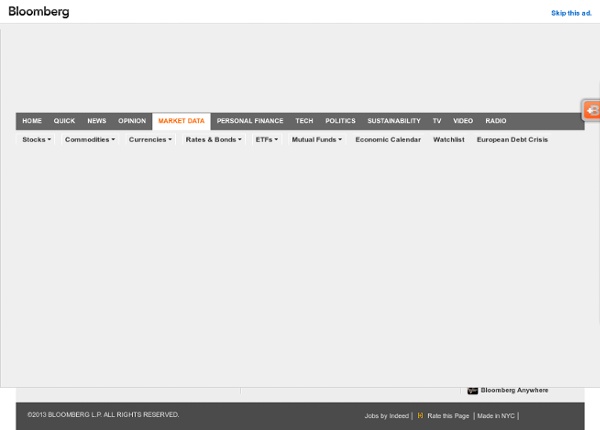 Chart of the Day - www.chartoftheday.com Notes:- The market is at a critical juncture. Where we go from here may surprise you. Find out now with the exclusive & highly regarded charts of Chart of the Day Plus. Quote of the Day"Money is better than poverty, if only for financial reasons." - Woody Allen Events of the Day July 01, 2007 - Canada DayJuly 04, 2007 - US Independence DayJuly 07, 2007 - Running of the Bulls begins in Pamplona, Spain (ends 7/14)July 10, 2007 - Baseball All-Star Game Google Finance Express.co.uk - 1 hour ago NEW betting shops could be banned from Britain's high streets under tough rules set to be announced by the Government. By: Owen Bennett - Political Reporter. Telegraph.co.uk - 28 minutes ago OPHIR Energy has targeted rival Premier Oil with two bids in the last three months as it attempts to create the fifth largest oil exploration company listed in London. Telegraph.co.uk - Apr 25, 2014 On the face of it, closer scrutiny of whether borrowers can easily afford their mortgage repayments seems perfectly reasonable given the threat of interest rate rises and negative equity in a volatile housing market. The Drum - 18 hours ago The merger supposed to create the world's biggest advertising group is in trouble according to reports. Moneycontrol.com - 5 hours ago Listed in London, 78 percent stakes in the Essar Energy is held by the Essar Group.

Stock market Size of market[edit] Stocks are partitioned in various ways. One common way is by the country where the company is domiciled. For example, Nestle, Roche, and Novartis are domiciled in Switzerland, so they are part of the Swiss stock market. The size of the world stock market was estimated at about $36.6 trillion at the beginning of October 2008.[1] The total world derivatives market has been estimated at about $791 trillion face or nominal value,[2] 11 times the size of the entire world economy.[3] The value of the derivatives market, because it is stated in terms of notional values, cannot be directly compared to a stock or a fixed income security, which traditionally refers to an actual value. Moreover, the vast majority of derivatives 'cancel' each other out (i.e., a derivative 'bet' on an event occurring is offset by a comparable derivative 'bet' on the event not occurring). Stock exchanges[edit] Trade[edit] Market participants[edit] History[edit] Importance of stock market[edit]

Early Investor Lockup Expires, But Facebook Gains Anyway Wally Pfister is nervous—and with good reason. In a few hours, Pfister, 52, will slip into his best suit and head from his house in the Hollywood Hills to Westwood’s Regency Village Theater for the red-carpet premiere of his new movie, Transcendence. For most filmmakers Pfister’s age, this would be a moment to bask in. A luxurious $100 million budget. A sterling cast led by Johnny Depp, Morgan Freeman, Rebecca Hall, Kate Mara, and Paul Bettany. And a thought-provoking story about a brilliant scientist named Will Caster (Depp) whose heartbroken wife Evelyn (Hall) uploads his brain into a supercomputer after he dies—transforming him into a kind of omnipresent, omnipotent, and possibly malevolent digital god. But Pfister isn’t most filmmakers his age. “This is a very difficult period right now—being in limbo,” he admits. But Pfister was getting antsy, as usual. We’re sitting in Pfister’s rec room—his man cave, of sorts. Pfister looks exhausted too. Pfister offers me a glass of water. Why?

Today’s Market Winners and Losers The stock market is down Monday, with the Dow Jones Industrial Average down 0.08%, the Nasdaq down 0.02% and the S&P 500 down 0.01%. Today’s winners include two companies getting bought out and a pharmaceutical company reporting strong results for a late-stage drug trial. Today’s losers include a health company short on cash and a pharmaceutical firm with poor results on a late-stage drug trial. These are Monday’s market winners and losers. Biggest Winners Shares of Titanium Metals Corp. Shares of Gilead Sciences Inc. Shares of Jefferies Group Inc. Biggest Losers Shares of Clovis Oncology Inc. Shares of Star Scientific Inc. Samuel Weigley