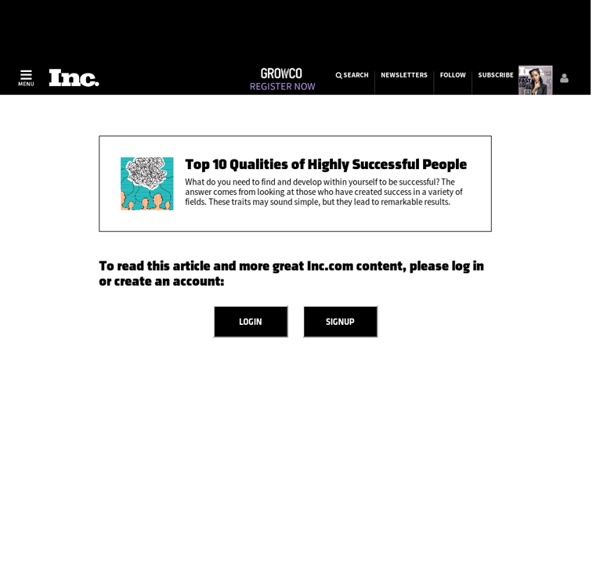 7 Qualities of Uber-Productive People Some people get more done than others--a lot more. Sure, they work hard. And they work smart. But they possess other qualities that make a major impact on their performance. They do the work in spite of disapproval or ridicule. Work too hard, strive too hard, appear to be too ambitious, try to stand out from the crowd. Pleasing the (average-performing) crowd is something remarkably productive people don't worry about. They hear the criticism, they take the potshots, they endure the laughter or derision or even hostility--and they keep on measuring themselves and their efforts by their own standards. And, in the process, they achieve what they want to achieve. They see fear the same way other people view lunch. One of my clients is an outstanding--and outstandingly successful--comic. Yet he still has panic attacks before he walks onstage. He's still scared. Anyone hoping to achieve great things gets nervous. They can still do their best on their worst day. Most people wait for an idea.

James Clear: How to Stop Procrastinating by Using the 'Two-Minute Rule' Recently, I've been following a simple rule that is helping me crush procrastination and making it easier for me to stick to good habits at the same time. I want to share it with you today so that you can try it out and see how it works in your life. The best part? It's a simple strategy that couldn't be easier to use. Here's what you need to know. How to Stop Procrastinating With the "Two-Minute Rule" I call this little strategy the "Two-Minute Rule," and the goal is to make it easier for you to get started on the things you should be doing. Here's the deal: Most of the tasks that you procrastinate on aren't actually difficult to do -- you have the talent and skills to accomplish them -- you just avoid starting them for one reason or another. The two-minute rule overcomes procrastination and laziness by making it so easy to start taking action that you can't say no. There are two parts to the two-minute rule... Part One: If it takes less than two minutes, then do it now. Try It Now

Start Every Day as a Producer, Not a Consumer I have to agree that my most productive days are those where I don't allow myself to read the news, check e-mail, facebook, etc., right after I get up. However, that happens because I've got a ton of stuff to get done, and the outside world takes a back seat until my workload is under control. However, there are certain biological necessities that have to happen before I can be productive. The dog gets let out, I go to the bathroom, I eat/drink something, and *then* I sit down to be productive. I also *have* to check my e-mail, because if something blew up overnight or there's something that needs to be dealt with ASAP, I need to know as early as possible. I've found that reading my e-mail on my phone curbs the impulse to respond to everything immediately, because composing a lengthy e-mail on a tiny touchscreen sucks. Flagged

Daily Rituals: A Guided Tour of Writers’ and Artists’ Creative Habits by Maria Popova Hemingway wrote standing, Nabokov on index cards, Twain while puffing cigars, and Sitwell in an open coffin. “We are spinning our own fates, good or evil, and never to be undone,” the William James’s famous words on habit echo. “Every smallest stroke of virtue or of vice leaves its never so little scar.” Given this omnibus of the daily routines of famous writers was not only one of my favorite articles to research but also the most-read and -shared one in the entire history of Brain Pickings, imagine my delight at the release of Daily Rituals: How Artists Work (public library) by Mason Currey, based on his blog of the same title. Currey, who culled the famous routines from a formidable array of interviews, diaries, letters, and magazine profiles, writes in the introduction: The notion that if only we could replicate the routines of great minds, we’d be able to reverse-engineer their genius is, of course, an absurd one — yet an alluring one nonetheless. Donating = Loving

How To be so Productive You Can't Stand it You might think that creatives as diverse as Internet entrepreneur Jack Dorsey, industrial design firm Studio 7.5, and bestselling Japanese novelist Haruki Murakami would have little in common. In fact, the tenets that guide how they – and exceptionally productive creatives across the board – make ideas happen are incredibly similar. Here are 10 laws of productivity we’ve consistently observed among serial idea executors: 1. Break the seal of hesitation. A bias toward action is the most common trait we’ve found across the hundreds of creative professionals and entrepreneurs we’ve interviewed. 2. When our ideas are still in our head, we tend to think big, blue sky concepts. 3. Trial and error is an essential part of any creative’s life. To avoid ‘blue sky paralysis,’ pare your idea down to a small, immediately executable concept. 4. When working on in-depth projects, we generate lots of new ideas along the way. 5. 6. 7. 8. Few activities are more of a productivity drain than meetings. 9.

traits of the disciplined mind Here’s How The World’s Most Brilliant Minds Scheduled Their Days Sources: RJ Andrews Infowetrust.com Mason Currey’s Daily Rituals: Stop Procrastinating by "Clearing to Neutral" By Thanh Pham We often procrastinate because there is this one hidden thing holding us back. It is this one thing that makes you procrastinate and most people are not even aware what this is, but if you eliminate it you can say goodbye to procrastination forever. Friction A lot of times we procrastinate because we have to jump through a lot of hurdles before we can do the thing we actually want to do. To put it in other words, before you can do your main activity (cooking), you have to all these others things (cleaning) before you can get to your main activity. If you make it hard for yourself to get started, that’s when you will most likely procrastinate. Now imagine you actually cleaned your desk and now you need to do some work on your computer. All these little starting points where you have friction are very common. Now this is where, as we at Asian Efficiency like to call it, the habit of Clearing To Neutral (CTN) comes in. More Examples Next Steps

How the 'Seinfeld Strategy' Can Help You Stop Procrastinating Reader Resource Join Entrepreneur's The Goal Standard Challenge and make 2017 yours. Learn more » Jerry Seinfeld is one of the most successful comedians of all-time. He is regarded as one of the "Top 100 Comedians of All-Time" by Comedy Central. Seinfeld reached his peak in earnings when he made $267 million dollars in 1998. By almost any measure of wealth, popularity, and critical acclaim, Jerry Seinfeld is among the most successful comedians, writers, and actors of his generation. However, what is most impressive about Seinfeld's career isn't the awards, the earnings, or the special moments -- it's the remarkable consistency of it all. Compare his results to where you and I often find ourselves. What's the difference? I'm not sure about all of his strategies, but I recently discovered a story that revealed one of the secrets behind Seinfeld's incredible productivity, performance, and consistency. Related: Forget Setting Goals. The "Seinfeld Strategy" "After a few days you'll have a chain.

How We Spend Our Days Is How We Spend Our Lives: Annie Dillard on Presence Over Productivity by Maria Popova “The life of sensation is the life of greed; it requires more and more. The life of the spirit requires less and less.” The meaning of life has been pondered by such literary icons as Leo Tolstoy (1904), Henry Miller (1918), Anaïs Nin (1946), Viktor Frankl (1946), Italo Calvino (1975), and David Foster Wallace (2005). From The Writing Life (public library) by Annie Dillard — a wonderful addition to the collected wisdom of beloved writers — comes this beautiful and poignant meditation on the life well lived, reminding us of the tradeoffs between presence and productivity that we’re constantly choosing to make, or not: How we spend our days is, of course, how we spend our lives. She goes on to illustrate this existential tension between presence and productivity with a fine addition to history’s great daily routines and daily rituals: The most appealing daily schedule I know is that of a turn-of-the-century Danish aristocrat. There is no shortage of good days. Share on Tumblr

17 Small Productivity Habits The Mini-Habit The idea behind mini habits is that you can get to a larger habit if you start small, create simple goals, and aim for consistency. In his book Mini Habits: Small Habits, Bigger Results, Stephen Guise gives the example of “The One Pushup Challenge.” He was doing what a lot of us do. In Habit Stacking: 97 Small Life Changes That Take Five Minutes or Less, author S. The core idea behind the mini-habits concept is that you can build a major habit by thinking small enough to get started. Habit-Stacking The purpose of habit-stacking is to create simple and repeatable routines (managed by a checklist). According to Scott there are 8 Elements of a habit-stacking routine. Each habit takes less than five minutes to complete.It’s a complete habit.It improves your life.It’s simple to complete.The entire routine takes less than 30 minutes.It follows a logical process.It follows a checklist.It fits your life. 17 Small Productivity Habits #1 Drink a Large Glass of Water #2. #3. #4. #5. #6.

How to Finish Your Work, One Bite at a Time “How do you eat an elephant? One bite at a time.” If you’ve ever ran more than a few miles, you probably understand why you need to pace yourself. Runners that sprint at the start of a race will be exhausted far before they cross the finish line. The same principle applies when trying to get work done. One solution for pacing my work that I’ve found incredibly effective is maintaining weekly/daily to-do lists. Weekly/Daily To-Do Lists The principle behind the WD To-Do List method is simple: At the end of the week, write a list containing everything you want to get accomplished.At the end of the day, write a list containing what parts of that weekly list you want to be finished tomorrow. After you finish your daily list, you stop. Although this technique might sound obvious (and it is), there are some key advantages using a WD system has over the typical, Getting Things Done approach of keeping Next Action or project lists. Why the Weekly/Daily To-Do List System Rocks: Focus on the Daily List

5 Unusual Ways to Start Working Smarter, Not Harder, Backed by Science One of the things I love about the culture at Buffer is the emphasis on working smarter, not harder. Our team is all about getting plenty of sleep, exercise and recreation time so that our time spent working is as productive as it can be. Working harder can be an easy habit to slip into, though. Sometimes it’s hard to switch off at the end of the day, or to take time out on the weekend and stop thinking about work. With a startup of my own to run, I find this even harder to manage lately. If this happens to you, too, here are five methods to try that’ll help get you working smarter, not harder. 1. In one of my favorite books, Stephen Covey tells a story about a woodcutter whose saw gets more blunt as time passes and he continues cutting down trees. The analogy is an easy one to remember, but harder to put into practice. Sharpen the Saw means preserving and enhancing the greatest asset you have–you. Just getting away from work and having a rest can be a good start. 2. 3. 4. 5. P.S.