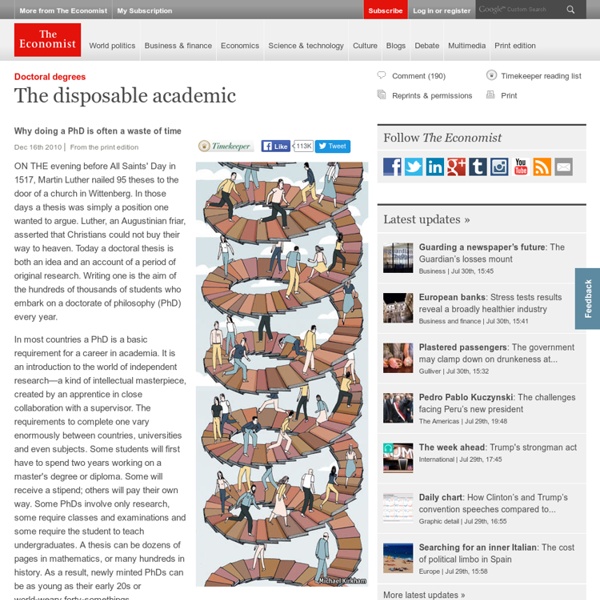 ON THE evening before All Saints' Day in 1517, Martin Luther nailed 95 theses to the door of a church in Wittenberg. In those days a thesis was simply a position one wanted to argue. Luther, an Augustinian friar, asserted that Christians could not buy their way to heaven. Today a doctoral thesis is both an idea and an account of a period of original research. Writing one is the aim of the hundreds of thousands of students who embark on a doctorate of philosophy (PhD) every year. In most countries a PhD is a basic requirement for a career in academia. One thing many PhD students have in common is dissatisfaction. Whining PhD students are nothing new, but there seem to be genuine problems with the system that produces research doctorates (the practical “professional doctorates” in fields such as law, business and medicine have a more obvious value). Rich pickings Other countries are catching up. Indeed, the production of PhDs has far outstripped demand for university lecturers.

How to Write a Research Statement Task #1: Understand the Purpose of the Research Statement The primary mistake people make when writing a research statement is that they fail to appreciate its purpose. The purpose isn’t simply to list and briefly describe all the projects that you’ve completed, as though you’re a museum docent and your research publications are the exhibits. “Here, we see a pen and watercolor self-portrait of the artist. This painting is the earliest known likeness of the artist.

Why Lead Used to Be Added To Gasoline Today I found out why lead used to be added to gasoline. “Tetraethyl lead” was used in early model cars to help reduce engine knocking, boost octane ratings, and help with wear and tear on valve seats within the motor. Due to concerns over air pollution and health risks, this type of gas was slowly phased out starting in the late 1970’s and banned altogether in all on-road vehicles in the U.S. in 1995. For a more detailed explanation of why lead used to be added to gasoline, it’s necessary to understand a little bit more about gasoline and what properties make it a good combustion material in car engines. Gasoline itself is a product of crude oil that is made of carbon atoms joined together into carbon chains.

Study finds that Ph.D.s who write interdisciplinary dissertations earn less Everyone, it seems, loves the idea of scholars interdisciplinary work. But does academe reward those -- particular young scholars -- who actually do it? A new study, based on data from all people who earned Ph.D.s in 2010, suggests the opposite. In the year after earning their doctorates, those in the cohort who did interdisciplinary dissertations earned, on average, $1,700 less than those who completed dissertations in a single field. The study was conducted by Kevin M. Kniffin and Andrew S. Fancy Scrolling Sites In the last year or so, there's been enough sites that do fancy things when you scroll down that it's kind of a trend. I thought I'd blog it, you know, for the sake of history. By "fancy things" I mean something happens when scrolling down besides the site scrolling down. Elements might move around in unexpected ways or change their size/shape/color/content in some way. It's easier to just experience some of these yourself than listen to me try to fumble through explaining it. These screenshots also don't do much justice.

VrayWorld - Scripts & Plugins for 3d environment creation We categorized all those tools for easier research and study according to the usage they have in the creation of our environment. So we have four different categories. Terrain - Vegetation - Rocks & Pavements - Scattering. White definitions of merit and admissions change when they think about Asian Americans, study finds NEW YORK -- Critics of affirmative action generally argue that the country would be better off with a meritocracy, typically defined as an admissions system where high school grades and standardized test scores are the key factors, applied in the same way to applicants of all races and ethnicities. But what if they think they favor meritocracy but at some level actually have a flexible definition, depending on which groups would be helped by certain policies? Frank L.

Build a parallax scrolling website: 10 pro tips The term 'parallax' refers to the apparent movement of objects when viewed from different positions. The technique was originally used in 2D video games where background images moved slower than foreground images, creating an illusion of depth. Who would have thought something popularized in 1982 arcade game Moon Patrol would become a major trend for web design 30 years later! The Dark Side of the Moon (Landing) Some dispute that the U.S. sent a man to the moon. Astronaut Buzz Aldrin is the second man to walk on the moon’s surface in 1969 By Judy Berman Over eight days during July 1969, all eyes were on Apollo 11, when it became the first manned mission to land on the moon. More than 40 years after this historic event, about 6 percent of Americans still dispute that we ever set foot on the moon.

Universities should do more to keep women in science, say MPs Andrew Miller MP, Chair of the Committee, said: "It is astonishing that women still remain under-represented at professorial levels in academia across every scientific discipline. It’s time for universities to pull their socks up.”Some universities are doing a great job at improving working conditions for women scientists, but others are not. The system of short term contracts is hugely off-putting for many women scientists. More standardisation is required across the whole higher education sector and that is why we have called for Government, universities and research councils to review the academic careers structure, so that talented women, and men, can have more stable career pathways." The Committee was also disappointed that BIS funding for the UK Resource Centre for Women in Science, Engineering and Technology (UKRC) was significantly cut during the 2010 Spending Review.